The Instapaper for video service, Watchlater has updated its iOS app today with new features, including an improved user interface, the ability to discover public playlists, browsing through podcast and YouTube channels, and more. The company announced this release just as it also shared that it has amassed over 100,000 users, all of whom contributed towards the 1.15 million monthly video views the service has generated.

The company tells us that now that it has achieved a “very active user engagement”, the time is right to focus on growing its user base. 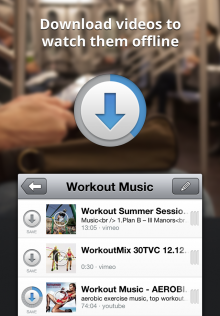 We asked how important it was to update the user interface. Watchlater co-founder Eray Basar tells us that it plays a central role in the service’s value proposition. It now allows users to swipe over a video to jump to the next one, features a responsive video player, instant results when searching for a video, and the ability to resume a video from where you left off. He believes that with this “polished and simple UI”, it will create a good viewing experience for the user.

Other changes to Watchlater include:

If you’re not familiar with Watchlater, then you might like to know that it’s an app that allows you to download videos to watch later at your leisure. The company says that it supports over 40 video platforms, including YouTube, Vimeo, TED, Blip.tv, College Humor, and more. Its discovery feature allows you to integrate your Facebook, Twitter, and Google Reader streams so it can detect when new videos from your friends or subscriptions have shared them. Videos are stored locally on the device, but Watchlater says they can also be streamed from the Internet.

The company believes that there are several mobile/tablet use cases where it fixes a “quite broken” experience: The first of which is the ability to watch videos without dealing with buffering while on the road. Secondly, being able to create and watch video playlists instantly — similar to what Spotify offers for music through its offline mode. Lastly, while YouTube is used as a music jukebox on the desktop, its mobile experience is lacking in that there’s no background playing or continuous playlists. Watchlater believes it has overcome that problem.

While an interesting concept, Watchlater isn’t the only app in the marketplace to provide this service. Video watchers may prefer using other apps like Roadshow and Pocket. The company says there won’t be any issues surrounding DMCA or piracy issues — users can only access saved videos through its app and raw files are not allowed to be downloaded.

With the release of Watchlater 3.0, the company is making it free for a limited time. Under normal circumstances, it would cost $1.00 to download from the Apple App Store. Basar says that an Android version is in its future.