With professional athletics inevitably comes debauchery. That’s just how it is.

England soccer legend Paul Gascgoine notoriously had his best performances after coke and brandy-fueled benders. Iconic baseball player Wade Boggs reportedly downed 107 beers in a single day. Even the comparatively low-key world of gymnastics is no stranger to controversy. Dutch gymnast Yuri van Gelder lost out on a major competition after snorting blow a few days beforehand and failing a crucial drugs test.

I mention this because I’m in Berlin at the PlayerUnknown Battlegrounds (PUBG) Global Invitational event. It’s a bit like the FIFA World Cup, but for people who are unhumanly good at this one specific video game.

Because I’m a proper nosy bastard, I decided to let myself into the player lounge. This tiny, whitewashed corner of the Mercedes-Benz Arena is where teams relax between contests. I wanted to see how the best PUBG players in the world spend their time when they’re not chained to their Alienwares.

If you were expecting tables covered in cocaine residue and M&M’s bowls with the brown ones carefully extracted, get ready to be disappointed. The player’s lounge was strangely wholesome, and felt more like a sixth-form common room than a hangout for professional athletes of the 21st century.

A quiet place away from the madness

The player lounge consisted of several circles of couches. During my brief walk-around, I noticed that teams tended to stick together. That’s hardly surprising, given the hugely international nature of this event, and the inevitable language barrier that follows.

PUBG’s Global Invitational has teams from all around the world, including Europe, North America, South America, China, Japan, Thailand, Australia, and South Korea.

From walking around the stadium, it’s clear that the majority of spectators flew from China and South Korea, where PUBG is incredibly popular.

Several television screens were dotted around the place, allowing players and their support staff to see what was happening on the main stage in real-time.

Because every team shares the same room, each player gets their own locker to store their valuables in. That’s handy for when they’ve got to go on stage!

So, let’s talk about catering. Unsurprisingly, sugar and carbohydrates are the order of the day here. By the lockers, there’s a set of shelves packed to the rafters with self-serve candy, chocolate, and cereal bars. 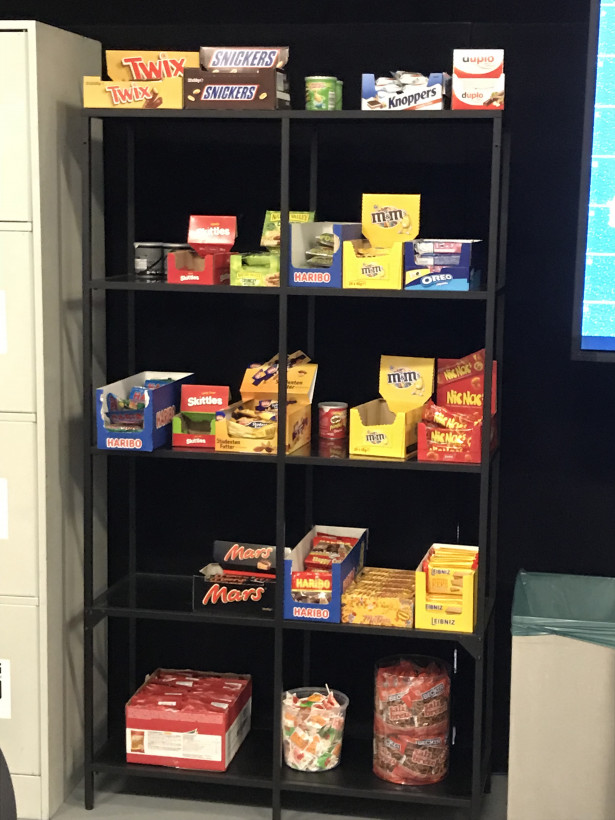 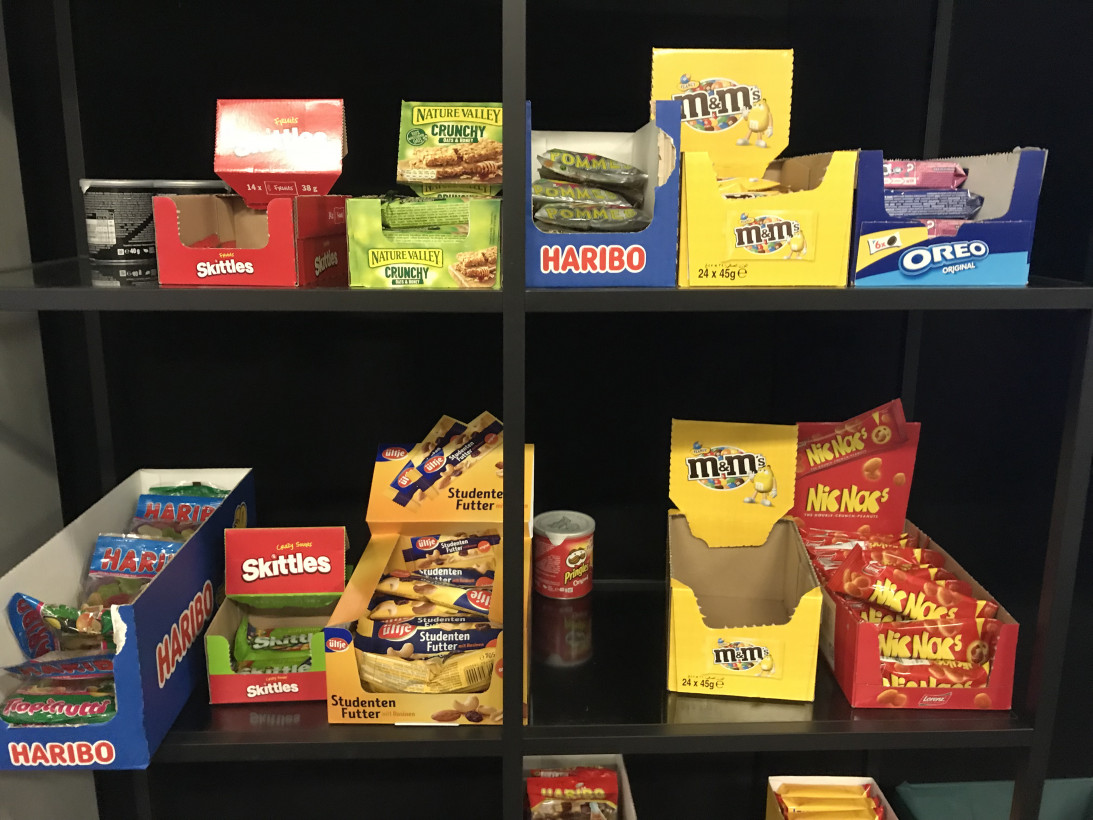 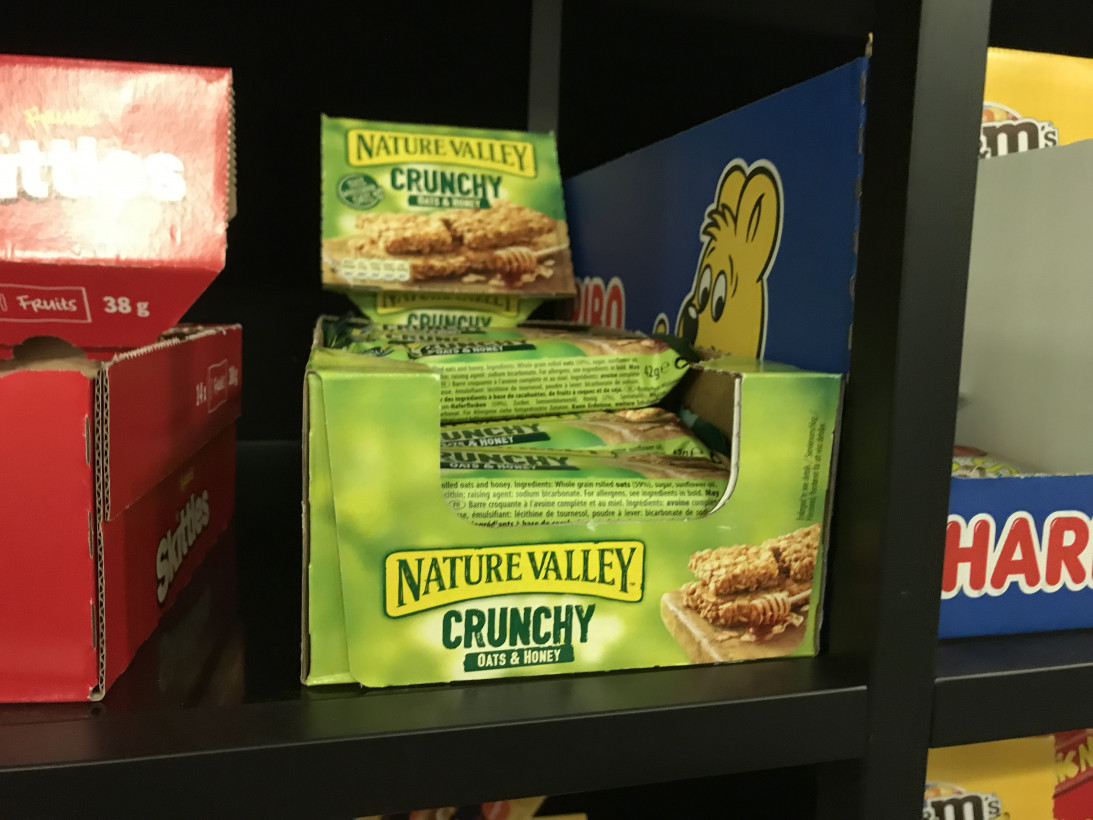 Another table has more wholesome fare: pretzels, fruit, and cakes. 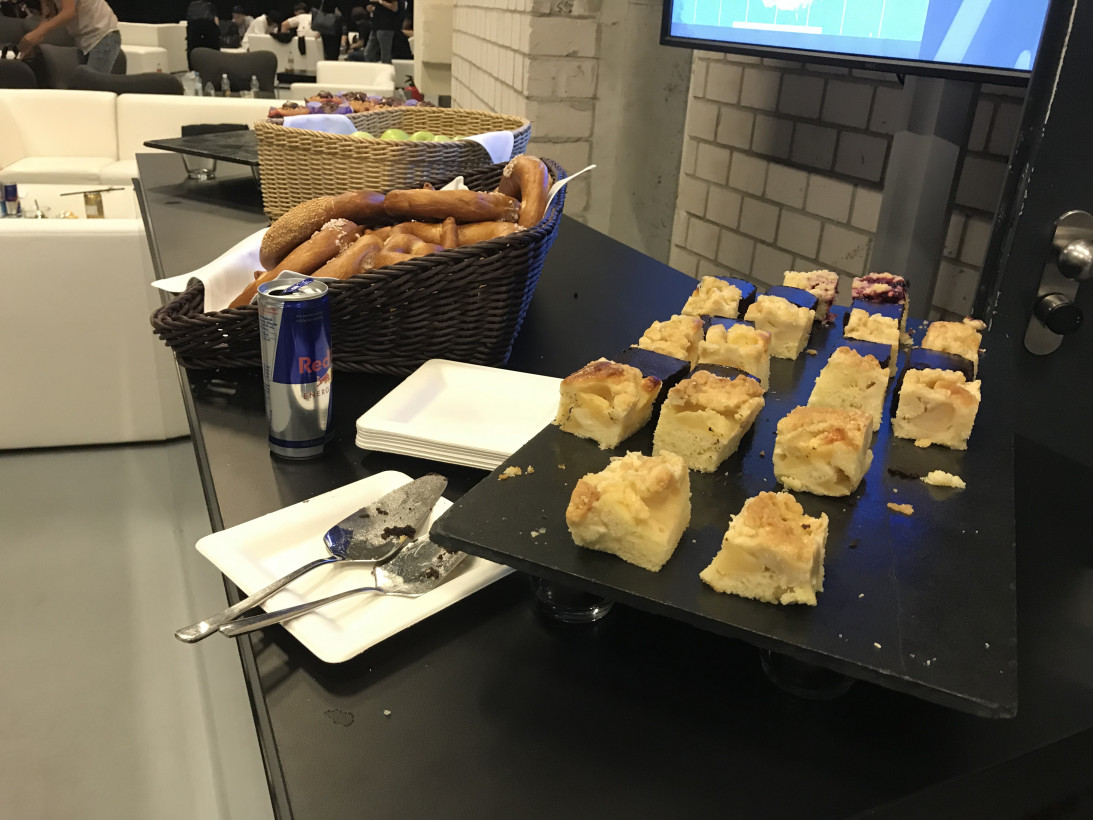 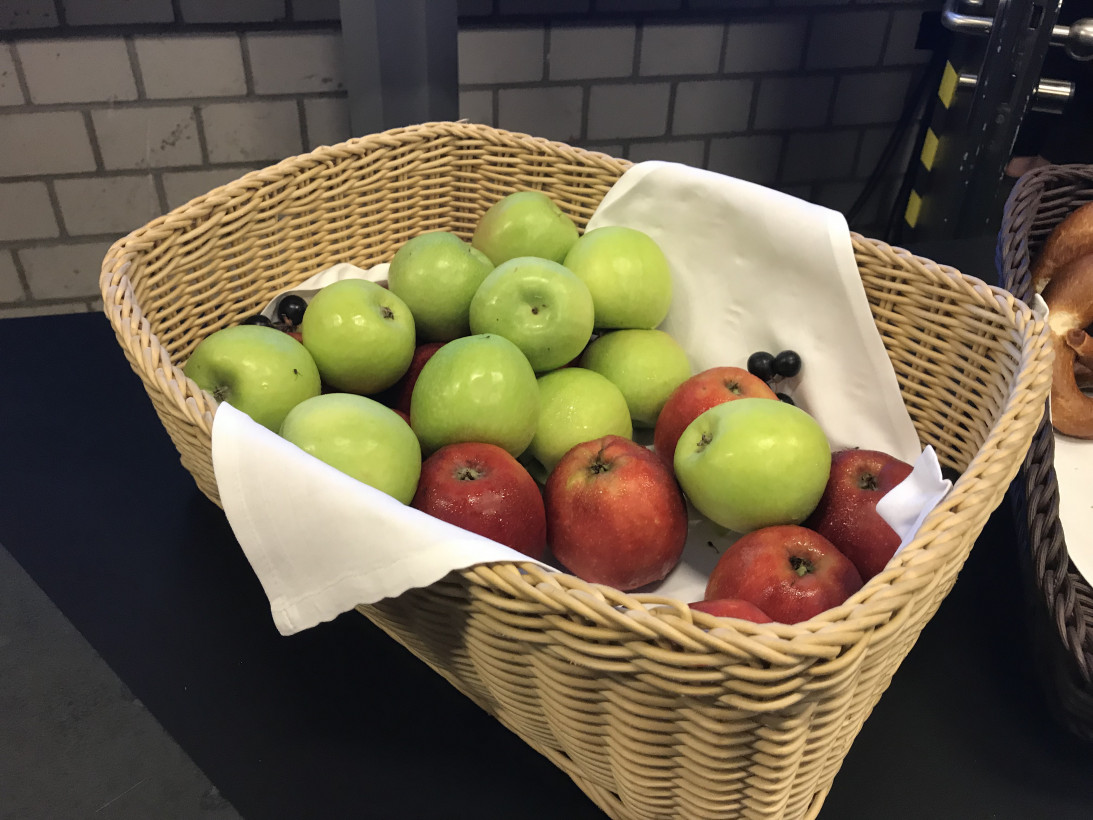 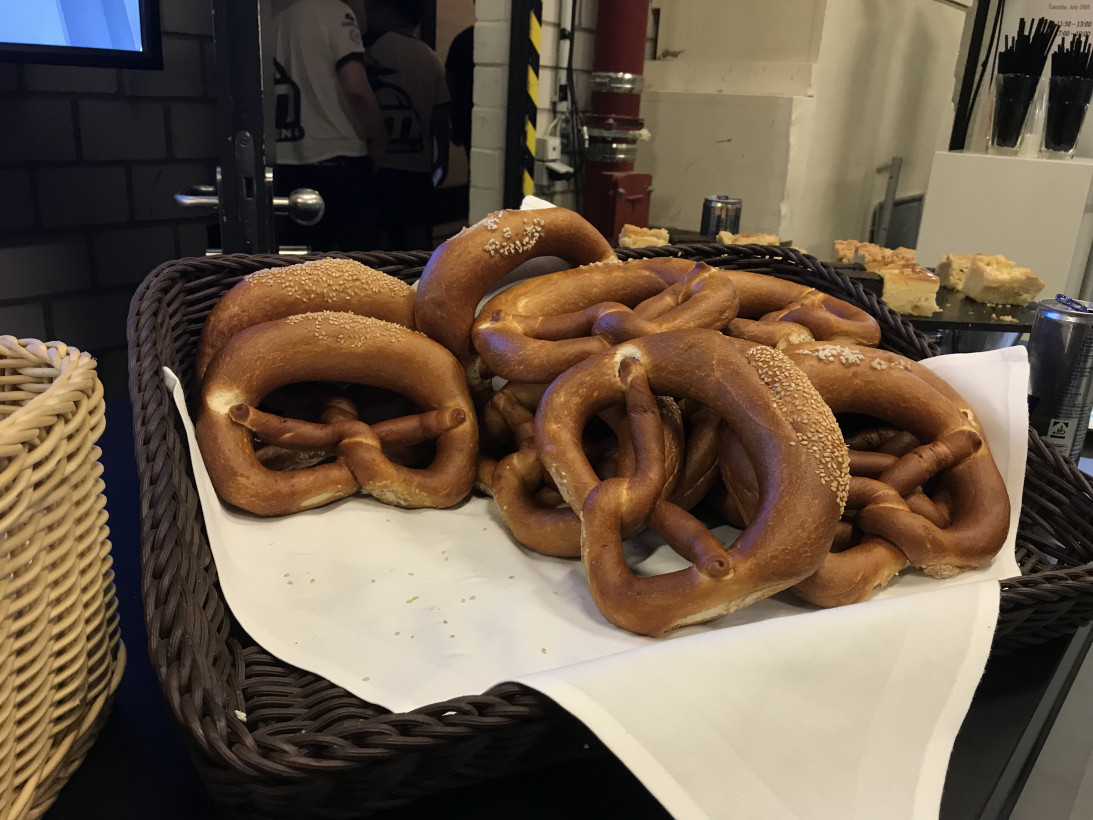 If you wanted something heartier yet, players can make themselves some instant ramen noodles. These came in a bunch of different flavors, and as I observed during my momentary invasion of the lounge, were fairly popular.

In addition to the snacks on offer, players could help themselves to beverages from a couple of well-stocked refrigerators. These contained the usual suspects: Coke, Sprite, and water.

Only one drink was PUBG-branded: still water. Bluehole, I really don’t want to tell you how to run your business, but you’re missing an amazing branding opportunity here lads.

The fridge also came stocked with Red Bull energy drinks, and cans of milky oolong tea, which is a popular beverage in East Asia. 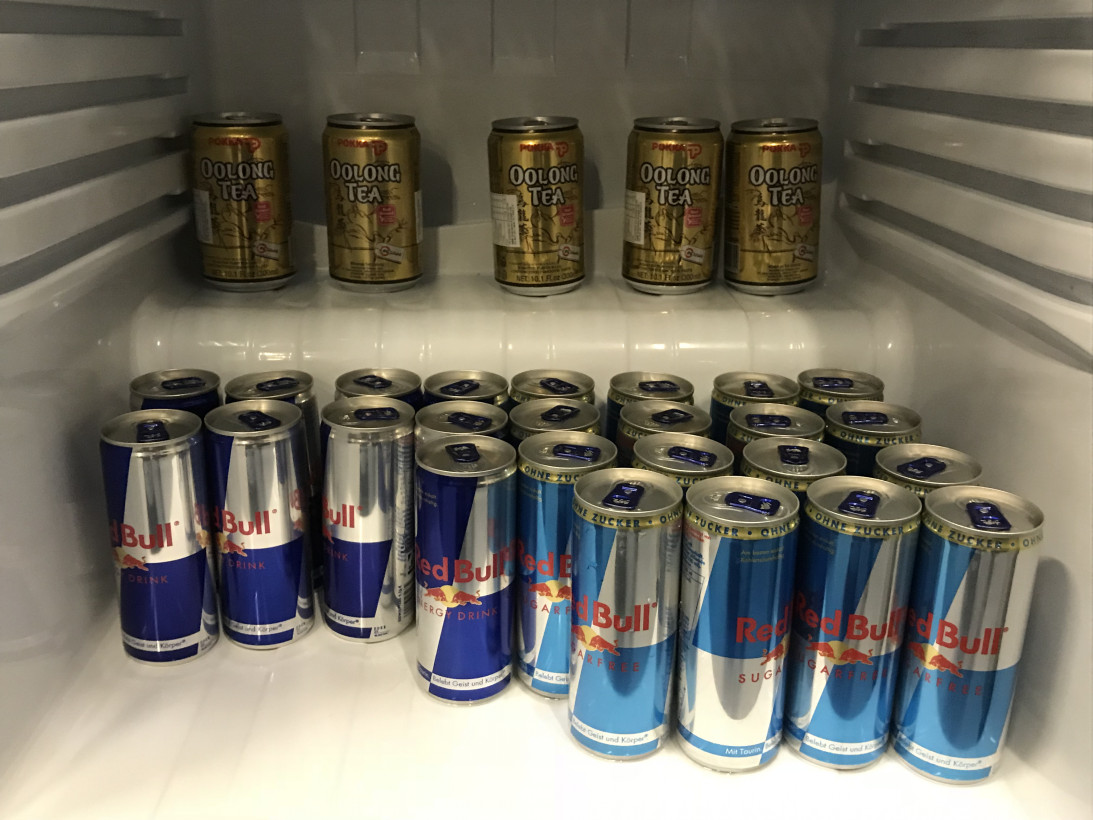 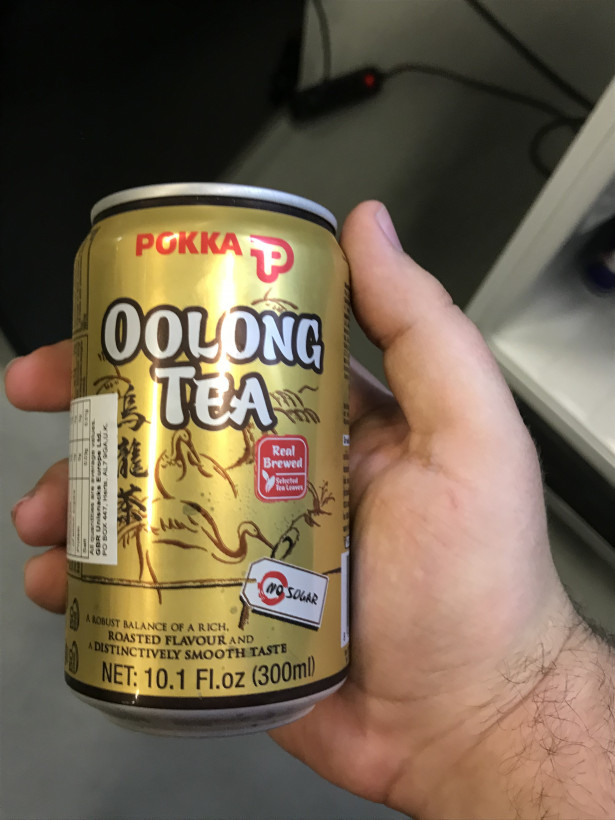 Despite the relatively low-key trappings of the player lounge, it’s worth remembering that everyone who has flown here to compete is a genuine, bona-fide sporting professional.

Everyone competing trains for hours every day, until their reflexes are honed and lightning-fast. They have merchandise, and adoring fans who chant their name, and applaud when they score a kill, and groan when they get knocked out. And with a $2,000,000 prize pool, the stakes couldn’t be higher.

If you’re not in Berlin, you can watch PUBG’s Global Invitational on Twitch here.