Venture capital firms stateside are off to a particularly slow start of the year.

According to data released by Thomson Reuters and the National Venture Capital Association (NVCA) this morning, 42 U.S. venture capital funds raised $4.9 billion in the first quarter of 2012, a significant 35 percent decrease in dollar commitments compared to Q1 2011, when 46 funds raised $7.6 billion.

Almost 75 percent of total fundraising in the first quarter of this year came from the top five funds, as the number of funds raising money during Q1 fell to its lowest level since the third quarter of 2009 (also see table below).

For your comparison: the third quarter of 2011 saw 65 funds raise money.

Leading the first quarter’s VC fundraising was Andreessen Horowitz, which raised $1.5 billion for its third fund, the Silicon Valley firm’s largest to date. 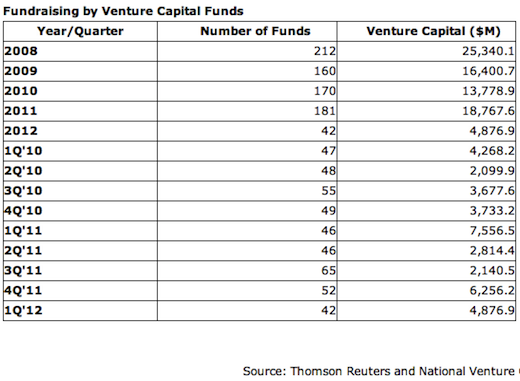