This week I applied to renew my UK passport, something that needs to be done every ten years. Besides making me think back to the past ten years of my life and forward to the next ten, it made me think more generally about how I consider myself – and that’s not really ‘British’ any more.

Having lived in the UK my whole life, I’m obviously a British citizen, but I don’t feel like one. I spend my entire day working alongside people based in places as diverse as San Francisco and Bangkok, and talking to people from all around the world via Skype, email and IM. My day doesn’t end at 6pm, I’m frequently answering emails from abroad into the small hours and when I do switch off from work I’m often thinking about the places I’d like to travel to around the world.

Sure, I live in the UK, pay UK taxes and use UK public services, but national borders are increasingly a hinderance to my life. Sometimes it’s artificial geographic boundaries holding me back (apps not available on my country’s app stores, albums not offered on Spotify here because they’re only physically available in the US, Netflix not carrying the same catalogue worldwide). Other times, it’s the fact that spending so much time online gives me an international outlook on things that makes national laws and local politics seem petty compared to the opportunities out there in the big wide world.

It got me thinking, can’t I renounce my British citizenship and become a global citizen?

National borders hold us back 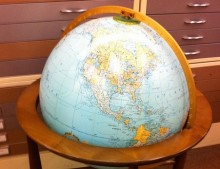 It sounds like a crazy idea, but I think it would be attractive to a growing number of people. You could physically base yourself anywhere that would have you, with easy right of passage between countries, just like you can drive through the European Union without ever showing a passport.

You could also reap all the benefits of having access to online content from right around the world without restrictions. You wouldn’t have to pay import duty on items you bought online from other countries, and as a global citizen you could roam the world paying the same rate for your Internet connection wherever you were.

Entrepreneurs wanting to set up businesses wouldn’t have to worry as much about their location as they do now. Factors like taxation and employment law can often impede the ambitions of businesses or force them to relocate to other countries. Global citizens setting up businesses that operate online could operate by different rules to the company next door that only operated on its home turf, in the physical world.

There’s more to life than limitless consumption and freedom of travel, of course, and while you wouldn’t be able to take advantage of, say, unemployment benefit payments or healthcare benefits in the country you were based in, there would be good deals on offer for these services from companies looking to build relationships with those whose horizons stretched beyond their own national borders.

I know what I’ve sketched out above is an idealistic vision of the world that simply can’t exist right now. We’re just not ready for it, and neither are our governments. However, fifty years from now, who knows?

Teenagers and young adults now can’t remember life before the Internet. When their own offspring of the future grow up and the entirely offline world is a distant memory, how frustrated will they be by the restrictions of national borders and local laws that jar with the freedoms of the Internet? And what will they do to change that?

Maybe being a citizen of the Internet won’t seem quite so crazy then.