This article was published on December 8, 2013

IK Multimedia has carved out a niche for itself over the past few years by selling low-cost, musician-friendly apps and hardware. The latest to hit the market is iLoud, a small Bluetooth speaker and audio interface designed for use with iOS and Android devices. I’ve been trying it for the past couple of weeks and I have to say I’m impressed.

First of all, let’s be clear that the name is an appropriate one. Packing 40 Watts, the iLoud went far louder than I expected of its 9.84″ x 6.3″ x 2.36″ dimensions. It’s got enough punch that you should be able to use it for busking in the street or rocking a small party.

The sound has a decent level of clarity for the speaker’s $299 price point, too. IK Multimedia is pitching this as a studio monitor-quality device and has published video comparisons with other popular speakers that give you an idea of the quality that it achieves. For optimum body to your sound, it works best placed up against a wall or piece of furniture, where bass is boosted through natural acoustics. 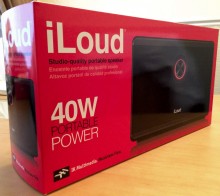 That said, even with it sitting on a coffee table, I listened to a variety of music through the iLoud, from bass-heavy electronica to flute-and-strings-laden Final Fantasy soundtracks without any frustration over muffled audio. Sure it’s no audiophile’s dream machine but it’s far better than you may be prepared for, based on its price.

The build quality is solid and its design is dominated by the large volume knob on the front. The knob is surrounded by a red light that indicates the power’s on but also flashes to indicate that the iLoud is in Bluetooth pairing mode.

Setting up the iLoud is as simple as pairing your iOS or Android device with it over Bluetooth and letting the music play. Although designed with mobile use in mind, it acts as a perfectly good portable speaker for your computer, too. Battery life is perfectly acceptable; I played nine hours of audio through it at a listenable but moderate level on a full charge, one hour less than the maximum ten IK Multimedia advertises for “normal usage.” I spared my neighbors a battery-life test at full volume, although the company claims “up to three hours” if you’re not quite so considerate. A full charge from flat takes about two hours.

While wireless audio playback is likely to be what most people will use the iLoud for, it’s actually a two-way device. A dynamic microphone or a guitar can be plugged into the quarter-inch jack socket and then relayed to your mobile device for recording or processing. To keep latency low, the iLoud doesn’t send audio to your device via Bluetooth. Instead, it comes with a cable that plugs into your headphone socket to act as an audio-in.

One thing to be mindful of is that the iLoud won’t act as a direct speaker for whatever you plug into the jack socket, it can only relay that audio to your mobile device. However, it works as advertised, and I was able to record audio from a microphone into GarageBand and IK Multimedia’s own iRig Recorder app on my iPhone. If I have one criticism here, it’s that the Gain control on the rear of the device is a little small and fiddly to use if you need to adjust the input level of your source.

There are plenty of cheaper portable Bluetooth speakers on the market, but iLoud’s quality, volume and musician-friendly interface impressed me, so if you’re in the market for a something that checks those boxes, it comes highly recommended.