As technology journalists, every day we are pitched new products, apps, and services designed to elevate our lives to 21st century ideals. “Smart” is often the common descriptor. But as complex as computers are, we had to wonder if algorithms truly enrich our lives – and if they do, what would happen if our future society depended on them to live?

To find out, I allowed apps to dictate my life for a day, even if it took me out of my usual comfort zone. “This is gonna be fun,” I thought. “I know where this is going.”

I’m not normally a breakfast-eating person, but for the purposes of this experiment I willfully risked burning down my kitchen just to give cooking apps a shot. That, and because Seamless said nothing in my area is delivering ramen (what I was really craving) at the moment. 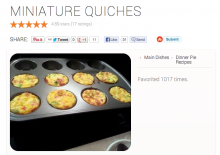 Using AllTheCooks, I told the app that the only ingredients I could work with were eggs, onions, tomatoes, and spinach. Any normal person would just tell you to whip up a classic omelet, but not AllTheCooks. After browsing the app for recipes that were tagged “Breakfast,” “Quick,” and “Easy,” I landed on “Miniature Quiches” – a recipe that would transform my boring omelette into fluffy, cup-sized iteration in under 20 minutes.

Furthermore, the recipe didn’t just call for my regular set of veggies – it recommended I used chili powder to flavor the eggs. Without consulting the app, I would have ended up with a mediocre but satisfying breakfast, but AllTheCooks helped change my morning up. It did cost me 35 minutes (the extra 15 was to figure out how my oven functions,) which I would ordinarily have just spent in bed, working.

Working remotely is both a blessing and a curse: There’s nothing more comforting than getting your productivity on in your jammies, but every so often you get cabin fever and it’s time to change the scenario.

With the help of Yelp and Foursquare, I entered my location and looked up “Internet Café” and “Free Wi-Fi.” For the record, I’m already aware of good coffee shops with reliable Wi-Fi in my neighborhood, but wanted to know where the apps thought I should go. Sure enough, it gave me recommendations for places I’ve already been, or others nearby that have decent reviews. I decided to relocate to a café I’ve heard of, but never visited.

Now that I know where I’m headed, it’s time to figure out what to wear. My personal rule of thumb when it comes to getting dressed: Unless you’re planning to meet someone that day, wear whatever makes you feel comfy. Usually that’s a pair of jeans and a thin sweater, which would be perfect for New York’s current fall weather.

But algorithms supposedly know better, so after a quick Google, I ended up on DailyDressMe.com – a website designed by a 16-year-old girl looking to help fashionistas worldwide find outfit inspirations according to the day’s weather. It was genius in theory, until the site told me to put on a turban.

Aside from being overly complex for a trip to a local café, it looked a little thick for today’s high of 75 degrees Fahrenheit. I hit refresh, hoping for a second look I could try to replicate. After the site told me to dress like this…

… I quickly grabbed my credit card and bought Three, a $2 weather app for iOS that does essentially the same thing as DDM without actual outfit recommendations. Instead, Three told me that for today’s cloudy weather, I should wear a light scarf, a cardigan, and jeans – exactly what I would have done without an app’s help (and $2 back in my pocket).

As I reached for my new favorite pullover, the DailyDressMe models stared back from my laptop screen. “But Natt, the point of this experiment was to follow algorithms for a day,” I imagined them whining. With that, my jeans went back into the drawer and I grabbed some black stockings, a white skirt, and a red top. Since I didn’t own a turban whatever-thing, I wrapped an infinity scarf around my head for effect.

I could feel the barista silently judging my faux-turban as I gave her my order for a latté and requested the Wi-Fi password. But despite the side eye, the café Yelp recommended was as good as the tips suggested: Quiet, good Wi-Fi, and delightful pastries to power me through the lunch hour.

As the day drew closer to 1:30 p.m., however, high school students began flooding the shop with incessant chats about Drake, Halloween costumes, and “Catfish: The TV Show.” I instantly plugged my earphones in and launched Spotify to tune out the noise.

Over the summer, I had compiled the perfect playlist titled, “The Best Songs of the Millennium.” These songs had been my go-to while I’m driving or working, but since today was about “smart” products, I hit the Discover tab for the first time since downloading the app and browsed what else was out there.

I don’t claim to have the greatest taste in music, but when “Andrew in Drag” by The Magnetic Fields is the first song to pop up, I knew the rest of the day would be okay, even if I looked like a hipster gypsy.

Fully intending to use my one-hour break to see what the Internet decides I should do, I hit up FindGravy, a local discovery app that helps you find things that are currently going on in your area. The app lets me select a mood (Brainy, Lively, Playtime, etc.) and sorts events by time and location.

The first thing that caught my eye was Oktoberfest at a nearby Bierhaus. Tempting, but I still needed to get back work after the hour so I’m afraid beer is no can do. Instead, this gem piqued my interest.

I packed my laptop and ditched the high schoolers on the immediate.

Upon realizing I needed to pay $25 to attend said gangster walk tour (it was sold out anyway,) I opted to use my break for something I actually could benefit from: Grocery shopping. I launched Shopkick to tell me where the nearest sales were, and noticed a coupon for a buck off a large thing of shampoo at Target. Perfect! Needed to replace my bottle at home anyway.

Once I got to Target, however, the app refused to cooperate. The poor scanning technology nearly crashed my HTC One, and I decided that saving a dollar was not worth standing in front of this Middle Eastern family in my culturally insensitive head wrap for a minute longer. It was time to go.

My boyfriend and I were supposed to belatedly celebrate my birthday, but it had been such a busy week that neither of us were able to make reservations ahead of time. On my walk home, I pulled up OpenTable to see what was available according to the neighborhoods we both can get to at a reasonable hour. Thankfully, OpenTable offered a variety of restaurants with several reservation times. Specifying “$$” (mid-price) and “Italian” dropped the list down from 225 restaurants to 20. I went with the one that had the best reviews on OpenTable, Yelp, and Foursquare.

By the time I arrived back to my apartment, I was covered in sweat. There was absolutely no reason to wear a jacket today whatsoever.

Not ready to give into DailyDressMe’s recommendation again, I decided to go with my gut instinct on what to wear for tonight’s date. But still, a girl could use a second opinion. I uploaded a shot of my two possible outfits onto Tiinkk, an app designed to help you crowdsource decisions. With a little over an hour to get ready, I gave the post the full 60 minutes for the random public’s help.

With another 30 minutes to go on Tiinkk, I prepared ahead of time where I was going to park while we were at dinner. ParkMe allows you to choose the desired location, when you’re looking to get in, and how long you need to be there. With this data, the app will show you the best parking spaces in the area, and how much it will cost for the duration.

Meanwhile, Tiinkk members are leaning towards the orange top outfit.

Before I could plan on a parking spot, my boyfriend calls to let me know he’s running late out of work and will be bringing food over to my place instead. Shrimp Fra Diavolo, we decided. Now that I won’t be driving, I’ll take full advantage of at least picking up a bottle of wine.

Unfortunately, this particular brand was not available at my local wine store, and the two Chiantis the shop had lacked descriptions on the HelloVino app. So I closed my eyes, picked one, and hoped for the best.

After being removed from apps and smart devices for a full two hours, this was the last true test of computer algorithms: What can I watch before bed tonight?

My heart said to put on this week’s new episode of “Top Chef: New Orleans,” but when I tried to cheat the system by entering “cooking” in Jinni, a movie recommendation database, I got “Aqua Teen Hunger Force.” Meh. Searching “Funny” also led me to a bunch of cartoons, which I didn’t mind except I had seen most of them already.

Dissatisfied, I went for another theme entirely: “Nostalgia.” A little bit of browsing led me to “Waitress,” a movie my brother had recommended a long time ago that I never got to watch. Luckily, it was available on Netflix, otherwise I’d have to do a lot of back and forth until I found a movie that was both recommended and readily available for my viewing.

Thirty minutes into the film, I passed out on the couch.

Well, do apps know it all?

As smart as apps try to be, they are not designed to help you with every aspect of your life. Google Now and Siri would argue otherwise, but if you must rely on algorithms to elevate or ease your day, you should use them in moderation. Besides, consulting an app for every decision you have to make in a day gets absolutely overwhelming.

As this experiment has proven, apps don’t know it all. The weather changes, traffic fluctuates, fashion isn’t one-size-fits-all. What they are good for is narrowing life’s overabundance of options down to a select few according to your personal constraints. The more data you give apps, the better they will try to be for you. However, these fancy little icons are just backup plans to complement your life, not lead it.

Apps are great for explorations if that’s what you crave, but at the end of the day, nothing beats your own instinct to know what’s best for you. When we rely on algorithms, we discredit the fact that our personal computer – the human brain – is just as “smart.” It might not function as quickly, but it’s that nature of innate discovery that’s much more exciting than anything your smartphone screen could ever recommend.

This post is brought to you in association with The Mobileys: honoring entrepreneurs who inspire and make a difference through mobile innovation.