We’ve been covering Wanderfly since its first beta test in 2010, when it set out to be the digital version of spinning a globe and throwing out your finger to pick your next destination. Since then, the site has grown and matured, adding new partners in February 2011, inspiring over 4 million travelers from 217 countries and even teaming up with the New York Times in late 2011.

Previously, the site prominently featured specs and details like hotel prices, airfares, things to do and the weather. Now, with a fresh redesign that showcases user-generated local recommendations and a Pinterest-esque, visual layout, Wanderfly has turned itself into the ultimate guide for tourists and locals alike.

The heart of the site hasn’t changed, you can still browse ideal travel destinations based on duration, price, etc, but now it is emerging as one of the most impressive discovery tools for cities all over the globe.

The redesign was in beta for quite a while, where travel blogger gurus and brands like the History Channel built up the content. And now that the site is available to the public, the response has been outright incredible. 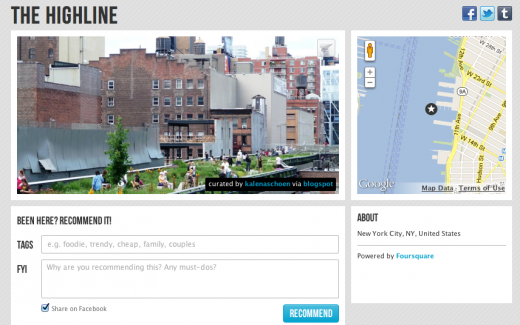 So far, in just 7 days, users have submitted travel recommendations in 322 cities, meaning that Wanderfly now has content in 522 cities in total.  Compare this to traditional travel guides like Fodor’s, which has guides in 300 cities over its entire history. At this pace, the site could easily become the fastest growing and most extensive social travel guide ever, with phenomenal content submitted by locals.

As for the site’s user-base, the average visitor spends 20 minutes on the site, and one third of them have returned within the past few days. On average, users have each made 3 recommendations and saved 4 recommendations. There have also been 17,000 open-ended searches for destinations, which means that 17,000 times visitors have said “here’s what I like/who I am, what do you have for me?” And since Wanderfly collects at least 3-5 data points every time someone does this, the site already has close to 85,000 points of data on travel intent (from just this one area alone). Mind you, this is all over the course of one week. 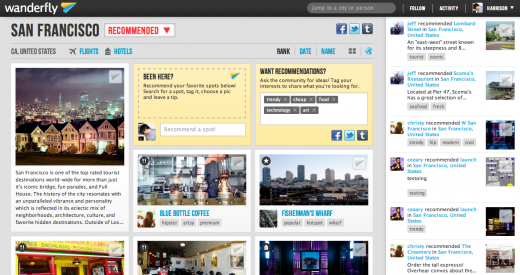 Clearly, maintaining this pace will be no easy task, but as content continues to be built out, Wanderfly has the potential to build on this traction and take the platform to a whole new level. Now, with these tools in the hands of its users, we’ll have to wait and see how the community molds the site as it continues to push forward.