Author and investor Tim Ferriss took some time off from his four hour workweek to give the first keynote on day three at TNW Conference 2010.

Using the Air Force Blog Assessment tool that the US Air Force uses to determine how they’ll respond to negative blog posts, Ferriss says that he usually either ignores junk criticism or “pours gasoline” on blog posts that he finds are somewhat useful, but that he’d like to see expanded.

On his own blog, Ferriss is okay if people attack him, but he has a zero-tolerance policy for users that attack other users. He feels that he doesn’t have a responsibility to publish negativity, and often deletes comments.

After the publication of The Four-Hour Workweek, Ferriss said that all of the mainstream press that he received was overwhelming and that he was naive because he didn’t research all of the reporters that he interviewed with. He says that he now requires all interviews to be recorded on his end, which he feels gives him some added insurance against attack pieces. 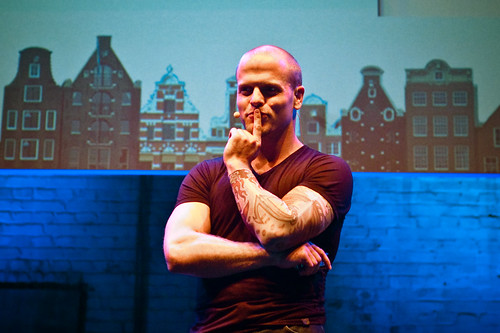 “The Cross-Media Trinity: Avoid, Acknowledge and Act” is what Ferriss has termed about how he filters news media and haters. He says to avoid traffic/media manic-depressives, that acknowledgement is usually more powerful than apology, and don’t be reactive otherwise you won’t control your life. 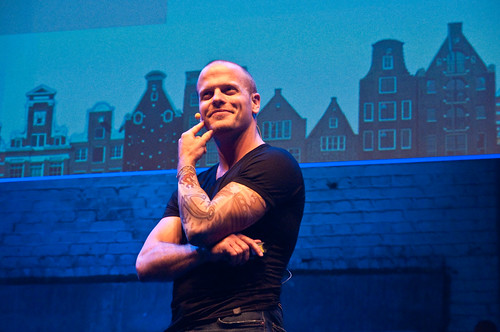 Tim Ferriss is a start-up angel investor (Twitter, Posterous, RescueTime, and others), blogger, and entrepreneur. He’s the Author is The Four-Hour Workweek, which had been sold into 35 languages and reached #1 on The New York Times, BusinessWeek, and The Wall Street Journal bestseller lists.

We met Tim at a Greek island (at Greek Blogger Camp) a few years ago and had agreed to get him to Amsterdam if we had a nice opportunity. This year we decided to honor our agreement and invite him as a speaker. We’re very glad we did!