After Sao Paulo and Rio de Janeiro, the next edition of Startup Farm will take place in Belo Horizonte in January, its organizers have recently announced. If you have read our piece about the city, you won’t be surprised, as its local startup scene is increasingly attracting attention.

So what is Startup Farm? It’s an intensive four-week incubation program aimed at helping its participants create startups in a short timeframe; one way to think of it is as a one-month Startup Weekend (see our post about Startup Weekend Rio).

However, this isn’t only about doing; there’s also a lot of learning going on, especially during the first two weeks of the program, which is very much structured. It all starts with a welcome weekend, during which the 50 participants form teams – usually around 15. The full group then meets four times a week for “content sessions” during the four following weeks.

Each of these weeks is focused on a different priority: Context & Concept in Week 1, Product & Client in Week 2, Business Modeling in Week 3, and finally Pitch in Week 4. Pitch is indeed a very important component of the program, which culminates in its Demo Day, which give the teams a chance to present their project to mentors and investors.

Interestingly, Startup Farm doesn’t take equity in the projects it incubates. Instead, it opted for charging participants a fee – R$2,500 per person (US$1,345) for its edition in Belo Horizonte. Its call for applications closes on January 5th.

While this is a non-negligible amount of money, a certain number of its students will also be able to participate for free thanks to grants from partners such as Samba Tech and Peixe Urbano, as well as from the program itself, which is supported by Microsoft and Endeavor Brasil.

One of the main reasons why wannabe entrepreneurs are willing to pay to join Startup Farm is the quality of its mentors. During four weeks, the teams get a chance to work from a co-working space where they get the support of entrepreneurs and investors from entities such as 21212, Arpex Capital, Gavea Angels and Initial Capital, among others. 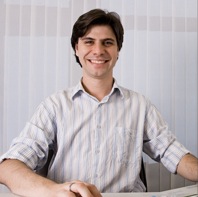 Startup Farm’s creator Felipe Matos is an entrepreneur himself, and a precocious one: he launched its first startup ten years ago, when he was only 16. His company was Latin America’s first WAP portal, Girando WAP, which went to receive investment and be acquired by Takenet.

One year after the sale, in 2001, Felipe left Takenet to create Instituto Inovaçao (Innovation Institute), initially thought as an accelerator. Accelerators were still new in Brazil at that time, but he had noticed that incubation wasn’t enough for the local entrepreneurs, many of them first-timers. During this first phase, the Institute worked with five startups – IT companies, but also bio-tech ones.

However, it soon perceived that it needed more resources to scale, and hopefully accelerate 50 companies. This led the Institute to open a consultancy arm focused on open innovation, Inventta, which now has a staff of 55, working from its offices across Brazil and in Colombia.

Besides diversifying its activities, the Institute also answered a call for tender from the Institute Brazilian Development Bank (BNDES), which it won in 2006. As a winner, it has been in charge of managing the seed investment fund Criatec – Brazil’s largest one, with a capital of R$100m (US$53.8m).

This immediately changed the Institute’s scale, and it has invested in 36 companies on behalf of the fund over the last year, of which 80% are IT companies. Still, Felipe was frustrated to see that he had to pass on interesting tech startups due to the fund’s high ticket (its minimum investment is US$800,000).

In March 2011, he traveled to Silicon Valley and Boston to understand how things were done in the US, getting to know TechStars, 500 Startups, Plug and Play Tech Center and the Founder Institute. When he got back, he decided that the Innovation Institute Group would launch Startup Farm.

Startup Farm isn’t a copycat of foreign accelerators; since the vast majority of entrepreneurs in Brazil are working on their first startups, Felipe is convinced the need for education on entrepreneurship is higher than in countries where role models are abundant. Since Brazil is a huge country, he also determined that Startup Farm should be an itinerant program – after Belo Horizonte, its next stops will be Brasilia and Recife.

What four weeks can do

Education is only one part of the program. Its other pillars are helping startups get access to capital, since Felipe is convinced there’s a gap in early stage funding in Brazil, and contributing to the local ecosystem.

Getting access to capital isn’t only about introducing entrepreneurs to investors, Felipe explains; Startup Farm also hopes to convince mentors and other successful entrepreneurs to take a leap and become angels, as part of a group of super-angels it is working on.

All participants in the program are also progressively constituting a network; calling themselves “Farmers”, they have access to a discussion group where they can exchange ideas about their startups and find answers to their questions.

In this context, it’s not surprising that the program has more impact on its participants than you may think. Despite its short duration, it give their startups and ideas a huge boost – also by saving them time they would spend working in the wrong direction.

Says the team of Easy Taxi, which won Rio’s Startup Farm: “The program directly contributed to the maturation of our monetization plan, which was responsible for defining our business model.” If the name of Easy Taxi sounds familiar, it’s not an accident; launched during Rio’s Startup Weekend, it was also one of the finalists of IBM’s SmartCamp Challenge.

As for Felipe Matos, he now hopes that Startup Farm will soon breed success stories all across the country; in 2012, it will travel to 10 Brazilian cities – and Belo Horizonte is only the start.