They are often our first responders in a chaotic, messed up world. They are chemists, sociologists and therapists. They are mixologists, cocktologists or better known as–our bartenders.”
-Baratunde Thurston

Just like the slow food movement of the past decade made us aware of what we put into our bodies, bartenders across the United States are championing a “slow cocktail” movement to bring America back to pre-prohibition times when making cocktails was an art form. 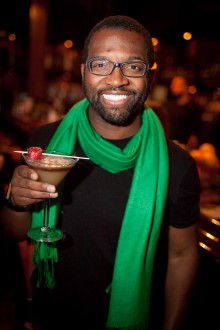 Author, comedian and whisky fan, Baratunde Thurston (pictured right) has recently finished up a nation-wide promotion called The Black Grouse Distinctive Bartender Tour, interviewing the most innovative bartenders in the industry, to find out not only what makes a great cocktail, but how technology and social media affect a profession where personal connections play a large role in achieving success.

As he traveled from New York to Chicago to Los Angeles and Miami, his knowledge of the industry and respect for the bartenders expanded along the way. “At home in New York, I’ve got my favorite bartenders but I never thought about what they do so deeply. When your with a professional, their craft is all they talk about,” he says.

One of the bartenders on the tour, Andres Aleman (pictured below), has been a bartender for 10 years, serving up cocktails in San Francisco, NYC, Miami Beach and now Tampa, Florida. He uses his Tumblr as a teaser to draw more traffic to his blog Shake and Strain, where he posts cocktail making how-to videos like “The Kiucubmer Cocktail.” He uses Twitter the way a DJ would, letting followers know which bar he’ll be at that night. He also creates incentives for his followers by offering them discounts if they retweet or share events he’s throwing.

“On a slow Monday night, I’ll encourage my followers to come into the bar and check-in on Foursquare in exchange for a 20% discount on their check. It’s worth it because if 20 people come in specifically for my event and put that status update out there, it’s amplifying the event potentially hundreds of times over.”

“For a bar manager, you’re not just hiring Aleman’s talent but you’re hiring actual sales. In this case, a large social media following changes the calculus on both sides of that relationship,” explains Thurston.

Perhaps what’s even more valuable for the cocktail revolution is the fact that social media allows bartenders to meet one another across different time zones and nations. “This cultivates a community of mixology, which accelerates the learning process and encourages experimentation. It’s very similar to the iterative process that we see happening with software developers,” explains Thurston. “They’re asking each other ‘what do u think of this and how do you tweak this?’ In this shared learning environment, they can get better more quickly.”

Social media can also help bartenders share not just recipes but the news that’s vital to their industry. For example, in Mexico there’s a movement to copyright the word “Agave”, which could have a massive effect on tequila production; word of it spread fast throughout the bartender community on Twitter.

“We’re all networked. If I’m in a new city, I think I could find a friend of a friend in 10 minutes just using Twitter,” says Jason Bran, a bartender at the Roger Room in LA.

Aleman echoes this sentiment: “Social media has helped fuel this great movement of cocktail culture. It’s allowed me to travel to other cities and have the work laid out before I show up.”

Bran (pictured above), who participated in The Black Grouse tour in LA, uses Twitter, Facebook and his blog to establish himself as an expert in the industry not just to other bartenders but to consumers as well. “I don’t think consumers look to one person or a group of people as experts in this industry, so I’m trying to change that,” he says. Recently, Bran’s blog landed him a job writing for The Hooch Life, a popular lifestyle blog that focuses on drinking.

But marketing one’s self can only go so far. “When bartenders call themselves ‘liquid alchemists’ or ‘bar chefs’ it makes me want to cry,” says Bran. “There’s all these buzz-worthy, grandiose titles but I feel like bartenders shouldn’t be trying to make a name for themselves just for the sake of being a celebrity.”

And sometimes technology can only go so far. “There are a lot of cocktail apps out there but when people come in, pointing to their iPhones and say, ‘Make me this cocktail’, they’re not really reaping the benefit of the bartender,” says Bran.

“As it stands right now there’s a real disconnect between people who create and consume great cocktails. The ideals are a little bit funky on the consumer side. People give a lot of thought of what they eat but not what they drink. That’s my crusade. Getting people to stop and think about why and what they drink,” says Bran. On the web, Bran recommends Liquorious for cocktail ideas because it’s very visual and Eater for food, as well as newsletters like London’s Class Magazine and LA’s Sporting Life.

Coming back to the whole idea of this cocktail movement: “Essentially we used to have a big cocktail culture,” says Thurston. “But then we had prohibition and things just got bad for drinking. The good bartenders left the country; they went to London and Paris and the nation forgot how to make drinks….Now, these guys are bringing the craft back, along with quality and authenticity, a theme we are seeing social media helping in numerous industries today.” 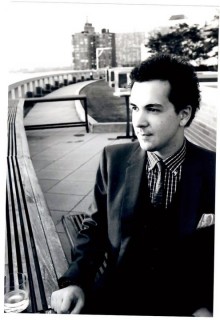 In New York City, bartender Brian Quinn (pictured right) has a few tricks up his sleeve to teach the world about cocktail culture. In addition to his personal blog Alchemists of Spirits, he publishes cocktail recipes on Food Republic, a men’s lifestyle blog and uses Pinterest to post photos and recipes of his cocktails. He also plans to start submitting cocktail recipes to local food recipe startup Gojee.

Quinn recently started teaching a class with SideTour titled Capture the Charm of Prohibition Cocktails with a Master Bartender, which helps consumers to build a repertoire for their own home bar. The class sold-out in February and he has his 2nd class happening in mid-March.

Quinn has been using social media platforms to discuss not just drinks, recipes and techniques but also trends he sees in the cocktail world. “It all comes down to education, and social media is a great tool to create even better offline experiences…but at the same time, we’re trying to avoid the cocktail version of the wine snob.”

In short, as bartenders learn new ways to market themselves online, they’re increasing awareness of their craft as well as connecting with other professionals, all of which is heralding the 2nd Golden Age of Cocktails. 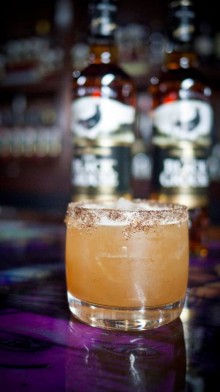 “Do you think we’re entering a new golden age of cocktails?” I asked a bartender in New York City last night as he lit a lemon rind on fire and let the oil drip into my Conquistador cocktail.

“And do you think it’s in large part due to social media and the digital engagement of bartenders online?”

“Uhm, maybe?” he said, garnishing my cocktail glass with something leafy. “I also think it’s because once you’ve had a good cocktail, why would you ever want to drink shit like a Red Bull vodka again?”