Despite technology’s pervasive tendencies, farming and disruption were, until recently, completely unrelated concepts. Though popular in certain, well-informed circles, community supported agriculture was hardly competition for corporate farms, which are empowered by their ability to distribute quickly, widely and cheaply, much to the dismay of those familiar with the consequential low quality of their produce.

Fortunately, technological advancement also means greater technological access, placing the necessary tools for communication in the hands of even the most dated markets. Recently, this came to include the agricultural industry, to drastic gains in both developed nations like the US, where Farmigo is connecting local farms to consumers, and developing nations like Kenya, where iCow and M-Farm are connecting local farmers with one another to compete with mass producers.

At the core of these brands’ ideologies are lofty but realistic dreams – most notably, the alleviation of poverty. As smaller farms encroach upon market share, consumers will be provided access to higher quality products, while those who provide those products will have access to previously out-of-reach capital. The key to their success is shared resources – a demand increasingly enabled by web and mobile platforms.

M-Farm is a Kenya-based startup that uses SMS technology for a triplicate of need-based causes: enabling farmers to inquire about the current market and regional prices of specific crops, aggregating orders of farm supplies to lower overall purchase costs, and allowing farmers to sell collectively while better connected to the market. Co-founded by Jamila Abass and Susan Eve Oguya, the startup was inspired by a constant cry for help from Kenyan farmers, who, said Abass, were complaining “on a daily-basis about lack of transparency in the market, having middlemen as their only channel of selling their produce, as well as high costs of farm inputs.” The founders’ goal, with that in mind, was to circumvent existing power structures to better distribute resources.

Their mission ultimately came to fruition out of IPO48, a 48-hour boot camp. After leaving with the grand prize of €10,000, they developed the SMS-based system that formed the foundation of their product. Because Kenyan farmers still function with limited access to technology more commonplace in developed nations, M-Farm’s strength is that it only requires users to send a text message to the number 3535, which then connects them to whatever resource they need. “The use of technology in the agricultural sector is still a young and not-so-mature concept,” Abass explains. “Most small scale farmers are still below the poverty line because they lack the information necessary to empower them.”

By circumventing this shortcoming, the technological gap between small- and large-scale farmers is alleviated; the market is transformed to include conglomerate-like partnerships of farmers whose progress was previously subject to untrustworthy middlemen. “With this, groups have been created, relationships among farmers have been established and enhanced,” Abass said. “Traditionally, groups fell apart due to a lack of transparency and group leaders who do not pay the farmers once work is done.” Beyond access to market prices, which provides transparency and leverage in negotiations, M-Farm provides automated aggregation to farmers in nearby geographical areas, so buyers only see the aggregated produce, its prices, and when and where to pick it up. On the other end of the scale, farmers can group their orders for farm supplies, keeping their own costs low.

Though M-Farm has already proven its capability to double profits, according to the 73 farmers involved in the pilot program, an added lasting effect will be strengthening the relationship between farmers and technology. “Farmers are becoming more responsive to technology and no longer see it as a tool for the urban middle class people only,” Abass said. “Many youngsters want to farm but they do not want to do the dirty work. They would love to manage their farm from the comfort of their offices. And technology will provide that by allowing them to follow their farms’ activities, including the daily motions of their farm staff.”

Whether coated in lush greens or eerily barren, African farms often share one significant characteristic – disconnectedness, both physically and technologically. iCow, another Kenya-based startup, is an SMS-based platform that seeks empowerment through education. Founded by agriculturalist and entrepreneur Su Kahumbu, iCow allows farmers to input information about their livestock and receive information and instructions on a range of highly-valuable issues: feeding practices, input on vital gestation days, disease control, calf illnesses, and milk record keeping, among others. On top of that, it connects them to nearby veterinarians, who can provide in-person value to the information iCow provides.

On a greater scale, iCow is focused on physically connecting farmers to one another and to the market, and has, so far, mapped 80% of Kenya. An often overlooked opportunity in the agricultural industry is the ability to move not just produce, but livestock in its own right, which iCow enables by allowing farmers to post public notices. Like M-Farm, it also allows them to aggregate sales on low value products, like goat’s milk, and then move collectively to the market. With the region sparse and farms widely distributed, the ability to connect on three levels – with veterinarians, other farms, and the market – means products are both better maintained and better distributed, elevating the market entirely. iCow’s crowdmap, constantly updated, adds a layer of visibility to those trying to navigate between distant farms, alleviating the strain in times of disaster. The strength of the platform has attracted significant, unexpected participants – the government and farm investors, meaning a single farmer can notify the authorities of an outbreak, and those authorities can inform all other farmers. 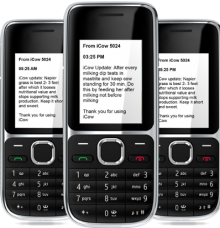 Ultimately, iCow shares one particular mission with M-Farm – attracting youth farmers. While M-Farm is hoping technology in itself will attract a youthful orientation toward business, iCow aims to attract the younger set through mKulima, an agricultural encyclopedia accessed by way mobile phone. In developed nations, including the US, education is often geared toward the socio-economic benefits of community supported agriculture – the health hazards of mass production, the resulting economic inequality, and so on – while in developing nations, education can mean the difference between fare and famine.

“Technology will also transform the decisions made by consumers, traders, and most of all governments,” Abass explained. “Food distribution and control is a challenge for Kenyan government. A perfect example is what happened last year: in certain areas of northern Kenya, people were dying of hunger while in the central and rift valley, food was rotting. Technology can be used to fill the missing gap.”

Even in developed nations, including the US, the benefits of social media and group sharing have remained largely out of reach to small scale farmers. Like those in Kenya, they’re often short on funding and, more importantly, awareness, lacking the resources and time necessary to successfully engage with the online community. Farmigo, a California-based startup founded by Benzi Ronen and Yossi Pik, is focused on scaling local farming to enable its widespread distribution.

“After talking to over 100 farmers, I realized that the Internet could be used to increase the business sustainability of the farms by automating many of the logistics and administrative tasks associated with going directly to the consumer,” Ronen said. “With the advancement of social networking, we now have a platform to facilitate a direct and meaningful relationship between the grower and the consumer.”

Farmigo, unlike M-Farm, is wholeheartedly two-sided: for consumers, its an online market that allows for food subscriptions with local producers, who make weekly deliveries at specified drop-off locations; for farmers, it’s an online portal for managing the harvest, sale, and distribution of their products. Farmigo’s platform is rooted, above all else, in simplicity. Consumers start or join drop-up locations where specific producers make deliveries, then, depending on the policy of that producer, make selections from their catalogs. The payment they make, handled entirely online, is paid to the producer, while Farmigo pulls a small, 2% transaction fee. On the other end, Farmigo provides the technology to farmers to manage all aspects of their transaction including tracking and billing orders, delivery schedules and reports, and direct customer communication.

Farmigo’s ultimate intentions veer toward political, inspired by the community supported agriculture movement, an alternative socio-economic model that focuses on the distribution of local food products. “By enabling organic farms to sell direct and getting higher margins than selling wholesale, we shift the economics in favor of sustainable agriculture,” Ronen said. “Consumers like buying direct from harvest and from the grower and value the authenticity and stories of the farms. Farmigo’s role is to elevate the farm brands and give them a platform to build richer relationships direct with the consumer.”

Like farmers, consumers are often aware of movements but not aware of points of access; Farmigo is entering the public eye by way of mainstream technology, hence their two-sided approach. “Farmigo was inspired by the CSA model and the ability of Internet technology,” Ronen added. “We could not have started this company in the past since the cost of building sophisticated software systems would not have justified the effort, and social networking platforms were not yet mature.”

Software, Ronen explained, equips the movement, giving it the legs to move forward, but it doesn’t make its purpose evident to the general public. Technology has created “an economy of community,” which, when coupled with the Internet, can hasten the disruption of industries. “Our biggest challenge will be educating households across the United States regarding the benefits of buying direct. The good news is that from the ‘economy of community’ we have a lot of help to spread the word,” he said. “At the end of the day, Farmigo won’t convince anyone. We will just help provide the materials for your friend to share their story about how buying direct from the farm provides the freshest, healthiest food available.”