There is a story about Salavador Dali that I heard in art school which made a huge impression on me. The story goes that Salvador Dali was visiting the American ambassador one day and being shown some magic trick. Dali, unimpressed, claimed he could do better. He promised to turn a 1 dollar bill into a 1000 dollar bill. The ambassador took the challenge and produced a one dollar bill. Dali grabbed it, took a pencil from his jacket, put his autograph on the one dollar bill, and handed it back to the ambassador.

It was a trick, but it was real, and Dali just demonstrated how much his personal brand was worth. Dali was obsessed with money and fame which even got him the nickname Avida Dollars (meaning ‘Greedy for Dollars’).

I love this story for several reasons. First of all I like the idea of being able to print your own money. I guess every entrepreneur is looking for a way to get to such multipliers, and Dali certainly found his.

The other thing I like about it is the story. I have been told this all happened around 1974 and I have told the story numerous times since I first heard it. I like these kinds of artworks that consist of more than just physical things. The same things goes for companies; good companies aren’t just a product or a service. Great companies tell stories and give you a certain feeling. There is more to creating a successful company than just creating a successful product. In a way you are creating your own world, your own story and your own ecosystem in which everything is tied together. You tell a story of which your products are a part of.

Of course, as an entrepreneur you can also ask yourself how scalable Dali’s business was. Turning one dollar bill into a thousand dollar bill might have worked. But would it have kept working if Dali would have stopped painting and started signing one dollar bills all day? Guess not.

Either way, it is a nice story and I hope you will have a chance to tell it to other people too.

P.S. when I was researching this post I stumbled upon the original one dollar bill signed by Dali, I made an offer, and I managed to buy it. It arrived yesterday: 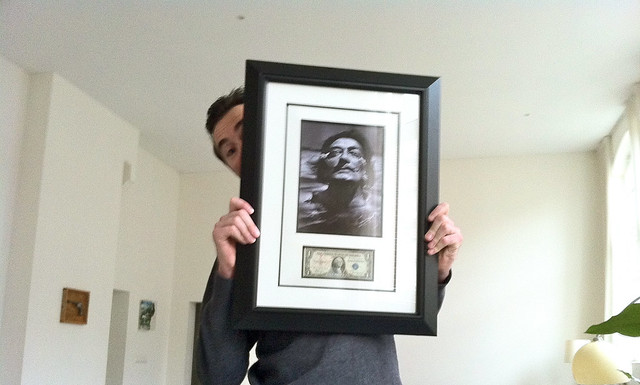