A whopping 87,7% of Latin American Internet users access social networks, well above the global average, according to comScore. As you can imagine, many of them play games on Facebook and Orkut. It’s not just about Farmville and its likes; local, independent apps are also available. Their main problem, according to the game developer Atommica? Acquiring users. This is why the company just launched Jampp, a cross promotion network for social games. Here’s what it’s all about.

Atommica isn’t the first startup created by the Argentine entrepreneurs Diego Meller and Martin Añazco. In 1999, they had already co-founded the online market research company Livra.com, which they sold to IPSOS in 2008. Following the sale, the pair definitely left Livra a few months ago to fully focus on their new venture, Atommica.

When they went on to create Atommica, Diego and Martin knew they wanted their new startup to focus on helping companies from the gaming sector. However, they soon realized that they first needed to understand these companies’ needs, ideally by being in their shoes. This is how Atommica started to develop its own social games, such as Home Fest, launched in partnership with Sony Music.

The company now has offices in London and Buenos Aires, with most of its developing team in the latter. As a game developer in Latin America, it experienced first-hand the sector’s main problem in the region. Indeed, according to Diego Meller, launching a game in the region is very complicated:

“The social gaming ecosystem in Latin America is very poorly developed. Even if you develop a quality game for the region, it’s difficult to get it out there without spending loads of money or giving away a huge chunk of your revenues,” Diego says.

This is how the idea for Jampp sparked in the pair’s mind.

Jampp is a network whose ambition is to help Latin American developers cross-promote social games and applications in Spanish and Portuguese. In practical terms, Jampp looks like a bar that game owners can easily install “by adding a few lines of code to their app.” The bar’s recommendations won’t be random as its algorithm will take into account the gamers’ profiles. Here is what it looks like: 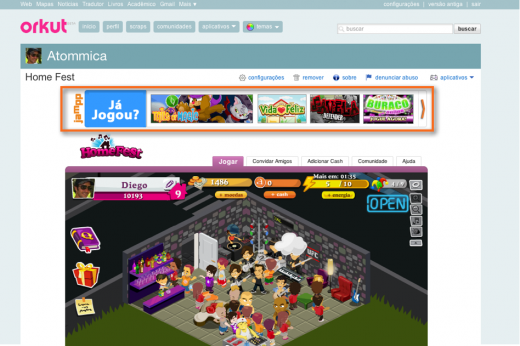 At the moment, the network works as an exchange platform: developers earn one credit when users click on the banner to find other games, and consume one credit when they get a new visitor through Jampp. The site launched its beta version a few days ago, and developers receive an initial credit of 500 ‘free visitors’ when signing up. However, credit monetization could soon become a source of revenue for the startup, which could sell credits on top of its exchange model once it reaches a critical mass of users.

The idea behind Jampp isn’t entirely new. Other app cross-promotion networks exist in other countries, such as Applifier. According to Ricardo Walter Hildebrand, what’s different about Jampp is its focus on Latin America. Ricardo is the Director of PalmSoft Tecnologia, a Brazilian game development company which makes games for Orkut and Facebook, such as Loja Feliz. His startup, which had already used other international banners, is one of the firsts that decided to add Jampp’s bar to its apps. So far, the experience has been quite positive, Ricardo said. He sees the network as a cheaper way to acquire new users while specifically targeting Spanish and Portuguese-speaking users.

Ricardo’s company is only one of the many dev houses that make games available to Facebook’s and Orkut’s millions users in Latin America (see our previous story about Orkut in Brazil.) We’re not only talking about Vostu and Mentez; according to Diego, if you put them altogether, independent gamers have almost as many users as the big players. However, their offer is very fragmented. Atommica’s ambition with Jampp is to help them join forces to create a better game ecosystem in the region. For now, its main priority will be to gain critical mass among Latin American users and game developers.

What do you think is the best way to promote a new social game? Let us know in the comments.