Do you have a hard time dealing with abstract concepts? Do you find it hard, for instance, to understand what’s at stake when talking about online identity? Well, this debate has become very concrete; it even has a name: “La Gringa“.Or better say, a pseudonym.

This is also the name that this American blogger was using to report crime in Honduras on Facebook – until the social network suspended her account a couple days ago under suspicions that she was “not using her real name.”

Pseudonyms can save lives

Why use a pseudonym, you may wonder. After all, we only have “one identity,” as Mark Zuckerberg said – or we should, according to his vision. Well, La Gringa‘s case is the perfect example of why people may have very good reasons to use pseudonyms. She’s based in Honduras, a Central American country ridden with violence and where homicide rates have doubled between 2005 and 2010, according to the UN.

Writing about violence is anything but easy. As La Gringa pointed out in a blog post criticizing Facebook’s decision, “Reporters without Borders (RWOB) ranks Honduras as 143rd of 178 countries in their 2010 Press Freedom Ranking.” It’s not just about job security; a controversial article may also have dramatic consequences on journalists’ and bloggers’ lives. As the UN recently reported, journalism is one of the most dangerous professions in the world, with more than 500 killings over the last ten years.

This is particularly true in Latin America, which another report recently singled out as “the world’s most dangerous region for journalists.” Although these reports mention journalists, this also applies to bloggers – not having a press card doesn’t mean they aren’t in danger. Social networks are also more and more under watch; in September, a Mexican editor was found decapitated after having reported drug violence online.

As you can imagine, these are good reasons for La Gringa’s choice to hide her real name when she’s reporting life in Honduras and local news, including crime, politics and drug trafficking, among other topics. 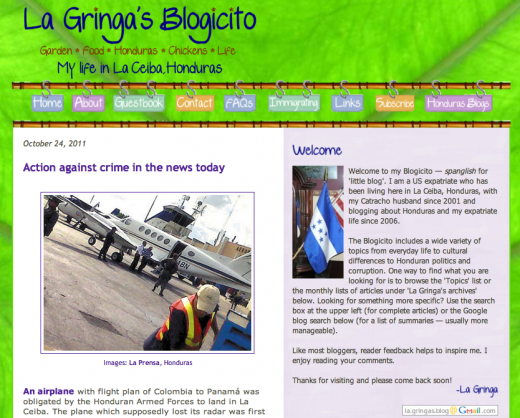 However, she also insists she wasn’t anonymous, as she has built a reputation under a pseudonym she has been using for several years. This is how her readers know her; several of them concurred below the online petition asking Facebook to reinstate her account: 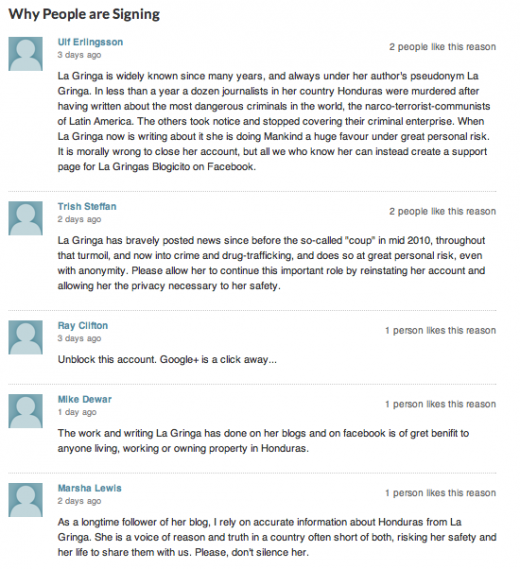 Although the petition calls for Mark Zuckerberg to intervene and reinstate La Gringa’s profile, this seems unlikely, as it would open a breach in the company’s “real name” policy.

Beyond the moral debate, this also raise questions around the way account suspension is handled. Crowdsourcing the process and leaving any user the opportunity to report a violation of Facebook’s terms of use made it very easy for anyone upset by La Gringa’s content to silent her.  The whole process is also very brusque. Instead of suspending her account until she provides a copy of her ID, Facebook could have suggested her to transform her profile in a fan page. It even has an app for that; as we reported in March, Facebook developed a migration tool for businesses willing to convert their profiles into pages.

Things being what they are, having her own page may indeed be the best option for La Gringa. Either that, or moving to Google + as the company recently announced that it would start tolerating pseudonyms. Take that, Facebook.

What do you think of pseudonyms and online identity?