What kind of services do U.S. companies outsource to Central America? If “call centers” is all you can think of,  you’re missing part of the picture – and an interesting one.

Indeed, the region has rapidly established itself as a destination for web design and development, thanks to local studios which work almost exclusively for foreign clients. So who are these companies and what is their relationship with the local startup ecosystem – or the lack thereof?

A look at the trend

The inspiration for this article came from the comments we received after our post on Central America and startups. While these readers acknowledged that there were very few consumer-oriented startups across the region, they encouraged us to look at the Central American web studios which have been mushrooming in several countries over the last years.

According to the Costa Rican entrepreneur Ricardo Arce, this trend is particularly strong in his home country. “In Costa Rica, there are quite a few companies with over 100 employees that are aimed at offering software development services to U.S. clients,” he explained, mentioning a few of them, such as Avantica, Isthmus or Outcoding. His own company, the nine-year-old web design and programming studio InterGraphic Designs, grew from 2 to 32 employees and 30% of its clients are North American.

What Central America has to offer: the Costa Rican example

One of Ricardo’s foreign clients is Nearshore Americas, a website on the very same phenomenon he’s part of. Indeed, “nearshoring” is the name given to offshoring to nearby destinations. For North American companies interested in outsourcing, Central America offers the best of both worlds: lower costs and geographic proximity. It also has talent; Costa Rica, for instance, has one of the highest literacy rates in the world (96%) and a pool of educated, English-speaking web designers.

Some of these professionals have gained experience working at the many large foreign companies that are based in the region. This is the case of the team behind Edify Software Consulting. Its seven partners, six Costa Ricans and one U.S. citizen, met while working for a U.S. company. Their startup now provides software engineering services for customers in the USA and Costa Rica, mostly based on open source technologies. Its website is in English, a sign of its global mindset.

According to Ricardo Arce, this talent pool has earned Costa Rica a good reputation among foreign companies interested in outsourcing. As a result, the web companies which specialized in attending foreign clients have been doing very well – so well that “they’re not competing for clients, they’re competing for talent,” Ricardo said in a video in Spanish about the Costa Rican ecosystem.

A few years ago, he explained, there were over 100 web studios in the country, most of them with a staff of three or four people. Many of these disappeared when U.S. companies like AvVenta and The Hangar started developing software from Costa Rica, hiring hundreds of employees and therefore luring talent from local ventures. As a consequence, “wages have increased considerably in the sector over the last five years,” he adds, not to mention the non-monetary perks companies have started to offer to attract and retain employees.

The market has also become more professional, asking more from web designers, programmers, marketers and UI experts, many of whom have nothing to envy to their foreign counterparts (see an example below, taken  from the independent web designer Julian Solano‘s portfolio.)

Beyond Costa Rica: a regional trend

Retaining employees can be difficult when many are tempted to emigrate. According to Ricardo, this is still the case in El Salvador, which suffers from a “brain drain” to the U.S. More generally, insecurity is a serious issue across the region and homicide rates have increased sharply over the last five years.

Yet, Costa Rica isn’t the only Central American country where web studios are present. In Panama, for instance, an initiative called Latamapps is aimed at connecting clients with tech providers in the region. In El Salvador itself, it’s worth mentioning Happy Punk Panda Studios, which creates digital campaigns for brands.

Nicaragua also boasts a few web studios, such as Güegüe, which has been offering development, design and hosting services since 1996, using open source technologies. In 2008, it also opened an IT Education Center, in partnership with the Danish company Xcompetence A/S. In 2001, another company called Webbasica followed Güegüe’s path and started offering web development, design, marketing and hosting services. Both are now well established in the local market. 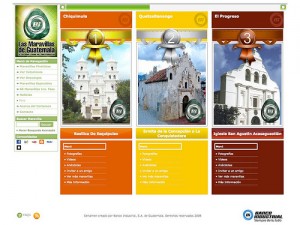 This trend is also quite strong in Guatemala. Web companies are quite varied, ranging from web solutions providers Shiftt and Solucionweb to the interactive digital marketing agency Milkn’Cookies and its cute designs.

As pointed out by our reader John Glasgow, it’s also worth noting that web design is only one of the main web activities companies can outsource. An American in Guatemala, he created a company called CEDS, whose product range includes online learning communities and language assessment tools. In other words, the next time you take an online test as part of a recruiting process, your English language skills could be evaluated in Guatemala – a good example of outsourcing and nearshoring.

An obstacle for startups…?

Still, working for clients is quite different from directly attending the local market. Could this trend be the culprit for the low number of startups coming from Central America? I asked this question to Ricardo Arce and here’s his answer:

“It’s not an obstacle per se. What happens is that this situation offers financial comfort – there are many developers and programmers in Costa Rica with good salaries. Which means that not many of them take the risk of giving up good conditions for the financial uncertainty of starting their own business.”

This is also true at the company’s level, he added:

… or an asset for the ecosystem?

However, saying it’s difficult doesn’t mean it’s impossible; Ricardo’s company itself recently launched what it describes as “its first effort of this kind: 11most.com, a startup where users can create  lists and rankings.”

InterGraphic Designs isn’t the only company that is working on its own projects; so is Edify. According to its Business Analyst Diego Munguia, working on internal products is part of the company’s growth: it needs to diversify its market and rely less heavily on its clients. This led the company to dedicate a portion of its revenues to developing its own software products in different fields, education and sports.

Looking from this perspective, exporting web services could actually be an asset for Central America to develop its own startups. Besides generating revenues, it also contributed to professionalizing the industry. Networking events have been recently created, where tech user groups gather to discuss the products they’re working with. Combined with the emergence of business incubators and dedicated subsidies, it could contribute to creating a fertile ground for a growing number of Central American startups.

Do you think outsourcing is a good thing for the local startup ecosystems?