The Epic Games store now has a new feature that’s been long-awaited by fans: wishlists. Now, you can keep a list of games you’d like to purchase and track when they go on sale — for such a simple feature, you’d be surprised how used to it you’d get.

Gamers often complain that one of the downsides of shopping on the Epic Games Store is that it doesn’t have quite as many useful features as rival Steam. Wishlists are one of Steam’s most useful features. Epic also added in a statement, “In future iterations, we plan to add email notifications when your wishlisted titles are discounted, or change status (such as a launch, or becoming available for pre-purchase),” so it’ll become even more helpful in future.

So how do you use the new feature within the Epic Games launcher? It’s simple.

Read: How to get a refund for a played game from GOG

First, make sure your launcher is updated. Second, find some games you want to buy. It shouldn’t be too difficult, as the Epic Store’s expanded inventory — while perhaps not as gargantuan as Steam — now has several great indies and AAA titles. On the game’s store page, find the heart that’s now next to the “Buy Now” button. for games with more than one version available, you’ll have to click “See Editions” to find it.

Now that’ve you’ve added things to your wishlist, how can you see them? You’ll find the wishlist on your account drop-down menu within the launcher, under Coupons. When you’ve clicked on your wishlist, you’ll be shown all the games you’ve added. If any of the games are on sale, it’ll show in the game’s listing. 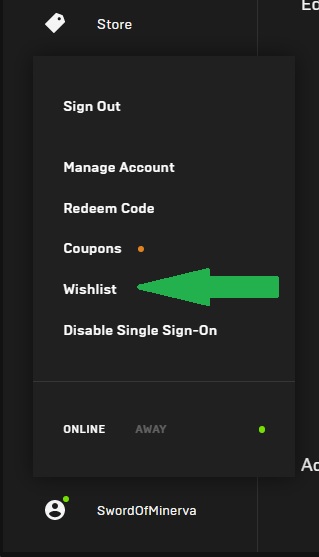 And there you go, now you can make wishlists with Epic Games. Good luck!