Honor’s betting big on Android phablets this year. The Huawei-owned brand launched its budget 5.5-inch 4X last week that we liked a lot, and I’ve been playing with the high-end 6 Plus (sound familiar?) over the past few days.

The Honor 6 Plus is again a 5.5-inch affair, with a slim bezel, metal accents and dual cameras on the back. It features Huawei’s own Kirin 925 octa-core processor with an integrated GPU, and packs oodles of power to take on some of the best phones available right now. But can it keep up with the competition? Let’s take a closer look.

For a plastic phone, the 6 Plus certainly feels solid. The front fascia looks fairly plain and most of it is taken up by the 5.5-inch screen. I was hoping that the lack of hardware buttons for home, back and menu would make for a smaller device, but it’s just about the same size as my OnePlus One.

On the right side, you’ll find a volume rocker, power button and two identical slots — one for your 4G Micro-SIM and the other for a MicroSD card or a nano-SIM that you can place sideways.

Honor says the glass fiber back is extremely durable and is stronger than military-grade helmets. That’s all well and good, but unfortunately it picks up consumer-grade fingerprints just like normal glass.

The 6 Plus weighs 165g — about the same as the OnePlus One and a little less than the 4X — which is par for the course at this size. It’s also not terribly slim at 7.5mm, but at least it’s easy to grip and use.

From the back, the 6 Plus looks sharp. The dual rear cameras, metal trim on both sides and minimalist speaker port are all well designed and nicely finished. Overall, it’s a handsome device, even if it’s not the flashiest of the lot released this year.

The 6 Plus features a 5.5-inch Full HD display, which works out to 401 PPI. That’s the same as the iPhone 6 Plus and the OnePlus One, and it looks really good whether you’re reading, gaming or watching videos.

The screen doesn’t get as bright as  the One, but it’s sharp, clear and works well enough in sunlight.

The speaker — located on the back near the bottom left corner — doesn’t get very loud. I’d complain some more, but these are phone speakers we’re talking about. Let’s leave it at that.

The 6 Plus supports dual-band 4G, and supposedly can handle two SIM cards as well. Besides the Micro SIM that goes in its own slot, the MicroSD slot can also accommodate a nano SIM placed sideways. For some reason, the Chinese import model that I received for review didn’t support the nano-SIM in the MicroSD card slot at all.

However, that slot does support high-capacity MicroSD cards and allows for up to 128GB more space. That’s over and above the 32GB of internal storage, of which you can use 25GB to stash your files and install apps. 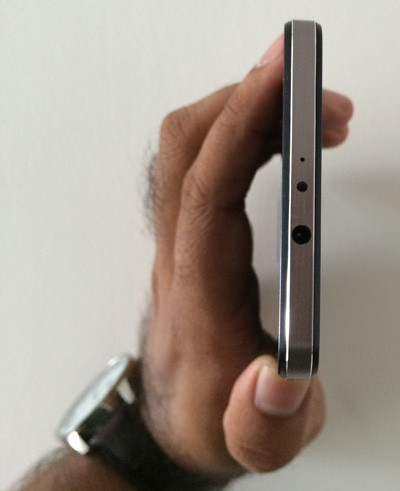 The phone also features an IR blaster so you can control your TV and home entertainment gear with on-screen remote control buttons. The app was quick to recognize my LG TV, but took a couple of tries to get the right codeset before I could flip channels as easily as with the bundled remote.

The 6 Plus also powers up its massive 3,600mAh battery fairly quickly thanks to the included Quick Charge 2.0 charger.

Given the price, I was hoping Honor would include a pair of earphones. Sadly, all you get is a SIM slot eject pin and a plastic card that just says ‘VIP’ and not a whole lot else.

Like the 4X, the 6 Plus runs Honor’s own Emotion 3.0 UI on Android KitKat. It adds some useful features like power saving modes and a Do Not Disturb mode to only allow calls from your favorite contacts.

There’s also a Suspend on-screen button that brings the home/menu/back buttons into a circular pop-up menu that you can place anywhere you like. You can also lock the screen and clear apps with a tap or two from the notification area.

I also liked the SMS app, which includes features like sending contact info as text and lets you call people with one tap from an incoming message pop-up.

In addition, Emotion UI supports themes that change your wallpaper and icons. There are a couple of live wallpapers with subtle effects in there, and live icons for the clock and calendar apps. The launcher doesn’t include an app drawer, so if you want a clean home screen, you’ll need to create a bunch of folders to house all your icons.

Overall, the ROM makes for a neat user experience that’s easy to set up for first-timers and seasoned Android fans alike. It certainly doesn’t get in the way of the 6 Plus’ performance — I was able to breeze through home screens and launch apps quickly throughout my testing.

Like its iOS-based namesake, the 6 Plus is all about the cameras. On the rear, it has dual 8-megapixel cameras which work in tandem to produce composite 13-megapixel images. How well do they work?

The 6 Plus is capable of shooting sharp photos with minimal in decent lighting. Colors are fairly accurate, details are crisp and the cameras do a good job of handling highlights and shadows.

The camera app is also really quick, so you don’t have to worry about missing a shot because of lag while launching or saving images.

The dual camera setup allows you to shoot in Wide Aperture mode, where you can set the aperture to get the amount of depth of field you want. Used correctly, it makes for some pleasing effects and lets you easily separate your background from your subject in the foreground.

While this feature lets you go as wide as 0.95, I’d recommend sticking with values north of 2.0, as anything less makes portions of images look like they’ve been blurred out manually.

You can also adjust the focus and aperture after shooting a picture in Wide Aperture mode. This is similar to the Lens Blur feature in Google’s Camera app, but is much easier and faster to work with and produces significantly better results.

The rear cameras perform well in low light too, though they would have benefited from the inclusion of optical image stabilization. They manage to reproduce colors accurately, but edges and details take a bit of a hit. Still, the 6 Plus is much better in such conditions than most other phone cameras out there.

The front camera is surprisingly good. There’s really no situation where you’ll need 8-megapixel selfies, but you could certainly use a clear image with sharp details, and the 6 Plus’ front shooter delivers with aplomb.

The 6 Plus is loaded with Huawei’s own Hisilicon Kirin 925 CPU, which includes an A15 1.8 GHz quad-core processor paired with an A7 1.3 GHz quad-core chip. So it’s effectively an octa-core processor, and it has an integrated Mali-T628 MP4 GPU to handle graphics.

Now that we’ve got all those letters and numbers out of the way, let’s talk sense. The 6 Plus is fairly quick and handles the latest resource-hungry games with ease. Modern Combat 5 and Real Racing 3 look spectacular, and the device doesn’t skip a frame when rendering large levels and tracks.

Social media apps, browsers, and videos run smoothly too. The only time I saw the device slow down was when I deliberately launched a slew of apps and games and left them all running. Even then, I only noticed the occasional hiccup, and managed to get things back to normal by closing a couple of apps.

Overall, the 6 Plus feels more nimble when launching apps and firing up the camera than my OnePlus One by a wee bit. The 3,600mAh battery holds up pretty well too, and I managed to get through a day and the next morning with it easily.

The Honor 6 Plus is a great phone with powerful cameras, good build quality and a decent user experience. However, at $425 (Rs. 26,499 in India), it’s nearly $75 more than the OnePlus One, and it doesn’t really add much to the equation for its higher asking price.

There aren’t a ton of phones that sit between the One and exorbitantly priced devices like the Samsung Galaxy S6 and the HTC One M9, and I feel like the Honor 6 Plus doesn’t quite earn its place there — certainly not with last year’s specs, quickly aging Android KitKat and no accessories to speak of.

That being said, the camera is really quite good and you’ll be able to store loads of photos, movies and music with a high-capacity memory card. The 6 Plus is available in black, white and a slightly more expensive gold version. If you’re looking for a solid shooter that can go for more than a day, this is a great buy.