This isn’t CityVille, folks. When making the decision between reporting on which Facebook games our readers should be checking out and which ones are the generic hoo-ha, I tend to ask myself the following question: Is this game innovative in a way that really changes how the social gaming space is being used?

The answer is yes. Dexter: Slice of Life (DSoL) is a social game on Facebook based on the hit Showtime series, Dexter, and is launching alongside the premiere of the show’s sixth season. If you like blood, serial killers and the twisted mindset of a lead character who makes you feel guilty when rooting for him, you will like Dexter.

I won’t get too much into the actual technical aspects of the game — for more on that, you can check out DSoL on Facebook and try it for yourself — but it’s worth noting that the series will be obviously be using its social game counterpart to promote the show. Just … Not in the way you’d typically expect. 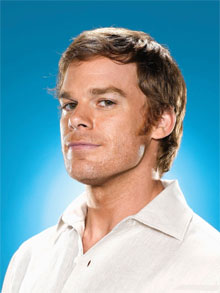 The distinction here is that DSoL will be updated every Monday morning following the show’s Sunday night airtime with new content to reflect the plot line of the previous night’s episode. Players will investigate crime scenes, collect items, and complete missions while using in-game energy to accomplish tasks. There’s a bit of stealth gaming involved as well, including the option to explore Dexter’s kill room just like in the TV series.

I’d assume the idea here is to better engage the show’s loyal audience by allowing players to simulate Dexter’s not-so-good-deeds. The updated content is also reportedly more in-depth, offering further insight into the world of Dexter beyond what viewers of the show might see on TV.

“Dexter: Slice of Life is monetized via a soft cash currency and a premium one represented by blood slides, a nod to the show. Virtual cash can be used to buy items in the game’s shop, while blood slides, purchased using Facebook Credits, are used for premium items, plus energy and stealth refills. Cash and slides can also be used to purchase deco for Dexter’s apartment complex home.”

How will this affect the show in the long-term?

It seems like a smart move. I’ve mentioned it before, but social media offers that unique opportunity for brands — and even shows like Dexter — to target quality leads and key players within their user base. By going social in this way and understanding which players are actively keeping up with the series and trying to interact with the show beyond what is offered on television, advertisers for the show can better understand who they are trying to market towards and what demographics these people belong to.

With almost everything becoming progressively more social, is it surprising that a show popular enough to reach its sixth season is making moves to integrate social networks into its marketing strategy? Probably not. Again, social ad revenue will be somewhere around $10 billion globally by 2013, and over 98% of US adults aged 18-24 are actively logging into some form of social media site at least once a month. So it’s only natural for entertainment television to evolve along with current digital demands in order to capitalize on emerging markets.

What do you think? We’ve seen fashion, world peace and music go social in big ways — what can possibly be next? Will the entire world be going social soon? Is this a good thing? Weigh in below.