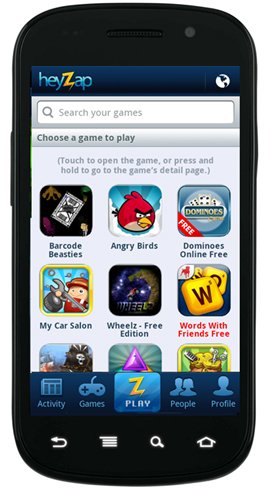 When I had the chance to look at Heyzap a few months ago, it quickly became my favorite way to play games on my Android device (and now it’s on iOS, too). By bringing all of your games into one place, providing a gamification of the games themselves and even acting as a launcher, Heyzap has been a great addition for many mobile gamers.

Now, to make things even better, Heyzap has revamped its Android app (iOS coming soon) to include a Play tab, where all of your game shortcuts will live.

“Heyzap’s “Play” tab takes your gaming history into account when organizing your games, making sure that the games you play the most are always easily accessible. For example, if you’ve recently played Zynga’s Words with Friends or Digital Chocolate’s Millionaire City, Heyzap will make sure that those games appear at the top of the Play tab the next time you open it.”

Of course you can still rate and post discussions, play the games that your friends are playing and leave tips for your friends. With over 600 games and “millions of downloads” on Android, Heyzap has found itself a hit in the free time market.

It’s available for download now, for free. If you’ve not given HeyZap a shot, perhaps it’s time.

Make sure to check out TNW Apps for the latest, the greatest…and the ones you’ll want to avoid.