M is still in beta and is not available for everyone yet but Jackson Fall, head of product at Wealthcoin, already has access so helped us take it for an early spin.

Taking it for a whirl

First, we tried the stupid stuff. Can it tell jokes? Yes it can.

What about doing something like sending a motivational message every morning? Also yes.

Sure enough, next morning at 9 AM on the dot, M sent Jackson a motivational message. It’ll be interesting to see if M remembers to send a message beyond a day or two.

Onto more serious things, Fall wondered if M could find a fun things do to on a date with a Tinder friend in San Francisco. A few minutes later, M came back with three recommendations of interesting events in the region. 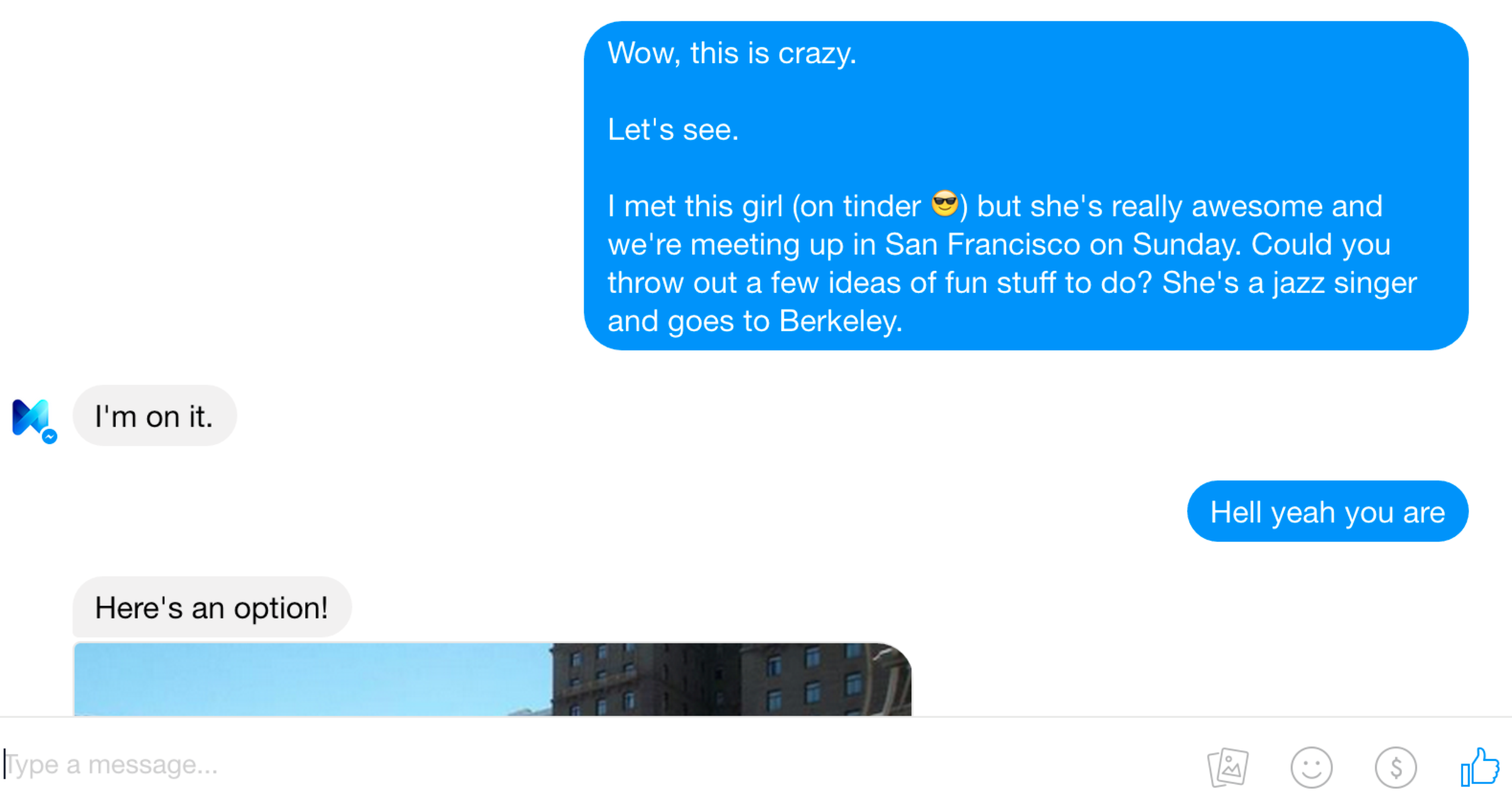 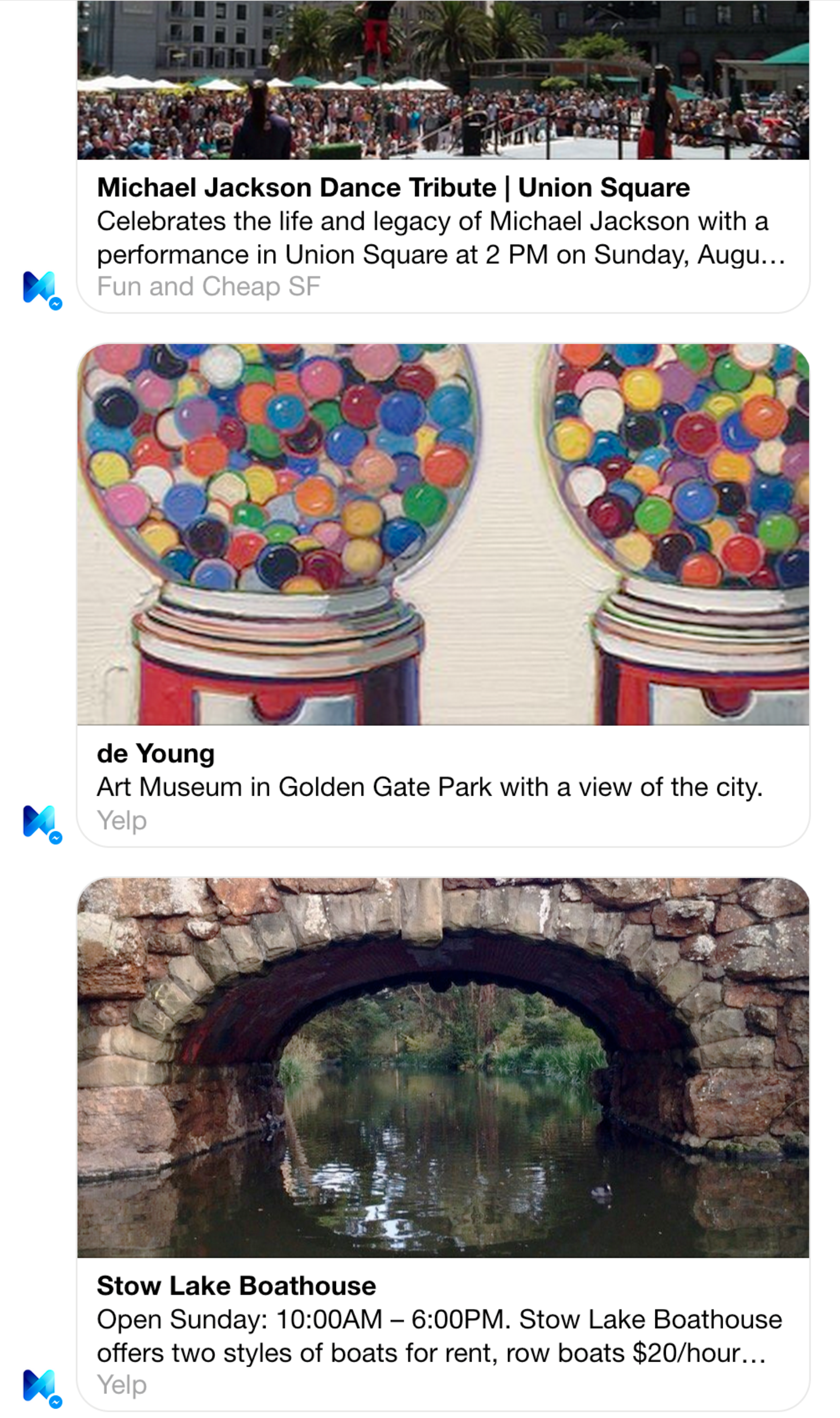 Asking for a recommendation of fast food that’s open late — which will probably be one of M’s most requested things as drunk people start asking it questions — works great too. M recommended burgers, in this case.

You can also ask for random information, like when the next train is coming and it’ll give you the answer along with a screenshot, which is amusingly taken from what appears to be Google Maps.

There are limits to the practical knowledge M provides, however. Asking it for coding advice with AngularJS stumped it, though it knew what the framework actually is.

It’s fast… most of the time

In general, M responds within a few seconds to simple requests and conversation, but can take up to 30 minutes to come back to harder questions.

If you throw it a real curveball, like “find me a workspace in New York and San Francisco” it can take much longer — Fall said it took about two hours to get a response to that question, with fairly disappointing results.

That’s when I started wondering what M can’t do. M says it can do almost anything unless it’s illegal — so we asked if it can order weed with the right documents, which it refused to do.

An AI with no opinion

Things get weird when you start asking M to have an opinion on things. Asking a question like “hey, find me a good song” results in M linking to Billboard’s hot 100 or YouTube’s popular page.

Before we stopped bothering M with endless, suspicious back-to-back requests, I wondered if it was possible to get an answer about whether it’s staffed by a bunch of humans or is really a robot replying.

Based on that answer, it’s been trained in the very same PR speak that Facebook gave after it announced the tool. If you ask M point blank whether it’s humans or robots typing, it gives the exact same answer, regardless of wording.

Facebook told WIRED that it’s mostly human contractors providing the results and “training” M, though it wouldn’t say whether or not those humans were actually typing out responses.

M looks like a promising and formidable competitor to Siri, Google Now, Cortana and other “assistants” built into smartphones, but it needs work to iron out the weird kinks.

M does far more practical tasks than Apple and Google’s tools, but doesn’t offer the intimate integration into your phone that those services do.

That probably doesn’t matter, though, because Siri’s useless at ordering you dinner and Google Now can’t really find your next date spot.

Facebook M is currently only available as part of a limited invite-only beta, in San Francisco.