“There are no recording devices allowed during the demo.”

While Microsoft was happy to show off what the finished HoloLens would look like during its Windows 10 event keynote, it was less inclined to let journalists take photos, shoot video or even record audio of the demos it was doling out in its headquarters.

But, if you wanted to see Microsoft’s take on the potential future of computing, and didn’t mind cramming all your gear into a gym locker, you complied. You could take notes on paper, but all your electronics had to be left behind. To be completely honest, I’m happy I traded access to my phone in return for a few minutes of virtual fun.

I mean, I’m not happy as a journalist to be barred from taking photos of a not-quite-ready device. The demo units Microsoft let the press try on were like more something you’d find in the garage of a mad scientist than the oversized Oakley blades from the 1980s HoloLens they showed onstage.

What I got to shove on my head was a work in progress with exposed internals and wires sprouting out. The device was tethered to a box and to a computer; the box hung around your neck and the tether flowed up into an arm mounted to the ceiling.

I felt like a cyborg. Part man, part corporate FOMO roadmap. The pictures would have been glorious. But, I wasn’t allowed to take photographs. In fact, the security theater around getting to the floor on which the HoloLens resided was a bit ridiculous with a security guard every 20 yards, a special badge and multiple false starts just to get into the rooms to see the headset.

“Holograms” on my face

But all was forgotten when I put HoloLens on my face and was treated to a trip to Mars, a Skype call to help me wire a light switch, and Minecraft. OMG Minecraft was so awesome.

First, let’s talk about Mars. During the event Microsoft showed scientists at JPL walking around in a virtual Mars landscape. I got to do that. I was placed into three different areas of the Red Planet next to the Mars Explorer where I could walk around. The images projected into my eyes felt like more than just a 2D representation of the landscape. If there was a space between a rock and the ground, I could kneel down and look into that crevice.

The scene becomes very real to you.  At one point, the gentleman who was leading me through the demo stepped back into the Mars Explorer, I started to react to keep him from knocking into the what I can only assume is a delicate (and expensive) piece of space equipment that wasn’t actually there.

The gaze and air-tap gesture interface was easy to pull off. Audio commands should make its use a bit less awkward.

They also showed me interacting with others in the alien world environment and how scientists can use the system to set waypoints for the rover to photograph and test with its laser (the rover has lasers). If I were a NASA scientist, this would be great. If I were a teacher, I’d demand my school offer this to all the students. You can explore another planet from your living room with this. This is an amazing teaching tool and we should all hang out on Mars this weekend. But more likely, the next demo will be how most people use HoloLens.

The Skype demo involved getting help from a friendly Microsoft handy man. Using Skype, he could see what I saw and helped me wire a light switch. If you’ve ever tried to explain to someone over the phone how to do something that’s completely foreign to them, like how to change a fuse in a car, this is much better solution.

In addition to seeing what I was seeing, he could draw in my field of view to show me exactly what needed to be attached together and which tool to use when I needed to test for a live wire. It’s a solid use case, if not a pretty boring one. 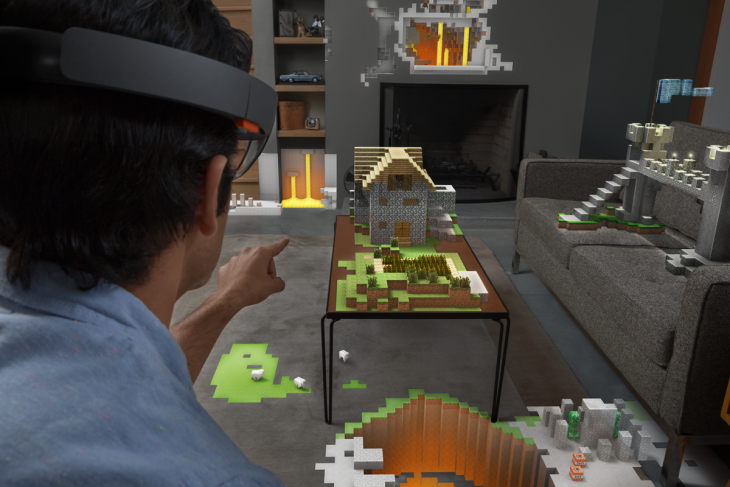 Then we played Minecraft. Well, they called it HoloBuild and were sure to tell us that it was a built to showcase the powers of HoloLens and that didn’t mean that they would actually release the app when HoloLens went on sale. Whenever that’s going to happen.

But come on. This kind of app is exactly what people will buy this headset for. The headset does a spatial mapping of a room and you can start building a Minecraft world inside your house. In addition to using, say a table to build a castle upon, you can burrow through the table and add elements into your virtual block-building world. They even had a demo where you used dynamite to blow a hole in a physical wall and could peer into a virtual room outside the real room you were in. You can expand the space to fit your Minecraft building needs.

If you’ve hung out with children in the last three years you know that Minecraft is their new religion. They will save all their birthday, chore and lawn mowing money to get this thing on their face and make their room their own personal Minecraft universe.

Of course, that’s if they can afford it

While the demos were amazing, the lack of actual information was less so. Like when will this thing be available for sale?

From the looks of the devices we used, Microsoft has a long way to go before these face computers are in the store. Don’t be surprised if 2016 emerges as a ship date. Also, how much will this face computer cost?

That’s the big issue here. Microsoft could make the world’s greatest headset, but if it’s too pricey, few people will buy it. VR/AR headsets may be the new hotness, but are they worth the money? Once you’ve walked around Mars a few times, the Red Planet will lose its allure. The Minecraft app is great, but I think most of us would rather use computers or mobile devices to chat over Skype.

The HoloLens will be a completely untethered computer when it ships complete with its own Wi-Fi and dedicated Holographic processor. It’s not going to be cheap to produce and the company will continue to be hassled about misusing the word hologram. But, if Microsoft can get it on the market for the same price as a tablet, it could give the company its first wearable hit and make that Minecraft acquisition even more fruitful.