Let’s talk cars. No, TNW isn’t on the verge of becoming an auto blog, but I’ve had the chance recently to drive some great ones and I thought that it’d be fun to put them head to head in a comparison of a few factors. Now since we’re a tech blog, I’m also going to focus on the tech features of my two most recent, a Mazda 3 and a Kia Rio.

When you look at these two cars, you’re talking about semi-sporty, fun to drive and economical vehicles. My Mazda demo was a 5-door, 6-speed manual transmission. The Kia was a 4-door sedan, with automatic transmission. Auto snobs will tell me that I can’t compare the two, but I think that there are a whole lot more similarities than differences.

It’s no secret that a few years ago Kia had some problems. While their engines would seemingly run forever, the cars themselves just weren’t high quality. That’s completely changed, as I noted in my review of the Kia Soul a couple of months ago.

Mazda is another story entirely. The Japanese brand has had exceptionally high marks for quality for decades. The same holds true today and the 3 is no different. Everything about the car felt solid, well-built and as it should.

Side by side both the 3 and the Rio fit together very well. The interior lines are clean, the materials used are appropriate to the price range (sub-$20k). The hatchback of the 3 offers amazing amounts of space, as does the trunk of the Rio. 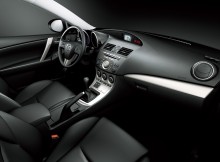 The 3 is a blast to drive. It’s quick, nimble and the 6-speed transmission begs you to sling it around corners. In truth the 3 feels much more like a sports car than a compact, but the smallish engine doesn’t do it any favors for acceleration. Also, because of that transmission, first gear is all but useless, requiring you to quickly shift into second on any sort of rapid acceleration. Sixth gear, however, is a highway-cruising dream. I regularly saw 44+ miles per gallon on the highway, and averaged a pinch under 40 in a mix of city and highway driving.

The Rio is a great car. Easily maneuverable with a softer-than-it-should-be ride and responsive steering. While it’s certainly no match to the 3 in the fun department, it’s a much more logical choice for any sort of 4-person road trip. Average MPG hovered in the 36 range, with spikes up to 40. My sole complaint is that the steering is almost too responsive, eliciting near-swerves from light touches. I’d actually like to see a bit more movement required to turn the car.

Visibility is king in the 3. There’s a lot of glass around the car, and the near-vertical rear glass gives you a panoramic view through the rear-view mirror. The windscreen is also large, adding to the “fishbowl” effect. In the Rio, visibility is good but doesn’t quite compare. My 7 and 9 year old kids commented numerous times on how much they liked riding in the 3 because of being able to see better.

Here’s where things get interesting, and it’s really the point at which a decision has to be made. Mazda is a Japanese brand with a long history of great cars. You’re going to pay for that reputation, as well as the established build quality. While the 3 wasn’t expensive, coming in at just a touch over $20,000, it also lacked some creature comforts that might be important to you.

What it did have was 16-inch aluminum wheels, that buttery-smooth 6-speed manual transmission, integrated Bluetooth, power windows and keyless entry. But that was pretty much the extent of the features. 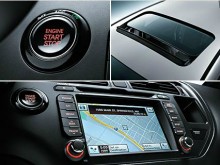 For roughly the same price, you could get the Kia Rio, in either the 5-door or sedan model. In doing so you’re giving up the years of assured quality, but you’re exchanging them for an incredible amount of electronics and gadgetry. The $2,500 Premium package gives you push-button starting, a rear-view camera, integrated navigation, Sirius satellite radio and of course the heated, leather seats and power sunroof. Oh, and adding that package, as well as every available option, still leaves the price of the Rio at a miserly $21,400.

The bottom line is that the Rio has many more geek toys at a cheaper price than the 3. But it doesn’t have nearly the same gear-slamming, pedal-pounding driving experience.

Which Should You Buy?

Honestly? I don’t know. While the features of the Rio are welcome in the price range, I can’t help but think that it didn’t feel as solid as the 3. However, when you get into the 3 it’s like strapping into an old fighter plane. You’re not surrounded by a modern cockpit, but it does have every tool that you need to get the job done.

In the end, either direction you choose here is solid. The Mazda is fun but sparse, the Kia is well-equipped but a bit less entertaining. Me? I’d gladly spend a week driving either of these two cars again, so here’s hoping the companies knock on my door sometime soon.