Microsoft announced two new Lumia smartphones this morning at Mobile World Congress – the Lumia 640 and 640 XL – both of which will be available worldwide from April. We got a chance to try out both models and see how they perform.

The Lumia 640 replaces the popular Lumia 630 and the Lumia 640 XL is the successor to the Lumia 1320. Both handsets come with a year’s license for the Office 365 suite which works on PC, Mac and Android tablets as well as on the phone. On top of that, you get 60 monthly minutes of international Skype calling and 1TB of storage on OneDrive.

The 640 is the smaller phone of the pair and is a lower end device. It has a 5-inch 1280×720 screen with Gorilla Glass 3 and runs a 1.2GHz Qualcomm 400 quad-core processor. At first glance, it is nice to see Microsoft didn’t skimp and put a weaker display on this low-end device. It has 1GB of RAM and 8GB of storage built in. This may sound like a low amount of storage for a new phone to the market, but priced under €200 ($223), it is on par with devices at this end of the scale.

Using the camera on previous Lumia devices was trying – it was generally slow to open and the auto-focus wasn’t up to par with other phones on the market. The cameras are better than I expected on this model – an 8-megapixel shooter with LED flash at the rear and a 1-megapixel front facing snapper with a wide angle lens. The 640 is definitely a winner for anyone who enjoys the occasional selfie or ten.

Microsoft has in fact brought its full camera software to this device, so you get a range of flash adjustments and the newly released rich capture mode to play with. The latter was introduced in a Lumia camera app update in January, and is an optional setting that calculates the best mode for your picture automatically. It also includes a slider that allows you to adjust the HDR, exposure and flash levels.

The camera might be the most impressive feature on this one, but it also notably sports a bigger battery than the 630 at 2,500mAh, which can only be a good thing.

Scaling back from the 6-inch display of its predecessor, the XL has a 5.7-inch display running at 1280 x 720 resolution. The features of the XL are for the most part the same as the 640, but Microsoft has gone further again with the camera on the phablet. It has a 13-megapixel shooter with LED flash and Carl Zeiss optics on the main camera. The front facing camera is an impressive 5-megapixels with a wide angle lens. It is certainly a competitive setup for a phone that is priced in the mid-range level of €189 for the 3G version and €219 for the LTE version. 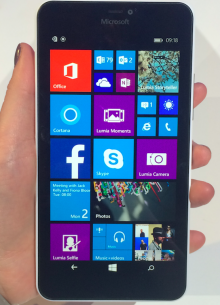 When I held the phone, I was surprised at how comfortable it felt in my hand for such a large device. The rounded edges and polycarbonate body make the phone soft and aesthetically pleasing. Microsoft claims that the XL’s 3,000mAh battery allows for 20 hours talk time and up to 39 days of standby time.

Overall, it feels like both phones have fallen a little flat. If you were hoping for a new Lumia flagship, then you will undoubtedly be disappointed with these new handsets. That being said, it is a smart move by Microsoft to introduce two new low- to mid-level phones with some higher specs than average, especially in the camera department.

That coupled with the free software bundle, Skype minutes and storage could certainly make both of these phones a popular choice and competitive on the shop floor when they are released next month. That is exactly what Microsoft needs – more people to buy the phones and make them more appealing to developers who can in turn make apps for the platform.