Samsung unveiled a wealth of new products at its Premier 2013 event in London including new tablets, an Android-powered camera and new laptop. It was also the first public outing for several members of its Galaxy S4 series devices and new laptops.

However, nestled among the new releases was the ATIV Q, one of the most interesting devices to be revealed at the show as it runs Windows 8 and Android side-by-side.

Key specs of the device include a 13.3-inch qHD+ display of 3,200 x 1,800 pixels (which certainly didn’t disappoint in the brightness or resolution stakes – it also comes with a stylus so using it at that resolution doesn’t become too fiddly), a microSD slot, a micro HDMI port, 4GB RAM and up to 256GB of storage, although it comes with a 128GB SSD as standard. Under the bonnet, there’s an Intel Core i5 processor to keep you ticking along.

Overall, it’s just under 14mm thick when closed flat and weighs just under 1.3 kilograms, making it a little bit heavier than Ultrabook category of laptops but still plenty portable enough.

However, clearly one of the headline features is the ability to run in either full Windows 8 mode or to use the Android Jelly Bean (4.2.2) OS that’s also on board.

Despite running both operating systems, the device feels much more like a Windows machine than a normal Android tablet – it also boots directly into Windows, meaning you need to actually make the decision to switch into the Android mode. 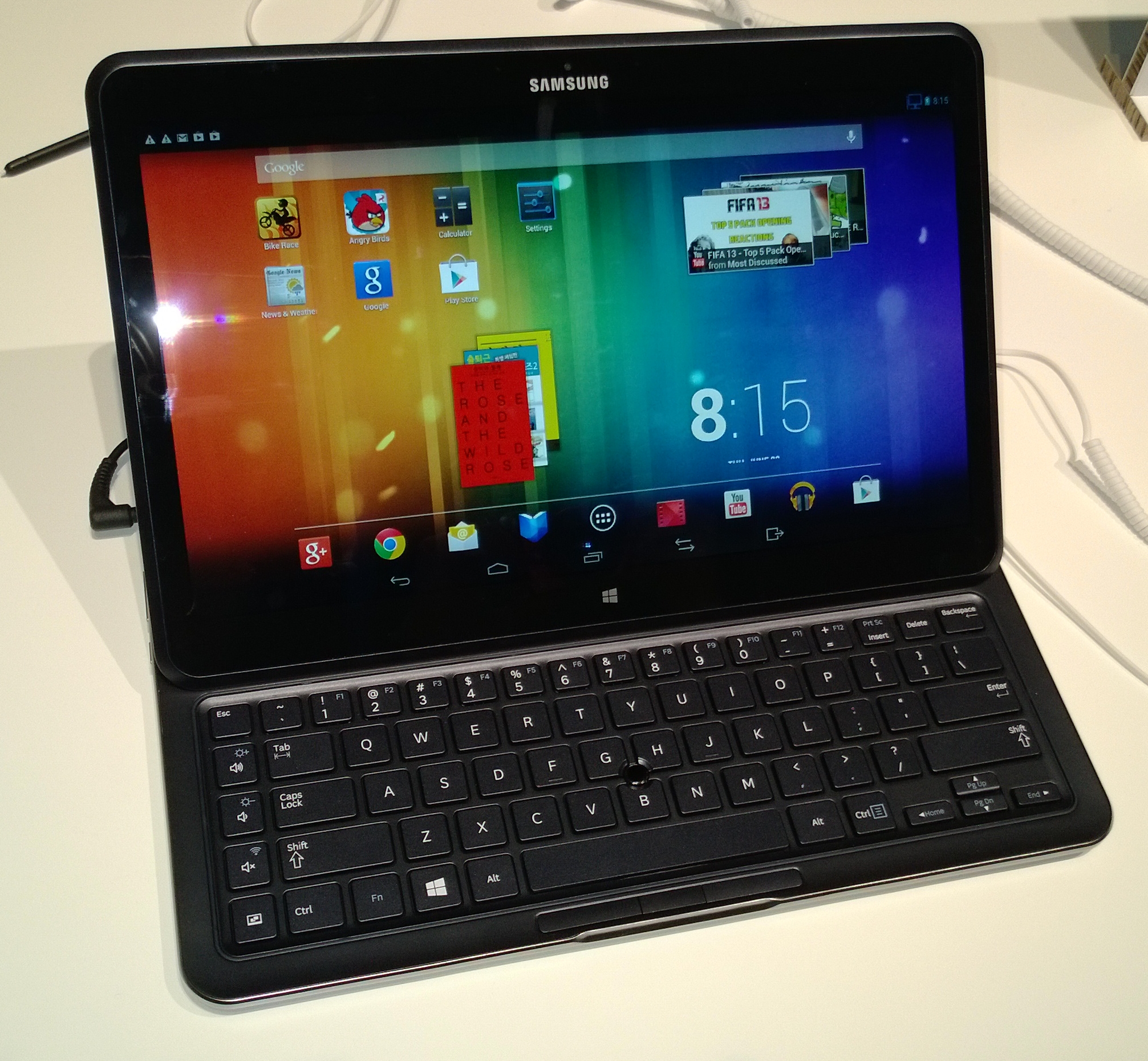 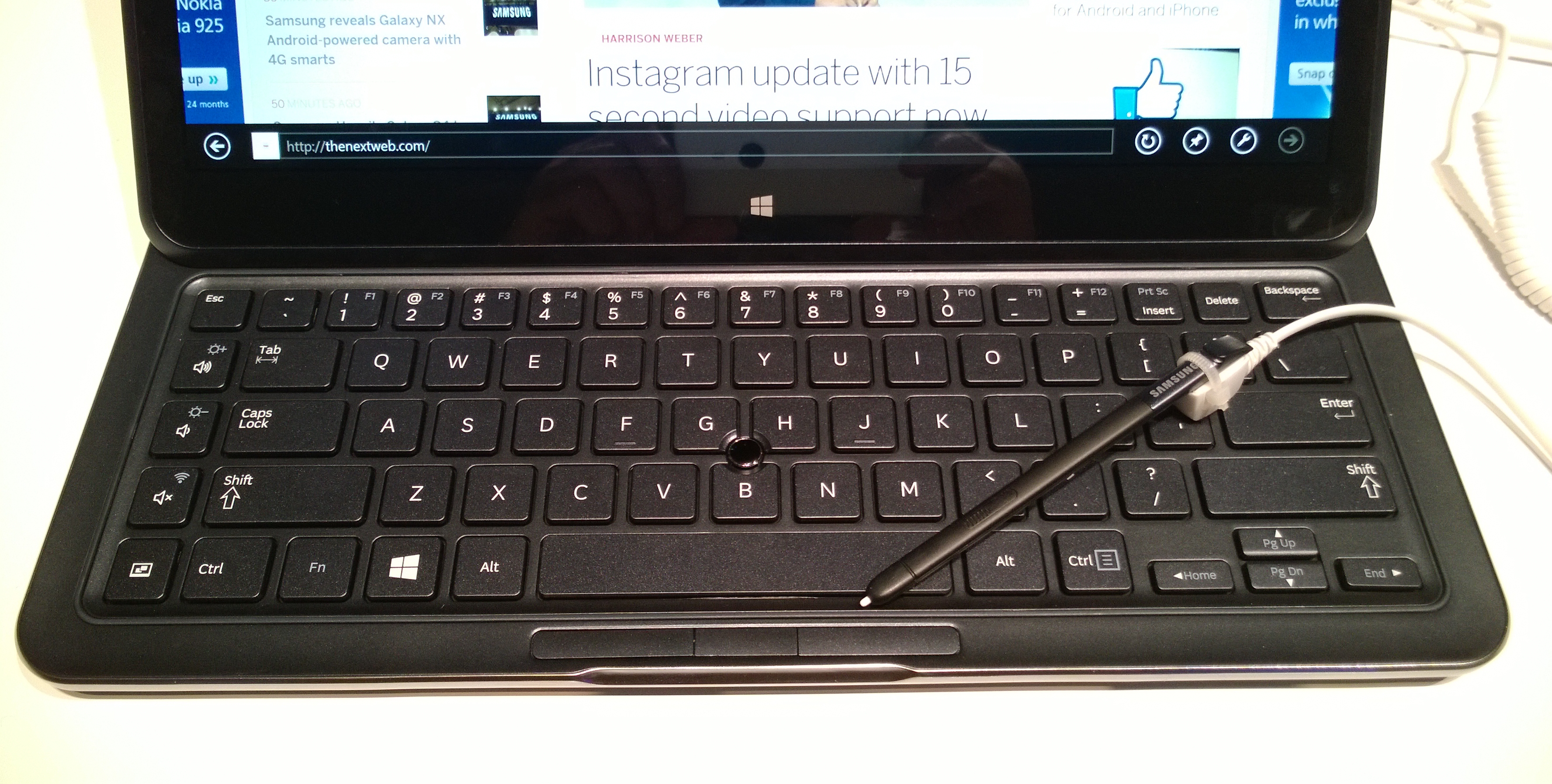 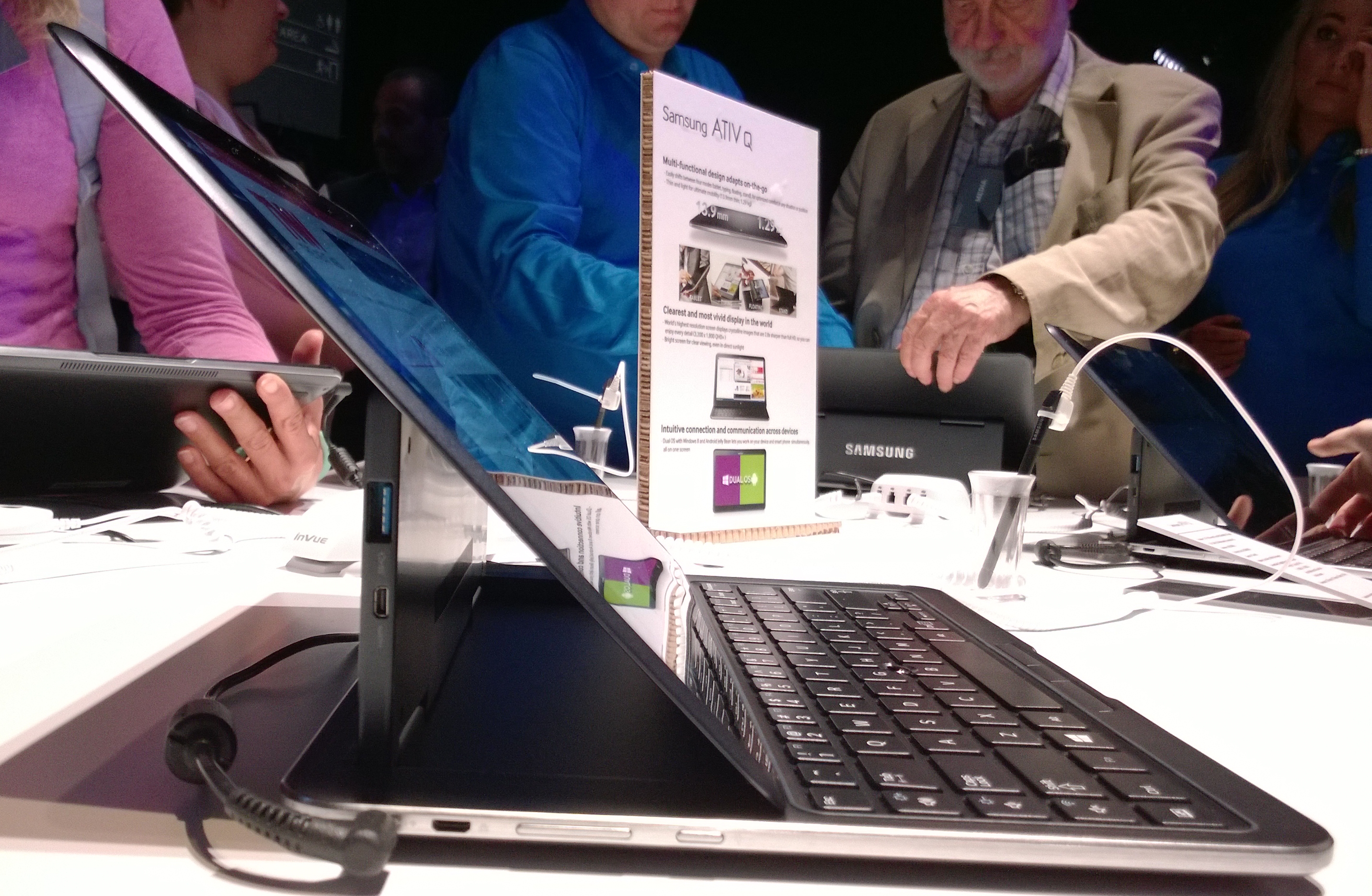 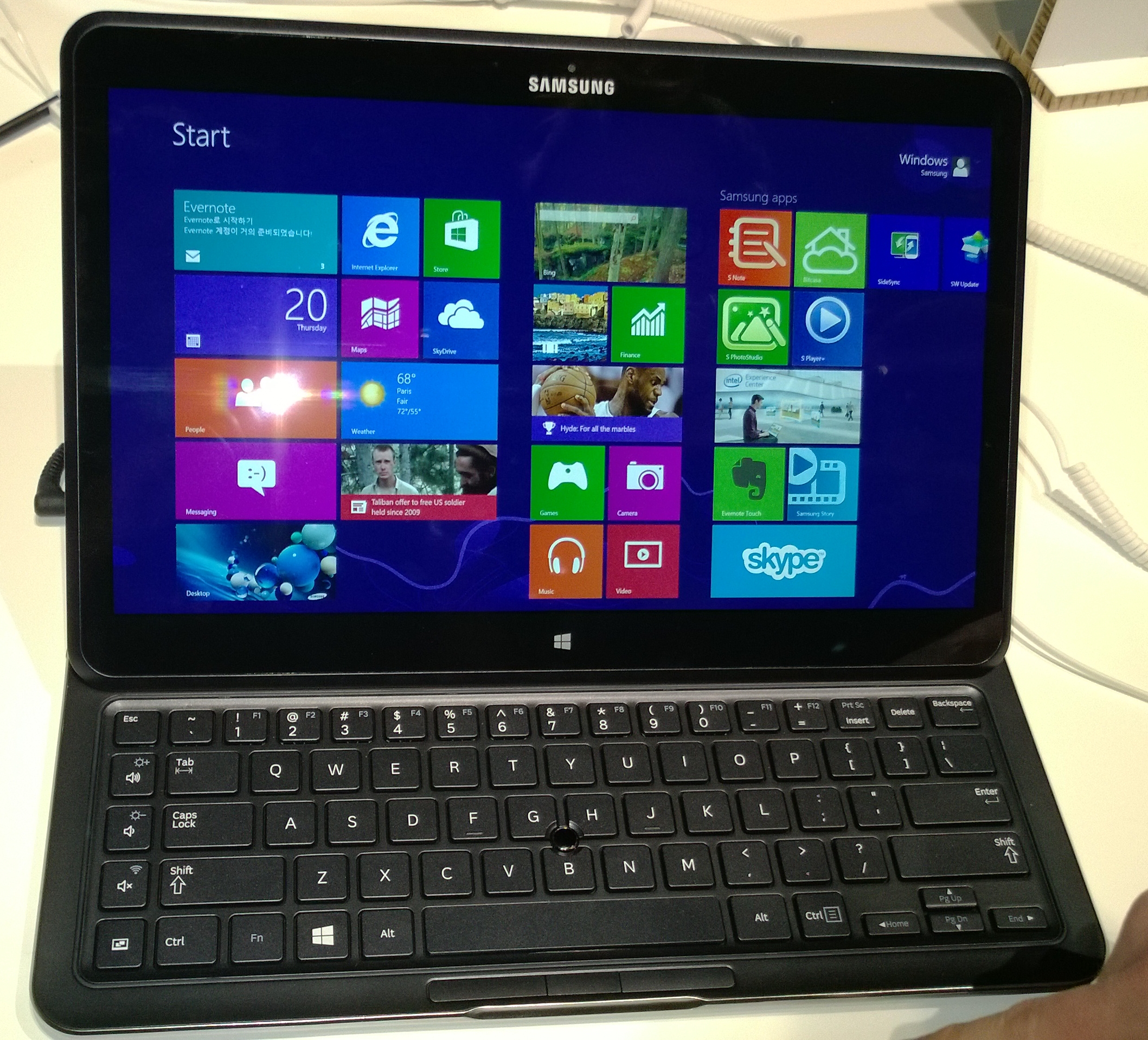 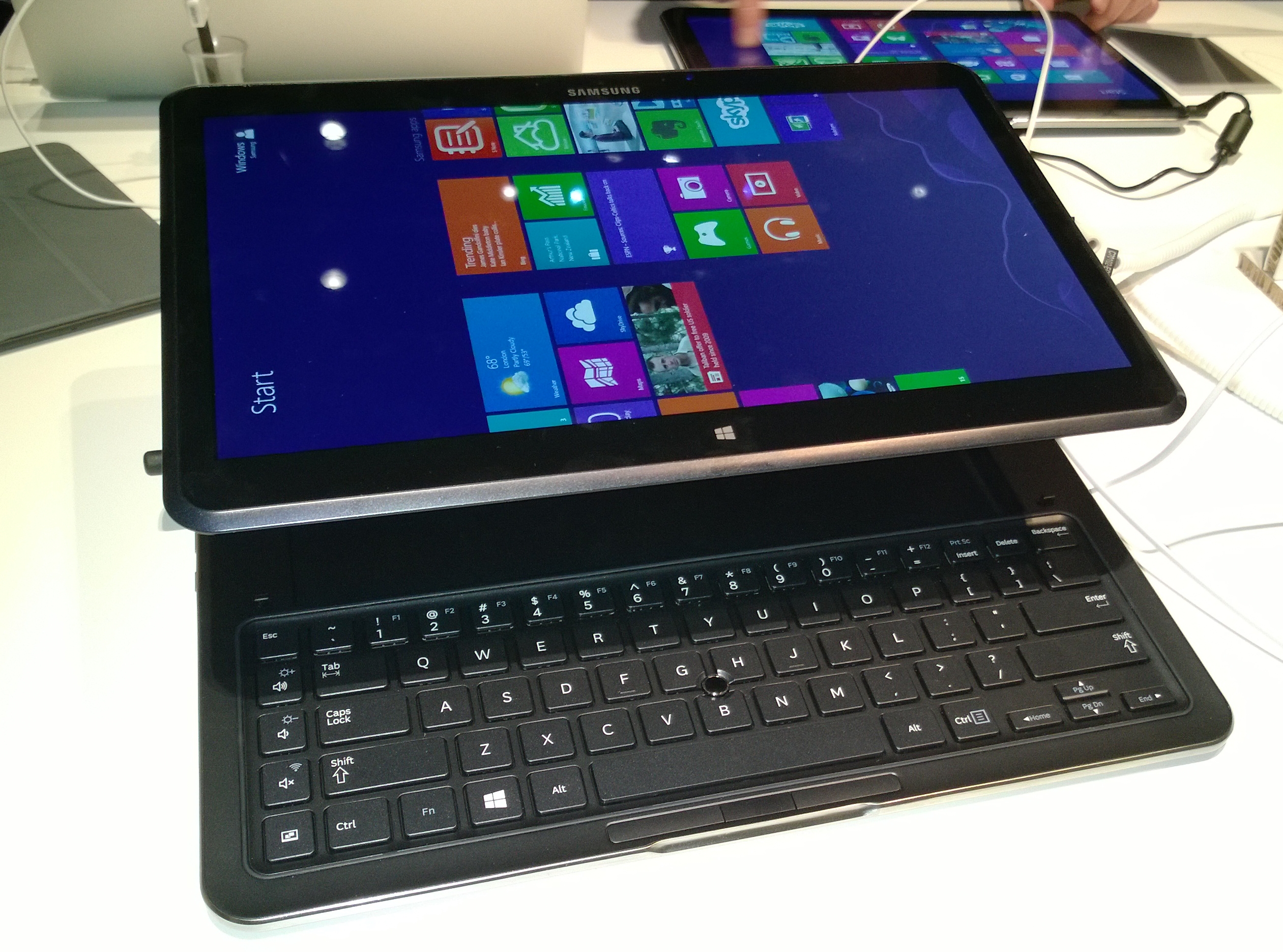 Actually finding how to switch into the Android OS was more challenging than doing it – there’s simply a little icon on the Windows 8 Start screen that says ‘Dual OS’. Click that and you’ll jump straight into the recognizable Jelly Bean interface.

Despite its Jekyll & Hyde nature, Samsung  said the ATIV Q will happily share files and photos between the two different operating environments.

Perhaps the other most notable aspect of the device is its transformable nature, which allows the tablet/screen section of it to be placed at almost any angle, or even appear suspended in the air for when you’re doing things like presentations.

On the downside, devices that try to do lots of things well often come up short in one way or another. For the ATIV Q, while nothing leapt out as terrible the keyboard didn’t fill me with much confidence and felt rather on the flimsy side, however, it was at least roomy and typing felt comfortable.

To me, it seems no secret that Samsung is aiming this device squarely at people who think they might want a tablet but aren’t quite sure if they will get enough use out of it. By providing an OS they know and are familiar with for the ‘worky’ tasks and leaving the same OS they use on their phones for the ‘companion device’ usage, Samsung may well be on to a winner, depending on how it is priced.

More details about pricing and specific availability in different regions will be announced in due course, Samsung said.