HTC announced two image-focused products at its Double Exposure event on Wednesday: the RE action camera and the selfie-taking Desire Eye phone. Here are our hands-on impressions with the devices.

The RE camera’s round shape fits well in the hand, but I’m not sold on the look. It might still grow on me, but my first impression is it feels too much like an inhaler or one of those spy gadget mini-periscopes.

The camera also ends up compromising wearability in favor of ergonomics. The RE armband looked positively awkward on the event models, as if they had strapped a water pick on their arms while going out for a jog. The form factor also makes it less suitable for strapping to your head since it’s so long.

HTC has positioned the device as a mainstream alternative to the GoPro, and that’s a wise move. I don’t really see the camera replacing many GoPros, but it may fill a similar space in the market as the now-defunct Flip camera. Of course, the fact that the Flip failed should serve as a cautionary tale for RE.

RE has two options for video recording: 1080p or 720p. Still photos can be taken in three resolutions: 16MP, 12MP and ~8MP. The camera has a normalize feature that mitigates the wide-angle distortion from the fisheye lens, or you can simply elect to turn the wide-angle mode off.

HTC had an array of accessories on display for the RE, including a hat band, suction mounts and lanyards.

The camera uses Bluetooth LE to establish the initial connection with your phone. From there, you can use Wi-Fi Direct to transfer photos. RE will also tap into Wi-Fi networks on its own to transfer content to the cloud if you so choose. In order to use the timelapse feature on the RE, you’ll need to trigger it via the iOS or Android app.

From what I saw, image quality is good, but not stunning. As Wednesday’s event showed, HTC is continuing to differentiate itself through interesting mobile photo use cases, such as RE and its new Zoe app. RE is a fun, casual device, but I don’t expect RE to blast open the market.

I’m starting to loathe selfies, but another part of me just can’t stop taking them. If we’re all stuck taking selfies, we might as well take better ones. Desire Eye offers a dramatic improvement to your front-facing shots with its 13MP camera and dual-LED flash. 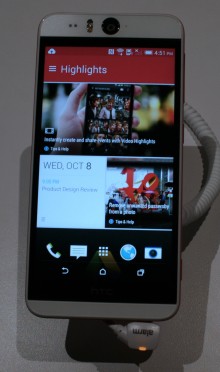 I took a couple of test selfies in the mixed lighting of the demo room and was quite happy with the image quality. Normally a front-camera shot in those conditions would be extremely noisy, but the Desire Eye handled it well.

One concern I have with HTC’s custom Eye Experience software is that these new features, while neat, are adding unnecessary complexity to the camera app. For instance, it’s not clear which of the new tools, such as the button-free “selfie mode,” needed to be toggled on.

I also found the crop-and-scale feature to be gimmicky. It felt more like the kind of option you’d find in a photo sticker booth, as opposed to a handset.

There’s certainly a time and a place for advanced camera controls, but considering that the Desire line is meant to be mainstream, and the selfie features would appeal to nontechnical users, HTC is going to need to solve a UI issue here. Otherwise, new camera features will get buried and the phone’s unique selling points will be neglected.

The phone’s hardware design is fairly nondescript. Maybe it was the orange trim, but the device reminded me some of Xiaomi.

I’m hardly the target market for the Desire Eye, so it’s not much help for me to say that this isn’t a phone I’d buy. Even so, I do like the improvements to the front-facing camera and would like to see this become a trend in other premium smartphones – minus the irritating selfie marketing copy, of course.

Every time I hear the Desire Eye, the editor in me has to fight the urge to not call it the Desire Me instead. Then again, given the phone’s billing as the ultimate selfie machine, maybe that name would also be accurate. Still, promising the world’s best selfies probably isn’t going to single-handedly turn HTC’s fortunes around.