Alongside Monday’s release of iOS 8.1, Apple activated its new Apple Pay service for in-app and retail payments. We tried it out to see if it lives up to the hype.

Mobile payments haven’t quite taken off yet. I’m sure more than a few of you have taken to using Google Wallet and other similar services for NFC purchases, but these are still the exception, rather than the rule. Apple is taking its entry into payments very seriously, working with hundreds of banks and major brands for the launch.

To get started, you’ll need iOS 8.1 installed on an iPhone 6 or iPhone 6 Plus. Oddly enough, Apple Pay doesn’t get its own app. It’s located inside the Passbook app, where you can also store loyalty and gift cards. This is going to be a major obstacle for users, as most won’t go hunting around their phone for a new feature that they don’t know much about. 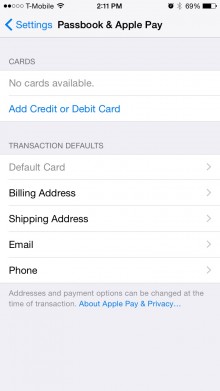 iOS 8 settings now has a “Passbook & Apple Pay” section where you can activate the service. Apple lets you import the credit card you use for iTunes purchases into Apple Pay, but you’ll need to verify the card with the security number on the back. If you want to add a new card, just hold your phone over the card to have it recognize the number and expiration date.

I headed to the Apple Store to make my first Apple Pay purchase. The assistant hadn’t used it for a transaction either, but she figured it out pretty quickly. To pay, I opened the Passbook app, then held my finger over the home button. A “Pay with Touch ID” animation pops up while your print is being scanned. After a second or two, the payment goes through and you’re all done.

Update: While the Apple Store staff told me to open the Passbook app, you can actually use Apple Pay while your phone is asleep. The NFC reader in the iPhone 6 will recognize when it’s held over a reader with your finger on the Touch ID button. Once the transaction goes through, you’ll hear a beep and feel a vibration.

If you don’t want to use Touch ID, you can disable it in settings and elect to use your Passcode for payments. I wouldn’t recommend that, though, as fingerprints will be harder to replicate than the usual four-digit code that people use.

Apple generates a unique Device Account Number for each of your payment cards that’s tied to your iPhone and stored on the Secure Element chip. Apple Pay also makes a unique security code for each transaction. As a result, Apple can process payments without having to send your credit card numbers to merchants.

In addition to retail payments, developers can also integrate Apple Pay into their apps. For instance, tapping on an item in the Target app pulls up an Apple Pay option. From there, you double-check your payment and shipping info and then approve the purchase with Touch ID.

One issue that I ran into with Apple Pay is that the Passbook app shows the last four digits of your card for anyone to see. Twitter designer Paul Stamatiou had to request a new credit card number after posting the above video [Ed. note: Video embedded with permission]. Apple should add an option to hide card numbers and also create nicknames for each card.

The biggest issue with Apple Pay right now is the lack of guidance. Everyday users wouldn’t think to open Passbook in order to use it. It’s also not clear how to make a purchase at the point of sale. Plus, how do I even know if a store has started taking Apple Pay? Will retail staff have sufficient training to make Apple Pay convenient enough for customers to continue to use it?

If Apple wants its new payment platform to take off, it will need to address some of these questions. Based on our tests, the Apple Pay technology is ready, but the user flow could use work.