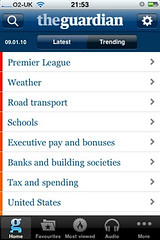 The Guardian’s recently launched iPhone app has received rave reviews. One of its many game-changing features is its constantly updated list of ‘trending’ stories.

Here, The Next Web takes a look at just how this list of  trending stories is created… but first, that word ‘trending’.

The use of the word ‘trending’ as a verb has been with us for a long time and at least for as long as the World Wide Web which reaches the age of 21 this year..

However, in social media terms, ‘trending’ has really fallen into common parlance with the arrival of Twitter and our ability to search discussions taking place in real time in order to track the key topics on people’s lips.

This ‘super-sensing’ ability has come into its own as the world has discovered a way of following major events around the globe simply by following the key words being used most often in the millions of tweets sent every hour of every day.

Twitter-trends are being used to tip-off emergency services in the event of earthquakes, many minutes ahead of offical scientific sources. Trending topics along with keyword searches and hashtags are also used heavily for following weather patterns, global conflicts, general elections, sporting events, conferences… quite literally, you name it!

So when The Guardian’s iPhone app launched with its own built-in Trending topics section, The Next Web team began to wonder whether it was mashing up its own stories with Twitter trends, or gaining its ‘real-time’ perspective from somewhere else.

We asked Nik Silver, The Guardian’s Head Of Software Development, just what was going on.

Well, first of all Nik pointed us in the direction of Open Platform. This is the suite of services that makes it possible for partners to build applications with The Guardian by accessing both the content API and the Data Store.

Nik confirmed that it is this ability to query Open Platform’s content database and its accompanying high quality datasets which, when combined with the web analytics which The Guardian team uses to analyse traffic throughout its web domain, enables the creation of a real-time trending topics across the all news content.

Web analytics identify the most popular stories and the tags associated with those stories. Those trending tags are then cross-referenced with Open Platform to create the Trending topics for the iPhone app.

This approach is evidenced by another feature of the app, ‘Most Viewed’ stories, which complements the Trending list by detailing the specific stories which have received most attention in the last 24 hours. Unsurprisingly, the order is similar to the Trending list.

Analysis includes traffic on the Guardian website itelf, that generated from RSS feeds as well as from stories being read within the iPhone app itself.

The Guardian’s forward-looking Open Platform was introduced in 2009 in order to provide a useful environment for anyone who creates for the internet. Developers around the globe can formally access Guardian content in a way which serves the organisation’s objective of making its content available in as many places, to as many readers as possible.

With the launch of The Guardian’s iPhone app, the availability of Open Platform has enabled the team to benefit from its own forward-thinking in order to create one of the most advanced newspaper apps in the iTunes App Store, not just in the UK, but around the world.

Whilst The Guardian app resides on the iPhone, its Trending section represents the current interests of those consuming Guardian news stories regardless of channel, device or geography.