GSF India made a big splash last September when it teamed up with 500 Startups in the US and Seedcamp in Europe to launch an accelerator program to identify India’s top startups in Delhi, Mumbai and Bangalore.

“The program is designed to create the next wave of product-oriented technology start-ups in the areas of mobile, social, local and cloud,” founder Rajesh Sawhney said at the time. “There is no reason that Indian entrepreneurs cannot create the next Instagram, or the next Twitter, or the next Inmobi,” he added.

Fast-forward six months and expansion is very much on the cards for GSF India, which runs a startup incubator, successful events and makes investments, as well as its accelerators — the latter of which is now expanding into Chennai.

“As I think of 2013, it’s very clear to me that we will expand to more cities. We are moving into Chennai — where we’re seeing green shoots and the beginnings of a very fresh ecosystem — and will expand to one or two more cities. By the end of the year, we will be funding 40-50 companies,” Sawheny told TNW in an interview.

“That’s where we’re very different to anything that’s been done in India so far,” he added.

It isn’t just India that is in Sawhney’s focus. The former President of Reliance Entertainment says that the immediate goal is to have 10 accelerator ‘centers’, some of which may be located outside of the country. In particular, GSF India is researching emerging markets, including Southeast Asia and Africa.

Inspired by 500 Startups, but different

The broad and ambitious goal of funding a large range of companies across a number of very different regions strikes comparisons with 500 Startups. However, while Sawhney is friends with Dave McClure — having hosted the 500 Startup Founding Partner and Sith Lord (!) during the recent Geeks On A Plane trip to India — he believes that their respective approaches differ.

“I like Dave’s passion and some of what we do is inspired [from 500 Startups]. His approach is to bring methodologies for the developed world to the developing world, whereas mine is the other way round.”

Sawhney’s belief is that, aside from being a huge market itself, India should be a country from which globally significant innovation and startups are birthed and then develop. He wants to bring the best of the world to India, and also take the best of India to the world.

It stands to reason then, that partnerships with investors like 500 Startups are important — both for funding opportunities and the exchange of ideas — and Sawhney says half a dozen or so more partners will be announced soon. He is also committing to hire more international entrepreneurs-in-residence for the incubation side of things.

There have long been incubators and accelerators in India — Microsoft’s Azure program is doing well there — but, while what GSF India is doing may not be new per se, it is the one with the broadest aim and widest overseas backing.

“India is a broken system,” Sawhney says, pointing out that many VCs have become lazy and short-sighted, while some entrepreneurs are content to get by rather than learn from mistakes and start afresh.

“How do I engineer innovation? It’s a tough challenge that excites me. Sure, you can stay focused on the local market, but I get excited about people here who think global,” he explains. “We’re searching for that thing that India can offer the world.” 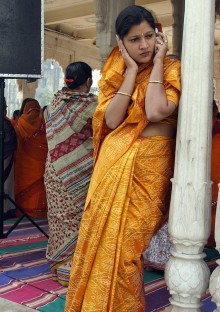 While India’s market may be full of unrealized potential today — less than 10 percent of its 1.2 billion population has fixed-line Internet access, for one thing — Sawhney believes that its sheer size and the rapid adoption of technology — primarily mobile — makes it an ideal platform to build services that can have value across the world.

“There will be millions more mobile Internet users coming online,” he says, “giving a new audience and new perspective on the Internet. Catering for these users, those companies are what we are building… I’m betting my life on that.”

For that reason, the GSF India project appears — from a long discussion with Sawhney — to be based on long-term potential rather than short-term gains and ‘quick-buck’ potential. The latter two are symptoms of some emerging markets, where some VCs seek easy money investments as opposed to community growing, longer-term activities.

It is only in its early stages but Sawhney says that already he is seeing signs that the first batch of companies coming through the GSF India program are gaining potential. He expects that nine or ten of the initial class of 15 will close funding in the coming months, some of which are taking on investment from overseas backers.

Right now, Indian content services — including streaming movie and music startups — are among those that are seeing the strongest traction outside of the country. Unlike these, however, which appeal to the expatriated diaspora, GSF India seems to be aiming to build more ‘value-add’ focused companies.

No doubt ambitious, Sawhney and GSF India have a vision for the country that is quite unlike anything else being conceived among its mainstream investment community. Perhaps ahead of its time, or perhaps coming in at just the right moment; we’re keeping an keen eye on it and its graduated startups.

Related: Bangalore brings India’s startup ecosystem into the limelight, but how exactly is it faring?

Headline image via Shutterstock, other images via Thinkstock and tierecke / Flickr