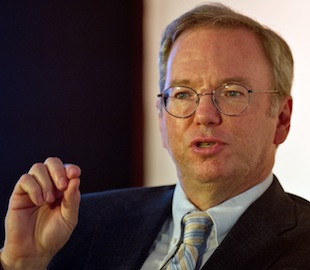 Google’s executive chairman Eric Schmidt is highly optimistic — he thinks that government censorship can be ended within a decade, Bloomberg reports.

The key to that? Encryption. Schmidt said in a speech, hosted by the Johns Hopkins University School of Advanced International Studies, that “the solution to government surveillance is to encrypt everything.”

He acknowledges that the NSA and other countries have probably broken some of the encryption standards used today, but “it’s always a cat-and-mouse game” and in the race for stronger protection over Internet traffic, he thinks the censors will lose. As of now, Google and other Internet companies have already made their networks more secure in response to the NSA revelations.

As for China, the country which is literally obsessed with patrolling the Internet, Schmidt says he thinks Chinese citizens will start using technology that authorities there won’t be able to control or stop. “You cannot stop it if it’s a good idea broadly held,” Schmidt says.