This week, Google marks its 15-year anniversary and the team brought members of the media to the original Google House to talk about the future of the company. During the press conference, it unveiled several updates to search, designed to help users access information quicker, including new interfaces and features for its iOS and Android apps, along with better integration with the Knowledge Graph.

Google turns 15 on 9/27. Today we’re announcing some of the latest improvements to #googlesearch. Stay tuned for updates! #google15

Back in the day

It’s appropriate to say that Google is clearly nostalgic about the old days as the home is filled with old logos and icons representing the iconic search engine company’s rise to prominence on the Internet. Susan Wojcicki, the company’s Senior Vice President of Ads and Commerce, took the stage to reminisce about the early days of Google. If you didn’t know, she was the landlord for co-founders Larry Page and Sergey Brin — the garage they rented belonged to Wojcicki and her husband.

Three things that she said that has remained the same over the years are its commitment to search and build amazing experiences to help people find information; the focus on becoming a global company (in the early days, Page and Brin had a whiteboard at Wojcicki’s home that said “Google Worldwide Headquarters”); and an emphasis on “thinking big” (she says that people are still thinking about projects that will help the greater good, such as Glass, balloons, and driverless cars.)

Searching for the future

Google Senior Vice President and software engineer Amit Singhal took the stage afterwards to talk about the company’s future in search. Fifteeen years ago, you had to go to a website on a “bulky computer”, turn it on, fire up the dial-up modem, and look up the information and wait for it to be returned. Over time, retrieving answers to questions became possible on the go with the evolution of mobile devices. Singhal says that in today’s age, we’re comfortable with finding information no matter where we are, whenever we want.

Online information and Internet users have grown in equal proportion, according to Singhal. The number of people that are online has grown steadily over the past 15 years and search has become the main catalyst for helping to make content findable.

The company’s technology has been evolving since its release in 1997, including introducing an ad model in 2000, spell check, auto-correct, universal search, and other assorted features in a single interface that you could find information easily. Singhal says that the search process has gotten faster too thanks to Google Instant, released in 2010, which saves between 2 and 5 seconds.

So what’s next in the world of search? Google says that it’s about helping users make “(even) more of your day” by finding out what challenges they’re facing and how they can tackle those problems using the search technology. It boils down to three experiences: answers, converse, and anticipate.

With answers, the knowledge graph has been able to provide users with more detailed content based on insights Google gleams from the information it harnesses from throughout the Internet and your behavior online. When it comes to converse, Singhal believes that voice will play a crucial role in helping users get the answers they need.

Google is working on a new design language that it says will help build future functionality in a fluid interface. 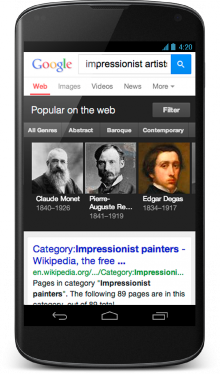 Tamar Yehoshua, Google’s Vice President of Search, shared how search is being improved. During a demo query of the “Eiffel Tower”, she only mentioned the search term once, helping to make the experience seem more natural: “Where is the Eiffel Tower? How tall is it? Tell me more about its construction.” The knowledge graph is also being exploited to help hone search results so you can look through more information about topics and get detailed content. Starting today, Google will begin providing new interfaces on updates of notable people, music playlists, and more with Google Now cards.

Here’s what you’re getting:

But that’s not all, Singhal says that Google’s search engine algorithm has been changed once again — it actually already happened, but you didn’t really notice. He says that in 2010, Page Rink was changed to something called Caffeine and just recently it’s been updated again. Internally, the new algorithm is called Hummingbird and affects about 90 percent of searches worldwide.

With Caffeine, Singhal said that it was an effort to better index sites, crawling, and ranking, but over the past few years, technology has evolved, but queries have gotten more complex and so Hummingbird was developed to handle those needs.