In the inaugural study released by app analytics firm, App Annie Intelligence, data shows that, worldwide, the Apple store is seeing revenues four times larger than the Google Play store, but isn’t growing at an impressive rate — in fact, the year-to-date growth actually is greater for the Google Play store at 311% compared to iOS at 12.9% in 2012.

With over 80% of the Top 100 iOS publishers using App Annie’s services along with more than 150,000 apps relying on the service to track downloads, revenues, rankings, and reviews, the company hopes that it will provide its readers the necessary insights to see who the most popular apps are each week and which apps bring in the most revenue. The data is based on market estimates that are derived from App Annie Intelligence data. 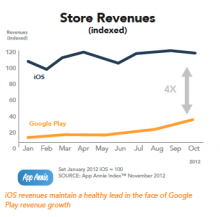 The report shows that iOS surpasses Google Play when it comes to revenue and if you look at the free downloads, there were more apps downloaded for Apple devices than Android, but not by much — in fact, downloads for Android apps grew 48% in the year-to-date, greater than iOS at 3.3% growth.

Bertrand Schmitt, the CEO of App Annie, said that the “gap between global revenues on iOS and Google Play is still there, but the gap is shrinking every month, creating more opportunities for publishers to generate significant revenue growth in several countries on Google Play.” 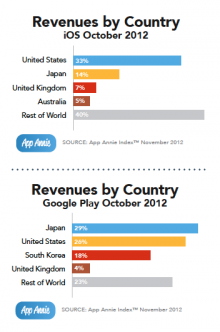 But when you look at Google Play revenues, Japan is in the lead with 29% with the United States in second with 26%. South Korea and the United Kingdom round out the bottom with the rest of the world being average with 23% of the revenues.

Update: Apple has disputed the numbers reported by App Annie and has reached out to VentureBeat to point out it believes the 12.9% growth rate is incorrect. It says that it’s over 200%. We have reached out to App Annie and Apple for comment to get further clarification on the matter.

In an earlier version of this post, we incorrectly stated Google’s app store revenue exceeded Apples. The facts were reversed from what it appeared in the report. We have made the updates to this post so that it reflects the correct figures as per the App Annie report. We apologize for the error.