More than six months ago, Google Play for Education was officially unveiled for tablets, as the internet giant sought to tackle Apple’s K-12 market share with cheap apps and tablets. And today, Google has announced it’s introducing support for multiple accounts to tablets under the scheme. 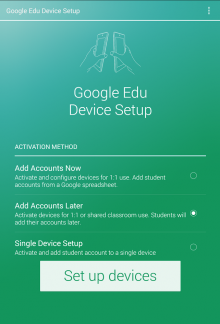 To recap, Google Play for Education is basically Google Play, but curated specifically for kids by teachers, with apps sorted by age and genre. This means you can find science-based applications that are appropriate for specific age groups, while it also contains educational videos and classic books for the classroom. It remains a US-only initiative for now.

Introducing multiple accounts makes a lot of sense, given that it’s often not practical or affordable for each student to have their own dedicated tablet. This makes it a lot easier to share the goodies, so to speak, with content saved specifically for each user.

Up to five pupils can be added to each account now, with a unique PIN gaining them access to their profile.