Google has been declared as the number one global website for 2012, narrowly pushing out Facebook which claimed top spot last year.

Yunker personally reviews every website in the report — and has done so for all eight editions of it. In terms of which companies make the list, Yunker says:

“We survey a wide swath of global companies across all major industries to provide a well-rounded overview of the state of Web globalization.

Within each industry, we include the leading companies with a focus on brand leadership. We include more than 30% of the Fortune 100 companies and 70% of the 2011 Interbrand 100 Best Global Brands.”

The Report Card analyzes each website according to the following four criteria:

As we noted in our guide to website internationalization piece last year, Google has typically always ranked top on Yunker’s Web Globalization Report Card, but Facebook muscled its way to pole position in 2011. According to Yunker at the time, Facebook had been particularly innovative over the past year from a multilingual perspective, and he noted that these innovations had big implications for how millions of companies integrate social networks across their local websites.

Facebook’s social plugins kicked-in back in 2010 with the launch of its Open Graph API and have proven very successful. 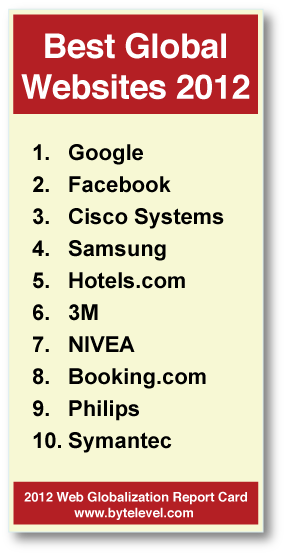 At the time of the last global website report card, over two million websites integrated with Facebook, and 10,000 new sites were joining each day. But as Yunker pointed out, what many haven’t noticed is that these plugins are also multilingual.

This year, however, Google has reclaimed top spot in the report. “Although Google continues to struggle to harmonize its global navigation across its many applications, the company also continues to invest in globalization,” says ByteLevel. “Google now supports more than 140 languages on its search engine and its new Google+ app supports an impressive 40 languages. Facebook’s mobile app, by comparison, supports just 13 languages. Though Facebook continues to improve its global navigation, its language growth stalled in 2011.”

The top 10 websites support an average of more than 50 languages, so it’s clear to see that Google is way ahead from a language perspective.

Two new companies also made this year’s top 10 list – Hotels.com and Booking.com – exhibiting what the report says is an “impressive commitment to mobile devices. Any company that is developing a global mobile strategy should study these two companies.”

Curiously though, Apple doesn’t feature in the top 10 at all, despite its dominance elsewhere in the digital sphere.

“I’m anticipating I will get asked this as I was asked the same thing last year,” says Yunker. “After all, how can a company with nearly $100 billion in the bank not be in the top 10?

“It seems that Apple has been rather tight-fisted with its translation spending; the company supports far fewer languages on its website than on its mobile operating system iOS. Does it make sense for an iPad and iPhone to support Arabic and Hebrew and for Apple’s website not to support these languages?”

Indeed, Arabic is spoken natively by over 300m people around the world, so it does seem like a glaring omission. Just 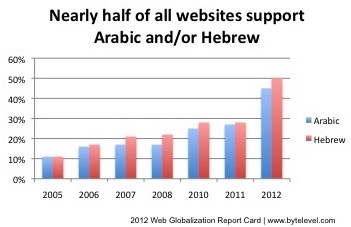 yesterday, we reported that Twitter was finally adding support for right-to-left languages such as Arabic and Hebrew through its crowdsourced translation initiative.

“Language parity between mobile and PC is a key component of the 2012 Report Card and Apple did not fare well in this regard,” adds Yunker.

Of all the websites reviewed, around half now support Arabic and/or Hebrew, a figure that stood at only around 10% back in 2005.

It’s worth noting that languages only account for 25% of a website’s ranking in this report. It also evaluates depth and breadth of local content, local-language social network support, the efficacy of the “global gateway”, and global consistency across platforms.