Google is revamping the Hangouts sidebar found on the right hand-side of Google+ on the Web to give you better information and notifications about live and pending Hangout parties that you’re able to join.

The tweaked design, rolling out over the next few days, will now show a series of invites for video parties that you are able to participate in. This includes invites from other Google+ users that have requested your presence, as well as public video calls from any user that you have listed in one of your circles. 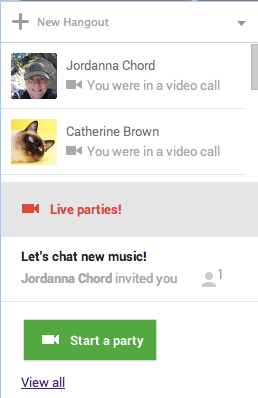 Each invite will list the name of the Hangout party and the person that called for you. A small, grey icon to the right of each request denotes the number of people who are already participating in the Hangout party; this should give you an idea of who could already be on the call.

By clicking on the invite you should jump into the Hangout party automatically. There’s also the giant green button underneath to start your own group video call, as well as the option to see every Hangout party that you can currently access.

Not to be confused with the broadcast-friendly Hangouts On Air, parties are designed for personal, face-to-face video calls with up to nine other people. It’s one of the easiest ways to quickly chat with a group of friends, colleagues or family over webcam for free, but there are still a number of Google+ users who don’t know it exists.

Now that it’s visible within the Hangouts sidebar of Google+, it’s likely that Google will see greater take-up of the feature, increasing engagement both with its social network and messaging platform.