Google News holds a special place in the world of journalism. When multiple media outlets report on the same topic in a short amount of time, the articles that make it to the main News page are seen by the most people.

It’s no different than any other media industry. If you’re a musician, you want your song to show up on Spotify’s main page. If you’re in a comedy movie, you want it to be listed first in the “comedy” section on Netflix.

That’s why one of my crowning achievements as a journalist was convincing the Google News algorithm I was the queerest artificial intelligence reporter in the world.

Back in June I published this article explaining how my TNW author profile was influencing the number of my articles that showed up in Google News if you did an in-app search for “artificial intelligence queer.”

At the time, it was relevant because it was Pride month and a lot of people were covering how AI technologies impact the queer community.

When I casually searched for “artificial intelligence queer” to see what my peers were writing on the topic, I was astounded to find that a large portion – about 1/3 – of what Google News returned was my work. And most of those articles had nothing to do with LGBTQ+ issues at all.

As I wrote then, we couldn’t have bought that kind of search domination. Had nobody else written about LGBTQ+ and AI all month? No, it was June so there were literally dozens of articles on the subject.

When I went to the Google Search site and performed the same query it produced different results. In fact, even if I clicked on the “news” tab from the main Search page, it still didn’t show the same ratio of one of my articles for every two from someone else.

The Google News interface, for whatever reason, seemingly draws information from my TNW author profile and uses it to influence query results.

Apparently there aren’t a lot of journalists who use the word “queer” in their indexed author page.

Heavy is the head that wears the crown and, to be honest with you, it can be quite taxing to be queer. I’d rather not be the queerest AI journo on the planet for more than a few weeks. So, a while back, I changed my author profile.

And, voila! Like magic, my reign was over. I searched for “artificial intelligence queer” on Google News and it returned a smaller number of my articles. And all of them were about being “queer” in STEM. Problem solved! Hooray?

No, of course not.

Admittedly, I’m no longer the queerest AI journo in the world. But hear me out because, as far as Google News is concerned now, my work on the “artificial intelligence LGBTQ+ issues” beat is important enough to take up even more of the search results than my work as a “queer” AI journalist. 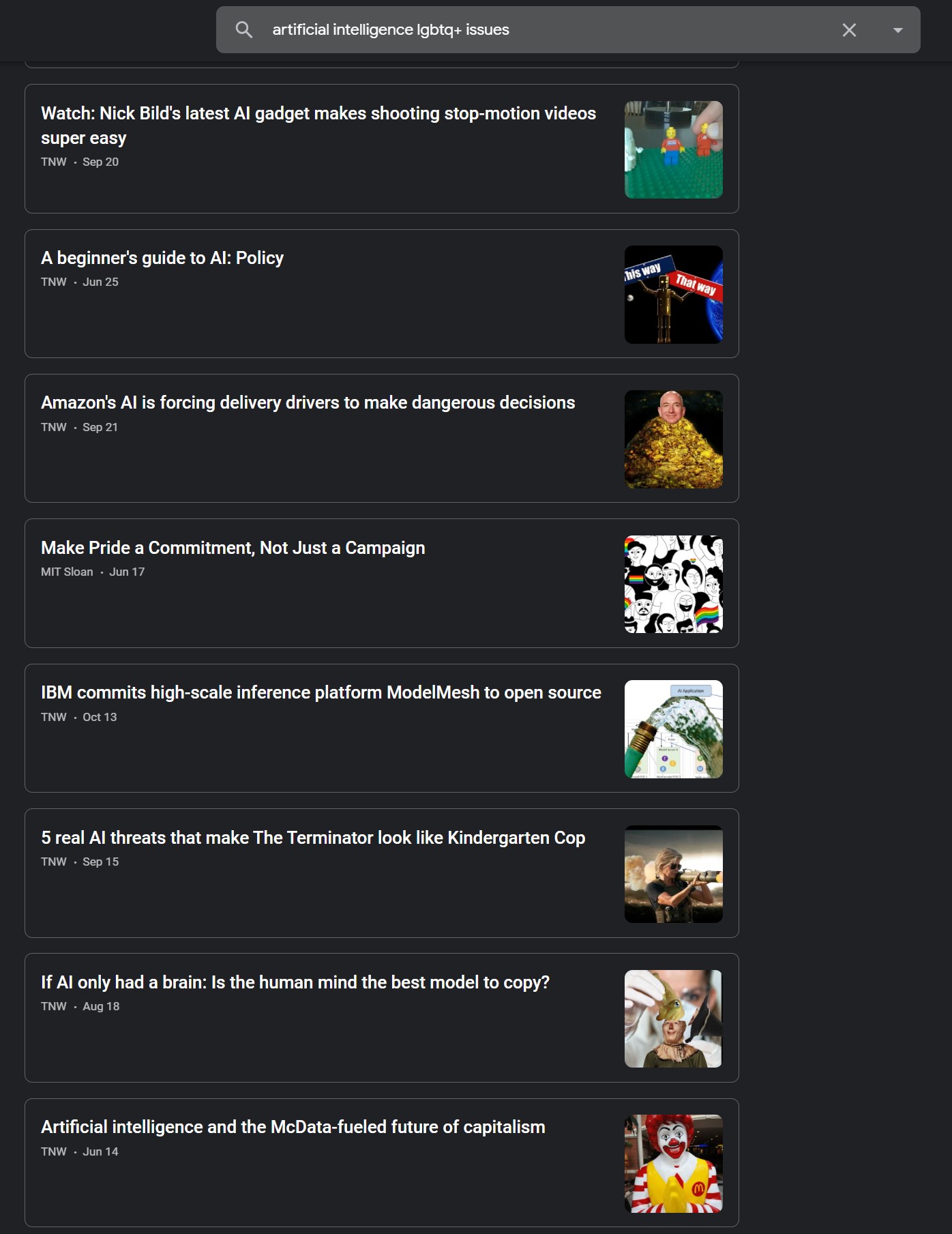 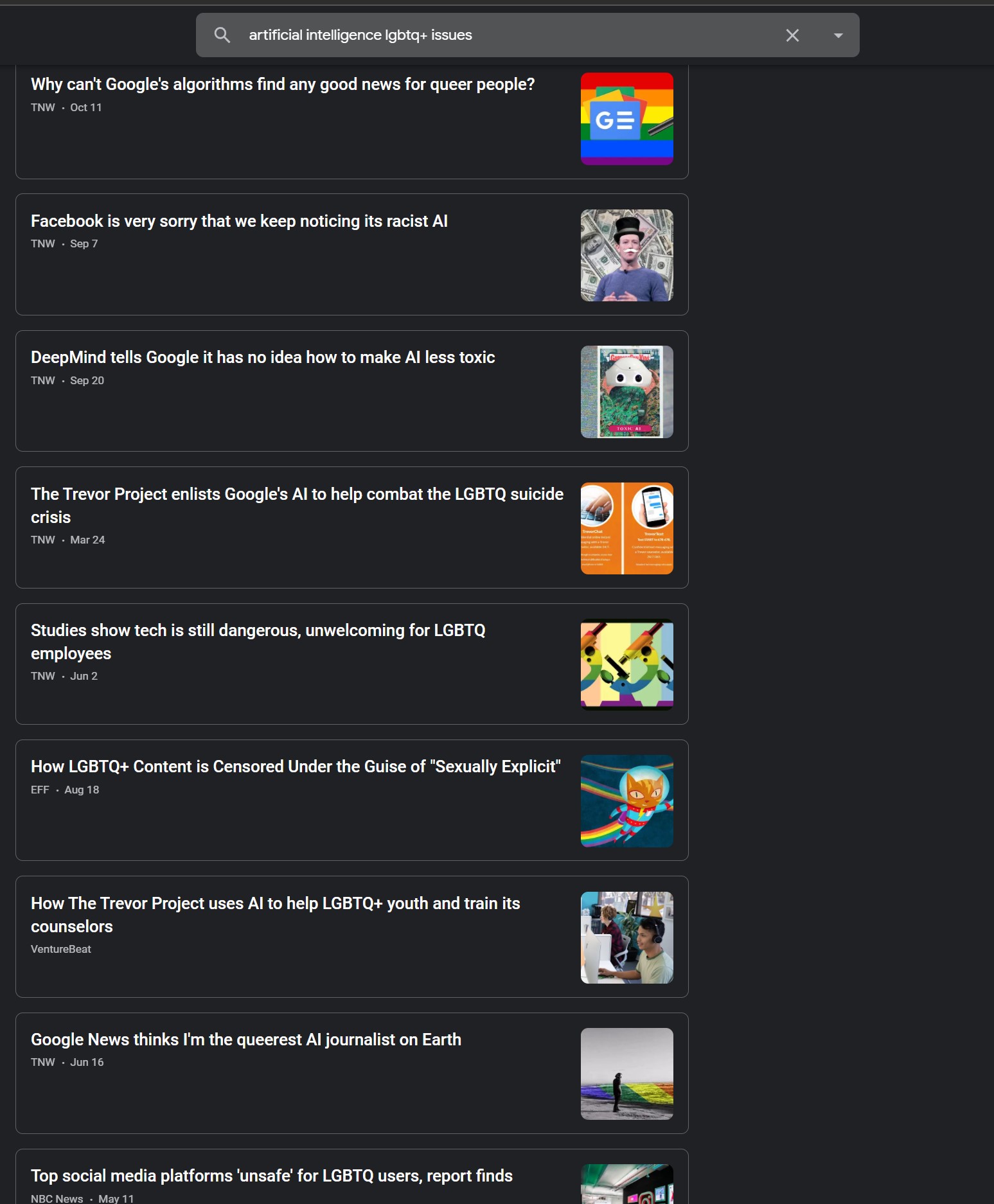 By changing my TNW author profile to say I covered “LGBTQ+ issues,” it turns out I was using a term that even fewer journalists use in their profiles.

If you search for “artificial intelligence LGBTQ+ issues” in Google News, about two-thirds of the articles in the search results are mine as of the time of this article’s publishing.

If I can’t escape my destiny as an ambassador between the queer AI journalist community and the Google News algorithm, I must embrace it.

The LGBTQ+iest journalist on the planet

And with great power comes great responsibility. Which is why I changed my TNW author profile to say I cover “Spiderman” today.

It could take a few days for the changes to reflect in Google indexes, but it’ll be worth the wait in my opinion.

If Google News is going to associate my articles with whatever I put in my author profile, I’m going to manifest a world where my name and Spiderman are synonymous. Why not?

The moral to this story is that algorithms are dumb. No human curator would have made the same mistakes.

And when algorithms deal with people, those mistakes can be harmful. Who knows how many journalists who wrote about technology for Pride this year lost page views because Google News decided to surface my articles about policy and physics instead of their relevant pieces?

Today, I’m able to exploit the algorithm for kicks. I can get my stories to show up under specific search queries in the Google News interface just by changing my author profile. It’s kind of funny.

But what if someone decides to silence queer journalism tomorrow by exploiting the algorithm in such a way that searching for news on LGBTQ+ issues, using any query string, would result in mostly Breitbart or Infowars articles surfacing? There’s nothing funny about that.