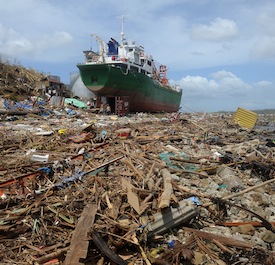 Google announced today it has launched crisis tools to help gather and relay information to do with the devastation wrought by a powerful typhoon in the Philippines. Typhoon Haiyan (also known as Yolanda) left a trail of destruction over the weekend, with officials fearing that up to 10,000 people may have died.

The tools include Google Person Finder, a Web app for individuals to either search for someone else or leave details about yourself and others. “As the number of names and records build, the tool will hopefully make it easier for those who are safe to pass on their news to anyone worried about them,” Google notes. A mobile version of the tool is also available.

Google has also come up with a Typhoon Yolanda Relief Map, which provides updates on shelters and other information from the disaster zone.