Google is making one of its newest products generally available to the public today, hoping that it will allow people to receive instant help through live video feeds. Called Helpouts, the app available on the Web and Android devices lets users get advice from experts at nearly any time of the day.

Previously unveiled in August as a private service, Helpouts is now open to anyone and they can tap into more than 1,000 vetted providers. At launch, it will feature eight categories, including Home & Garden, Computers & Electronics, Health & Counseling, Nutrition & Fitness, Fashion & Beauty, Art & Music, Cooking, and Education.

At a press conference today, members of Google’s Helpouts team spoke about this new marketplace that can enable anyone to learn how to repair their computer, take music lessons, bake a cake, and do many other things. It’s all about convenience, something that the Web offers better than any other medium. Google believes that Helpouts can foster the growth of a new ecosystem and eventually an API will be offered to enable developers to expand the scope of this service. 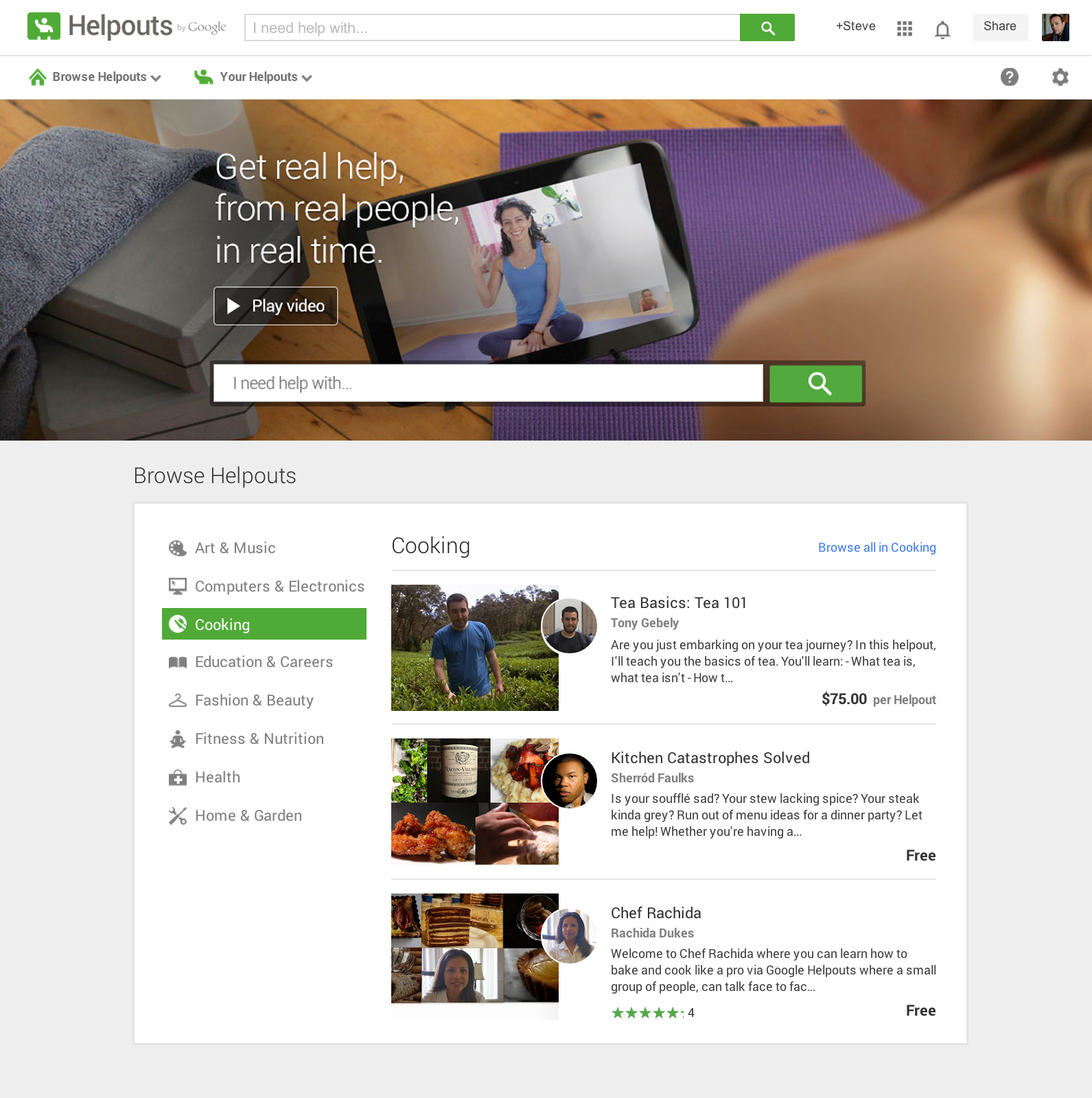 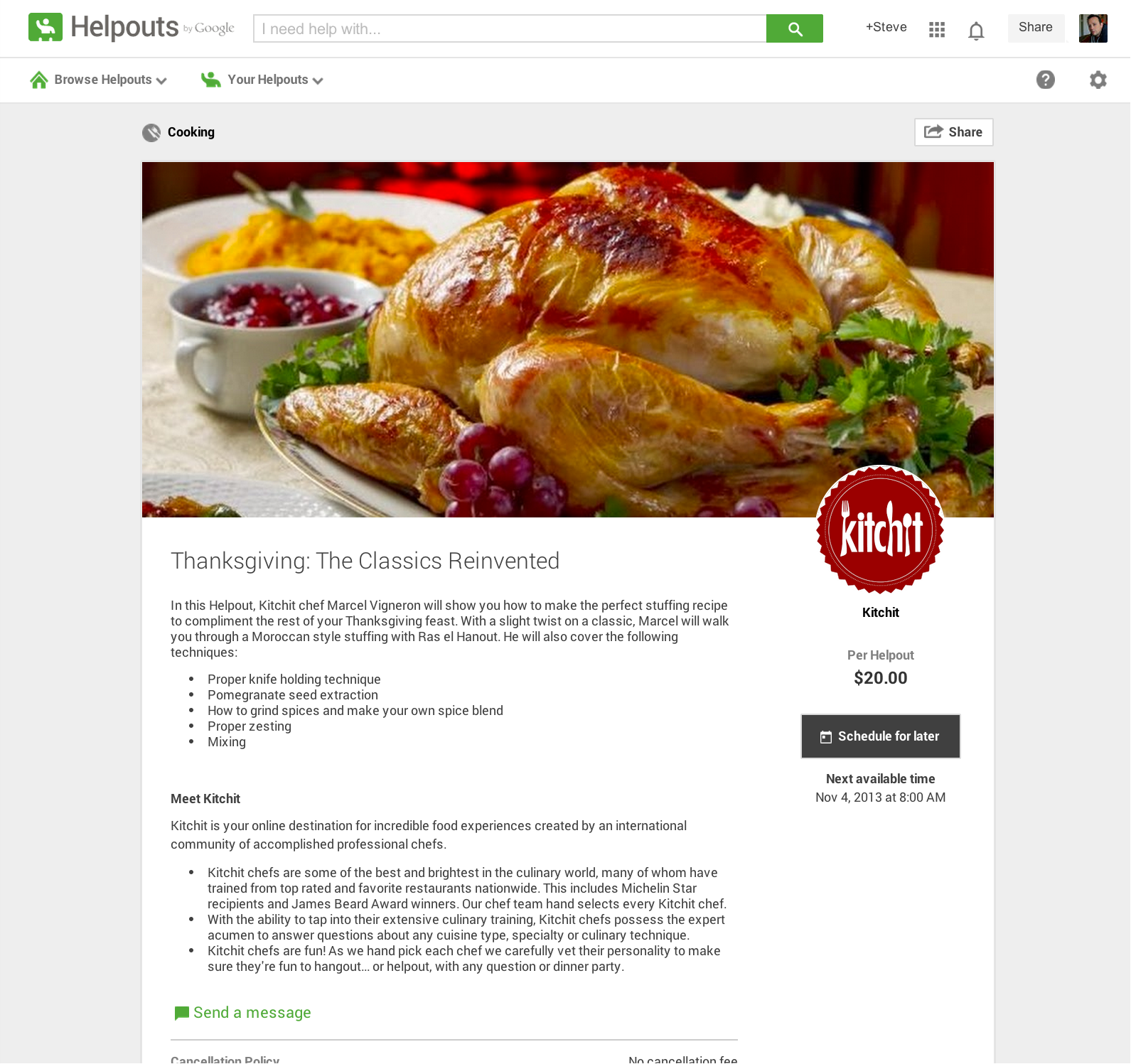 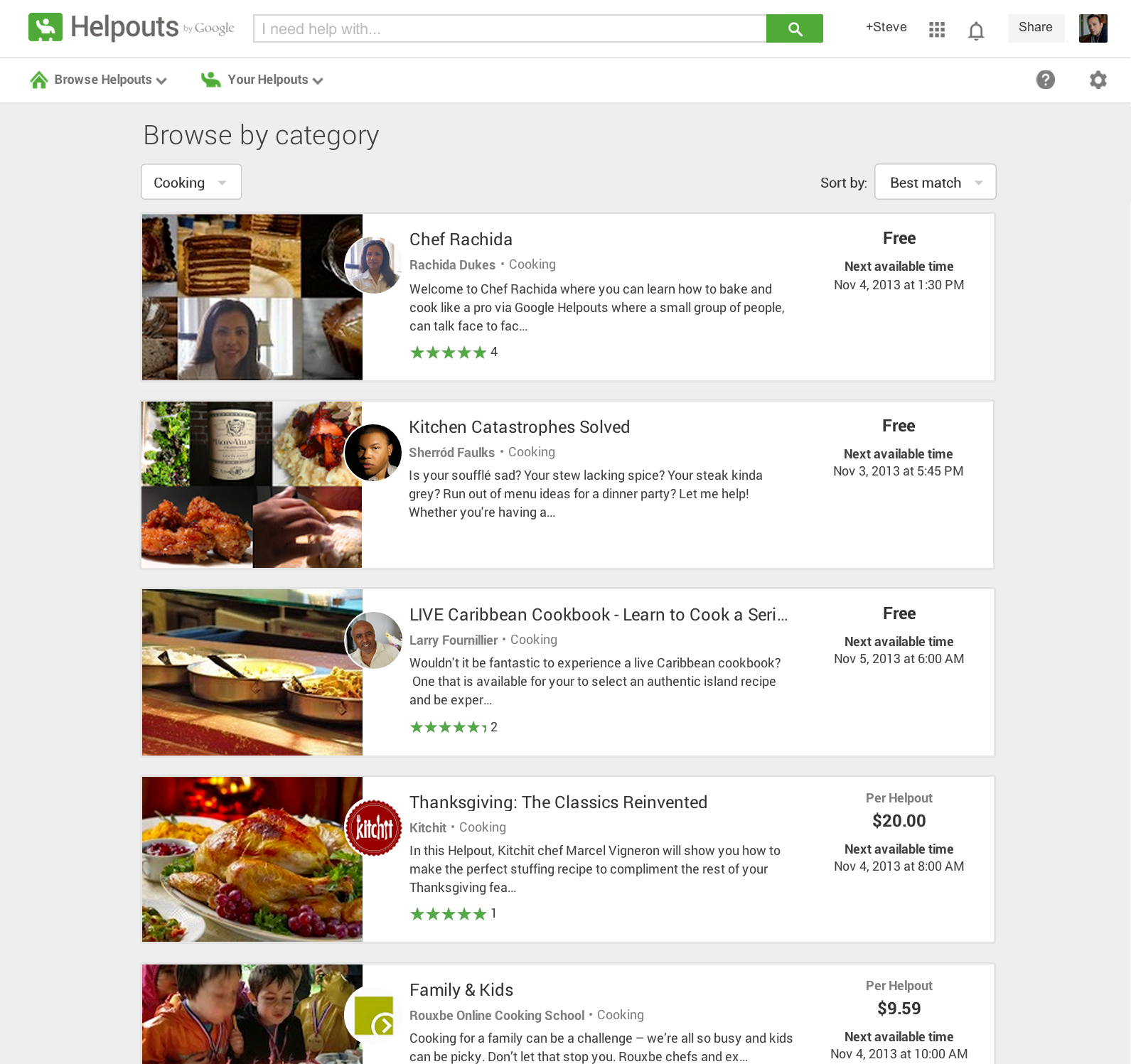 In showcasing Helpouts, Google’s Director of Product Management Osi Imeokparia said that there are five key elements behind the service:

One question some may ask is how different this is from what you can find currently on services such as YouTube.

Udi Manber, Google’s Vice President of Engineering, told us it’s more about receiving immediate help and being able to talk to someone. This means users get more than just a canned response through Hangouts — instead they’ll be able to interact with a live person real-time and get their specific questions answered.

Think of Helpouts as a marketplace of advice. Each listing will vary in cost and is determined by the provider. You can either set an appointment or launch a Hangout immediately. After the meeting, each transaction can be paid for through Google Wallet (no other payment service is currently supported), for which Google will take a 20 percent cut.

Although there are more than 1,000 providers listed, they’re not all individuals. Manber says that some can be small-, medium-, and large businesses that have teams assigned to each listing.

It’s worth noting that the 20 percent fee is not applicable to healthcare Helpouts. This particular category is pretty complicated as it includes experts in counseling, nutrition, lactation consulting, psychology, and more. Although Google says that Helpouts is HIPAA compliant, the company is treading this area carefully, even waiving revenue fees as it says that it’s “doing a lot of experiments at launch” and it might wind up being a fixed session pricing structure.

Manber tells us that there is a “Satisfaction Guaranteed” policy so if users are not happy with the assistance they’re provided, they can receive a refund. Helpouts also has a feedback feature where providers can be rated, enabling those deemed the most helpful to surface to the top of the listings. Safety measures are also in place where users can immediately end the video feed if they feel they’re being abused or harassed, in addition to blocking them.

When you’re using Helpouts, it might seem like you’re using Google+ Hangouts, but the company calls it a new product, except that it’s utilizing tidbits of a variety of other services, such as Google+ (to power the identity aspect of the service), Hangouts (to enable the video streaming), and Wallet (for the transaction).

Each of the 1,000-plus providers have been vetted by Google and any additions will be by invite-only. Those in the healthcare space have also been certified by a third-party to ensure that they are legitimate. Partner providers include Sephora, One Medical, Weight Watchers, Red Beacon, Rosetta Stone, and HomeAdvisor.

Although Google hasn’t said anything, from the provider side, it would be interesting to see Google offering additional marketing support and analytics — perhaps tying their expert pages to Google AdWords and Analytics.

Users need to be at least 13 years old to use Helpouts and providers have to be 18 years or older.

Google Helpouts is available on the Web and on phone and tablet devices with Android 4.0.4 or later. No iOS version is planned at this point in time.