We’re hearing many great stories about Project Glass. Most people love the idea and can’t wait to buy one. I’m skeptical, and I find I often have to defend myself when I let people know I’m not so sure about the whole thing.

Saying you are skeptical to someone who tells you wearing Google glasses is going to be awesome triggers the same reaction as telling an iPhone users that the Samsung is a great phone too. In other words, time for a little flame-war in the comments section here.

My thoughts on Project Glass: first of all, it’s vaporware. Announcing stuff two years in advance is just not a cool or smart move and that’s the first thing that ticks me off. It reminds me of the Microsoft Courier, the dreams we had for the Palm Pre and every other product that seemed awesome when they announce it and then turns out to be shit when you can finally buy it, or gets discontinued before you even get a chance to get your hands on it. 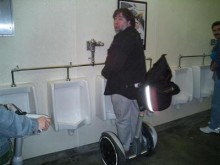 The second, and more important, reason for not believing in Project Glass is the ‘theory vs practice’ element of the glasses. In a way I’m afraid they will suffer the same fate as the Segway. I remember people speculating wildly before the Segway was officially announced. It was either Steve Jobs or Jeff Bezos who said something along the lines of ‘They are going to design cities around this invention’ and when it was finally announced we all agreed, for a while.

Then we first got our hands on one and everything that seemed amazing about it turned out to be awkward in practice. The Segway was too expensive, too heavy to handle and too awkward to be seen on.

When we first heard about the Segway we projected our wishes and dreams upon it and then when we finally met one it disappointed.

Project Glass will suffer from the same issues. The first one you will buy will be too expensive, too heavy and too awkward to be seen with. In fact, I can promise you that if you  wear it casually people will refuse to talk to you. 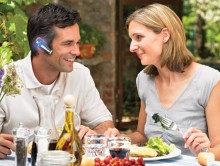 It will be similar to wearing a Bluetooth headset. Remember those? At one point we all wanted one and many of us had one. I’ll admit, a lot of us still have them. But unless you’re a chauffeur I’m guessing you aren’t wearing one in public, right? I certainly hope not.

Now imagine meeting me somewhere and I’m wearing my Google glasses. You’ll start talking and halfway through your sentence I blurt out “Oh, congratulations on your birthday last week!”. That information would have popped-up in my glasses display of course. That’d awkward, right?  You will take a bite from your bagel and I will start laughing. You look at me puzzled and I’ll say “Ha, you had some mayonnaise on your chin so I quickly took a photo and uploaded it to Facebook”. You’ll protest but I will randomly laugh as likes and ‘LOLs’ are posted beneath the embarrassing photo I just took from you.

It will either be the end of our friendship or you will insist I take those glasses off the next time we meet.

Lets assume you don’t use the glasses when other people are around. At the office you’ve got your big screen, maybe an iPhone or iPad or Android tablet around so there wouldn’t be much point. It’d just be confusing and distracting.

In the car or on a bike? Not if you are driving buddy.

On the subway or train? Yeah, that could work, but might as well use your phone or tablet then, right?

In bed with a big screen movie hovering right in front of you? Sure, but not if you are in bed with someone else.

Even if one of those scenarios works for you I’m still guessing that the price of Google Glasses will be too high to just buy it for that moment only.

My conclusion: the socially awkward among us will buy them, use them, and tell us they are great. The rest will look at them wearily and stick to our tablets, phones and laptops.