At the end of last year, Google finally started selling its Asus-manufactured Chromebit dongle, having announced it in March 2015.

In essence, it’s a Chrome OS computer the size of something a little larger than a USB key, and it costs just $85.

However, you can get a PC-on-a-stick experience from either Windows or Ubuntu too, so Chrome OS doesn’t have the market to itself. You can also get the excellent Remix Mini, which runs a modified version of Android for just $70, so competition is tight.

Does the Chromebit offer enough to stand up to this strong competition in the ‘plug-and-play’ space? We spent some time with the diminutive device to find out.

The Chromebit is small and simple; matte plastic and rounder corners make it nicer to look at than a square-edged dongle, and and on the unit there’s just an HDMI connector and room for a single USB.

If you need more than that, you’ll want to use a separate USB hub to extend your options. 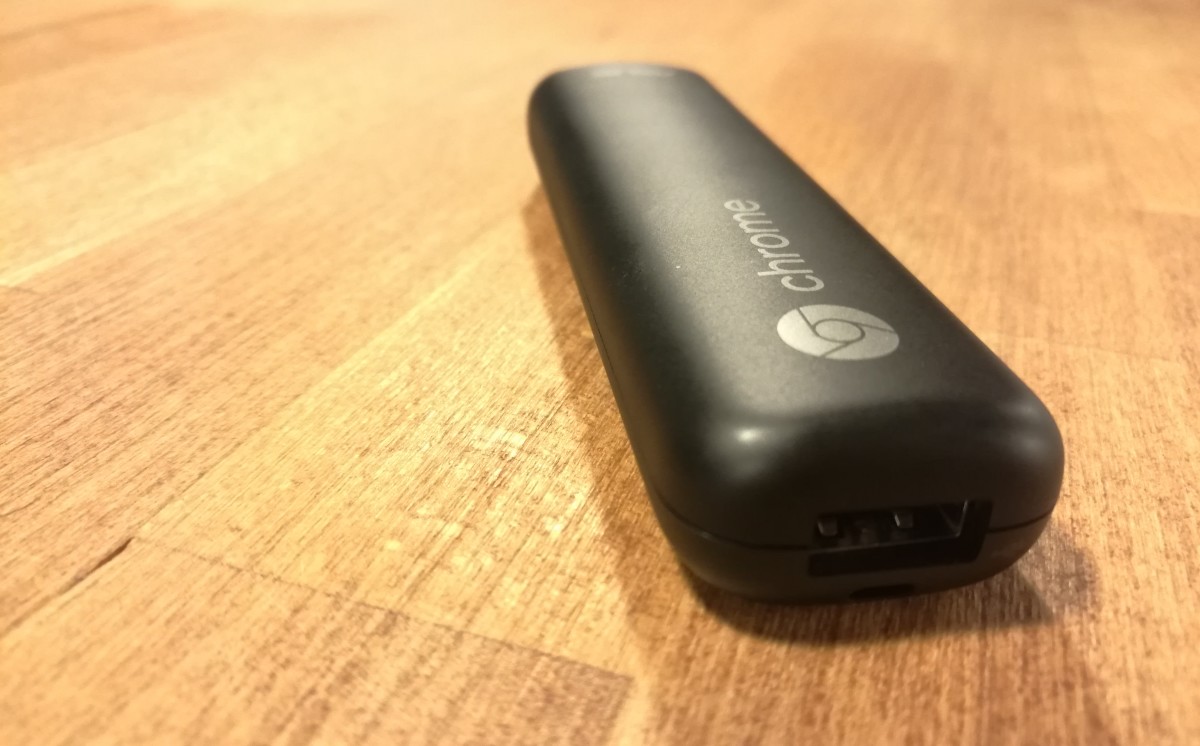 While it’s small and lightweight, it does still require mains power at all times for it to work, so you’ll need an empty plug socket behind your TV or monitor too.

Understandably, to keep costs down, on-board storage is limited to 16GB but Google is clearly hoping you’re the sort of person who’s already adopted its cloud services if you’re considering a Chromebit. There’s no microSD slot, but that’s not massively surprising considering Google would want to push its cloud storage options.

Another cost-cutting measure sees an ARM-based CPU from Chinese manufacturer Rockchip, rather than an Intel Atom low-power processor, as found in some other Chromebooks. 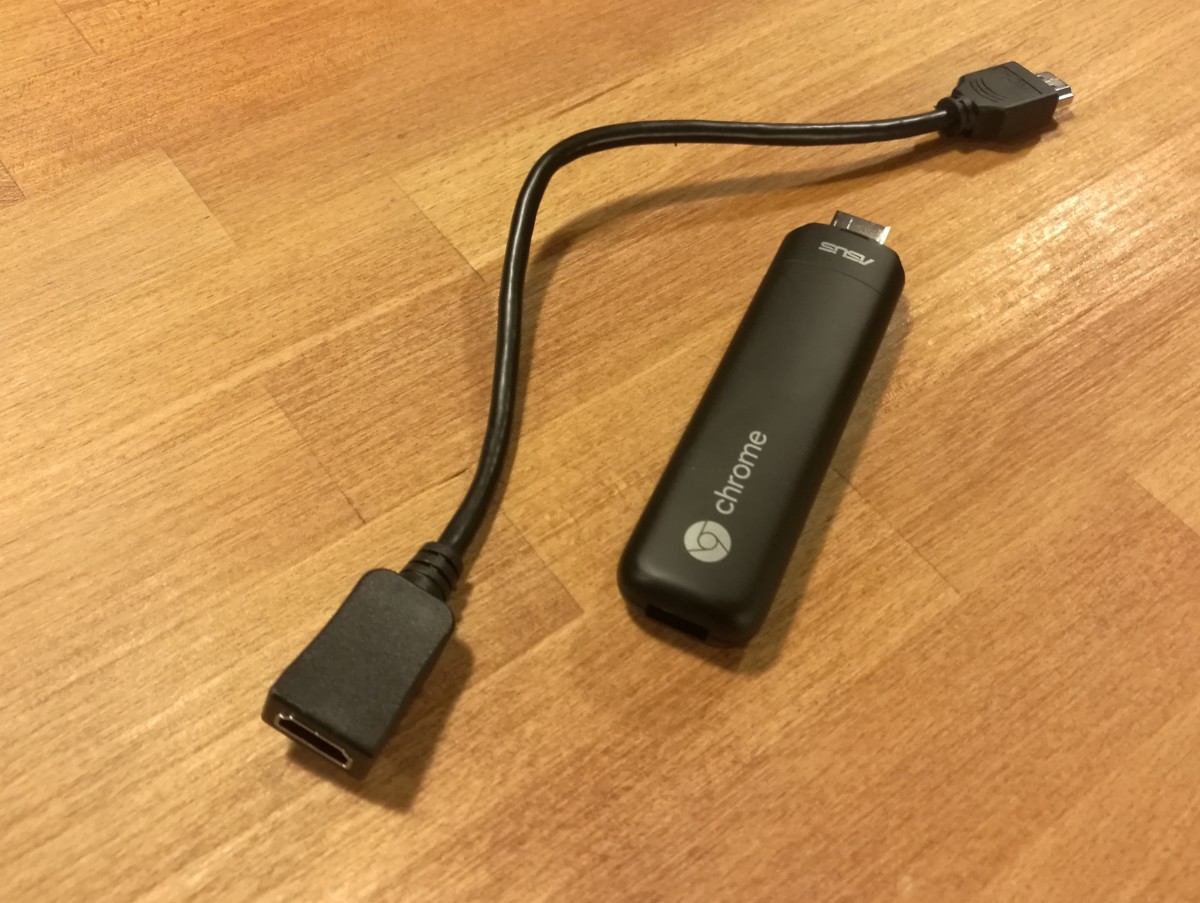 Included in the pack is a 1-foot HDMI extension cable.

Setting up the Chromebit is stupidly simple. Plug in the HDMI, plug in the power cable and switch your monitor or TV to the right output. That’s about it.

Under-the-tiny-bonnet it runs Google’s Chrome OS, which necessitates an internet connection for most of its key features.

As discussed ad naseum, Chrome OS isn’t perfect – with its primary limitation being that requirment for connectivity. Nonetheless, there are now more apps that you can run offline than was previously available, and Google has continued to bring across features that make sense for the platform – like Google Now. 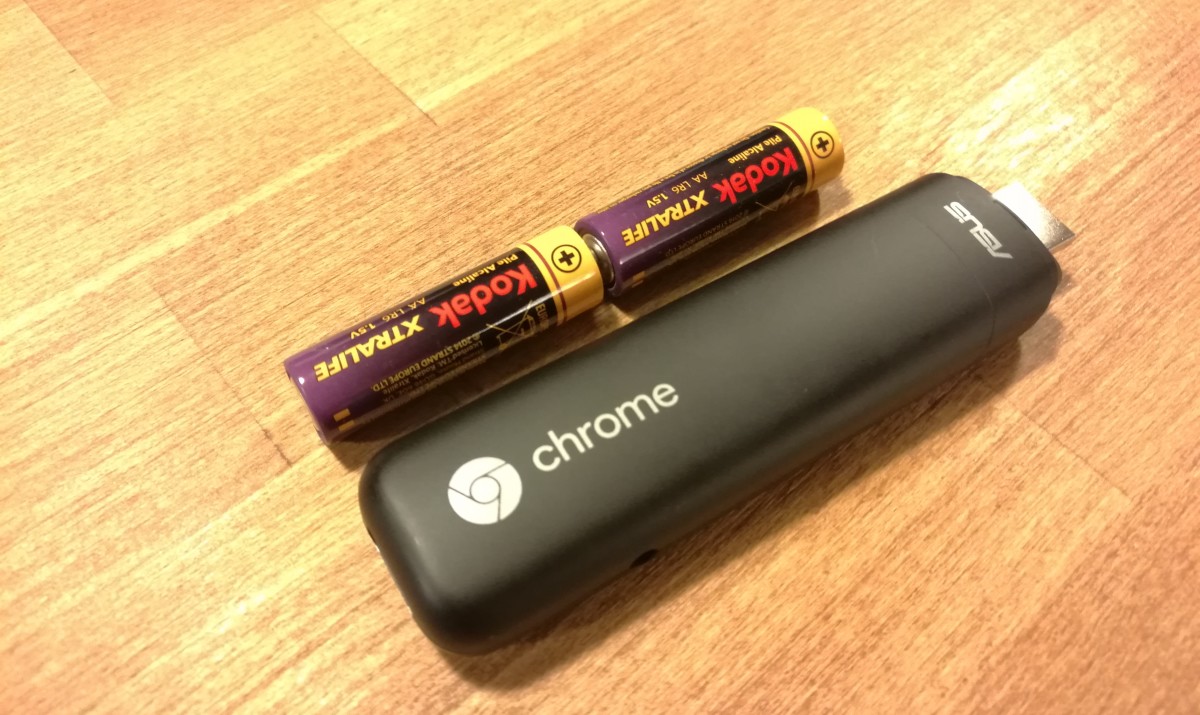 The bad news is that unless you can find every single app you might want in Chrome’s Web Store, then sooner or later you’ll be disappointed or frustrated, or a little of both.

As it’s Chrome OS, rather than Android, there’s no support for apps or games from the Play store – and there won’t be unless Google brings its two operating systems together.

On one hand, that’s the device’s strength – it lets you plug-in and get going without having to learn anything at all. On the flip side, it renders it a limited experience if you were hoping it would be a ‘true’ laptop alternative.

I had intended to write this review using nothing but the Chromebit, but had to abandon that plan after the third time my screen went black and the unit reset itself – purportedly due to a lack of available memory.

On a deadline, you don’t have time for this sort of problem arising repeatedly, even if you had the patience for it.

With just 2GB of RAM, this kind of performance isn’t surprising, but I wasn’t even doing very much at the time. I only had about 10 tabs (none of which were streaming video or music) open across about three Chrome windows. I expected it to stand up to a little more than that, to be honest.

Instantaneous isn’t a word that springs to mind for the Chromebit. It can take care of most of your browsing needs, and if you want to check out Netflix on the big screen (even in HD), then that should work fine too – after a small delay in opening.

Should I buy one?

The Chromebit is cheap, small and easy to use. On the face of it, that should be a compelling argument.

However, it ships without any of the peripherals you’d need if you were considering this a replacement for your desktop or laptop. And if you want to take it around with you for use outside the home, you’ll also need those items waiting at your destination.

It’s also Chrome OS, rather than Android, which means it didn’t offer some of the apps I’d need to use it as an occasional desktop replacement.

It also fails to convince me that it’s the best way to use a Chrome browser on your TV. If you wanted a cheap way to do that (and more) then you’d probably own a Chromecast already.

If the Chromebit was the only way to get Android or Chrome OS onto a big screen, then there would be no problems, but ultimately I’d rather have a Chromecast or Remix Mini plugged into my TV.

It is cheap, though.

[Update January, 29: This article was updated to reflect the fact that there is no microSD expansion available on the final retail model.]