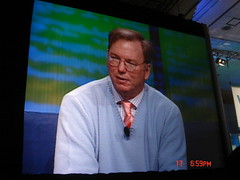 According to Dow Jones Newswires, Google Chief Executive Eric Schmidt said on Thursday he would be happy to pursue an advertising deal with Twitter.

Having previously dismissed Twitter as a “poor man’s email” system, Schmidt seemed to shift course during a call with analysts:

He said the question was how a real-time update service could make money, adding that a logical strategy would be to “hang advertising products, whether it’s a text ad or video ad, off of it.”

“I don’t know personally their strategy, but it strikes me that’s a logical strategy for them to pursue and something we would be happy to pursue.”