This article was published on September 29, 2014

Google is developing a new portfolio of display ad formats and tools for advertisers to use across its Google Display Network, AdMob network and DoubleClick services. The company says they’re designed specifically for mobile and will be released over the coming months. 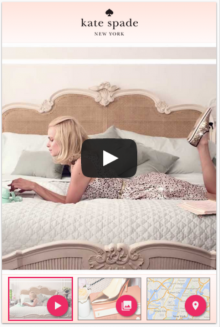 Engagement ads leverage advertisers’ existing brand assets and repackage them into rich, media-centric HTML5 ads. One example that Google gave includes two states: a small “invitation” banner with a glimpse at the hidden media, followed by an “expanded” state (shown left) that includes a small carousel for switching between a related video, a map and an image gallery.

TrueView ads, meanwhile, will soon cover the entire AdMob network. This format is already live in gaming apps, but Google says it will be available for all app types in the coming months. In short, it features a small video inside the app that viewers can choose to skip. “Plus, you only pay when a user chooses not to skip your ad,” Google explains.

Anchor ads, as the name suggests, is an ad format that will stay locked to the bottom of the screen. As a user swipes up and down a page, the mobile web ad unit will remain present until they manually dismiss it.

Finally, the magazine style text ad format, which was previously available for mobile websites, will be extended as an in-app format for the AdMob network. They’re supposed to look like premium ads found in glossy magazines, increasing engagement and reducing user frustration. Text ads from the Google Display Network will automatically be eligible for this expanded ad format.

To coincide with its new ad experiences, Google announced a series of tools to help advertisers target their mobile ads at a variety of screen sizes. These include an auto-resizing tool for the Google Display Network and a Flash-to-HTML5 conversion tool for both the Google Display Network and DoubleClick Campaign Manager, which will show a HMTL5 version of an add for any smartphone, tablet or browser that doesn’t support Flash.

Lastly, Google has added 29 HTML5 and in-app formats to its DoubleClick Studio Layouts, reducing the time it takes for advertisers to actually build mobile ads.