At its annual developer-focused I/O conference in California today, Google lifted the lid on a new testing service for Android app developers.

The idea is that once you’ve already issued a successful, money-making app, you may want to trial new features within the app before launching it fully to the public. This is standard practice, but it can be a difficult process to implement. Now, within the developer console, there’s three tabs – one for alpha testing, beta testing and product. 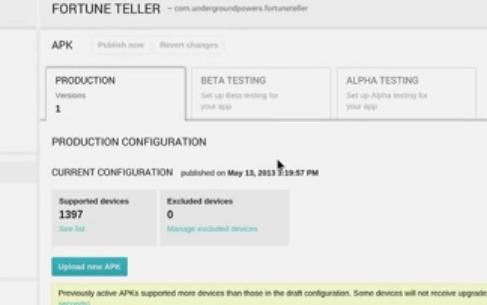 Through the Google Play Developer Console, developers can select a small test group from Google Groups and Google+ to alpha test the new app update, with subsequent feedback posted back to the developer rather than on Google Play, of course. The app is then escalated through beta and finally onto launch.

When it’s time to push a production version of the app out, developers can select a percentage of users who will receive the update, and increase it from, say, 10% to 100% over time when they iron out any bugs.

This is sure to prove a popular feature with Android developers, as it makes it much easier for them to test, iterate and launch without worrying about shipping something that’s not quite ready. It’s something that iOS developers will surely be jealous of.

This announcement was made as part of a series of Google Play Developer Console updates today, which included tips on how to optimize apps, an integrated app translation service, usage metrics and referral tracking, and, of course, beta testing with staged rollouts. Earlier, Google announced 900 million Android activations to date, culminating in 48 billion app downloads.

Meanwhile, you can follow all our coverage from Google I/O here.