The Windows of Opportunity (WOO) Project is a collaboration between General Motors and the FUTURE LAB at the Bezalel Academy of Art and Design in Israel. Its goal is to conceptualize new ways for rear-seat passengers, especially children, to have a richer experience on the road.

According to World Car Fans, the WOO project was “inspired by psychological studies indicating that car passengers often feel disconnected from their environment. GM asked the Bezalel students to turn car windows into interactive displays capable of stimulating awareness, nurturing curiosity and encouraging a stronger connection with the world outside the vehicle.”

Traditionally, the use of interactive displays in cars has been limited to the driver and front passenger, but we see an opportunity to provide a technology interface designed specifically for rear seat passengers. Advanced windows that are capable of responding to vehicle speed and location could augment real world views with interactive enhancements to provide entertainment and educational value. 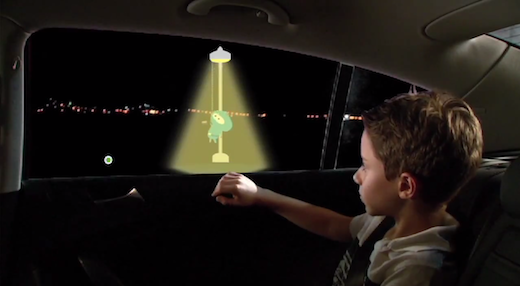 As you’ll see in the video, the concept definitely looks like a captivating experience, even though the actual act of rotating your body towards the window for a long period of time sounds pretty uncomfortable (I’d also get car sick, I’m sure). Video commenters also pointed out how silly someone would look continuously pressing against their window at invisible objects. 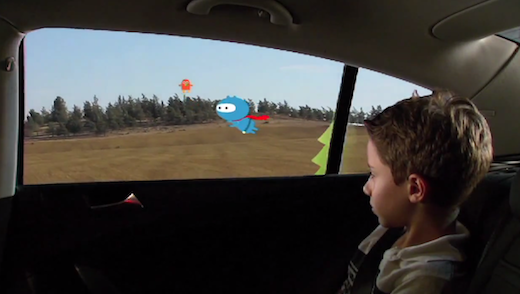 A display that reacts directly to an ever-changing scenery could become a brand new medium for gaming and entertainment in ways that a tablet could never provide. I can imagine a side scroller built into an endless row of trees on a long country road, or even a game that alters the appearance of passing vehicles in an urban setting. Clearly, there’s a lot of unrealized potential, which is why conceptual experiments like these are so important.

You can check out the full video below. Here’s to the future, we’re right on its heels: