GeoTagr‘s mission is simple – it wants to make geo-tagging photos taken with any camera a cinch.

The $4.99 (£2.99) iOS app records your location during a photoshoot, and geo-tags your snaps retrospectively, supporting a variety of photo storage platforms, including iPad, Mac, Dropbox, Flickr, Google+ and SmugMug.

This app is particularly aimed at those who take a lot of photos, as it can be difficult recalling where an image was captured.

Tapping the power of GPS, GeoTagr supports more than 5,000 types of digital cameras, enabling the user to record their location with an iPhone, iPad or iPod touch, while taking photos with a separate digital camera. 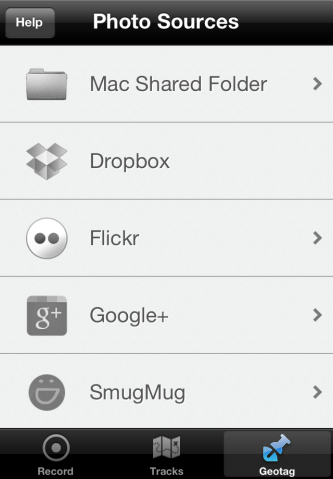 On the iPhone, you’ll see a tab at the bottom of the app for each part. On the version for iPad, location recording and track management is pulled together on the same screen.

For the app to effectively geo-tag your photos taken on another camera, you’ll have to sync the times on your digital camera with your iOS device, preferably to the very second. You’re best double-checking that each device is set to the same time-zone too.

When you have finished ‘recording’ your movements on the app, you will be able to view a list of all your tracks (e.g., one track for each location you ‘shot’ at), and you can rename, delete or export them. You’ll then need to load the photos from your camera into a shared folder, say, on your Mac or public Dropbox folder, and connect GeoTagr with that folder by hitting the ‘Geotag’ tab.

After a few moments, GeoTagr will notify you how many images it has detected for geo-tagging. And then, if you check 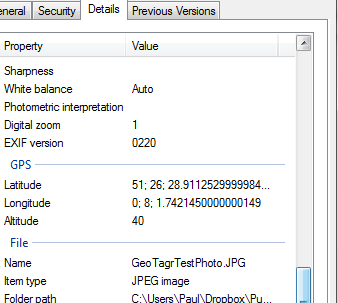 the properties of each snap, you’ll note that GPS coordinates have been added.

There are a number of potential use-cases for such a feature. Adobe Lightroom recently integrated a maps feature which support GPS data.

This feature can position photos on a map, for example based on embedded GPS data, which then enables pop-up slideshow views of photos taken in a particular location.

GeoTagr works with GPS, which is the most accurate means of recording your location. But WiFi will also work, and will typically result in less battery drainage.

The app can also use cell tower data to establish your position if GPS or WiFi isn’t an option.

GeoTagr is the handiwork of Belgium-based Chris Cornelis, founder of photo-centric app developers Galarina. And all in all, we must say that GeoTagr is a neat little app that will appeal to amateur and professional photographers alike.