Activism is important. In some cases it’s the only way to change things and move people in the right direction. In the past, we’ve seen how movements like STOP SOPA can affect decisions and how people from around the globe can join forces to ensure the greater good.

Although petitions and campaigning can sometimes work, as geeks we need to find more effective ways to inspire people and help them act against the problems of our society. There is a new kind of activism and we call it geektivism (add it to your vocabulary, it’s going to be huge!).

Geektivism is what geeks do when they are fed up with the current status of their environment. Drawing from their resources, they find ways to tackle problems in a creative and engaging way (of course this usually involves games…).

In our search for geektivists, we came across five new projects that can really make a difference. Both trying to solve important problems, they turned to gaming and technology to inspire people and help them do something, rather than just complain or click on a form.

The problem as stated on the game’s site:

“Every year, California struggles to keep its 278 state parks open. In fact, due to proposed budget cuts, the state might close 70 of them… which is a huge bummer!!” 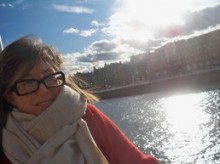 Geek game designer Jenny Gottstein took it on herself to save the parks using her geeky superpowers. When I talked to her about why she’s doing this she told me about her Grandma who had brought the problem to her attention. Coming from a tiny goldrush town called Volcano (population 100 and the coolest name ever) she was worried that if their Chaw’se Indian Grinding Rock state park ever closed it would have a major impact on their small town. Further inspired by an archiving project of family photos taken over the last 90 years (many of which were taken in parks), Jenny created something that makes a difference.

The outcome is The Go Game Road Trip: an online mobile app that works on every platform to help you build a new adventure for your journey. Once you start the adventure you have a list of tasks that you need to fulfill and gather points. Armed with your mobile and a few good friends this can be the perfect day off at a nice Californian park.

Although progress has been made and some parks have been spared, Jenny and her team are still fighting to get the word out. If you are based in California, load the game, visit the parks, have fun and message your state representatives to find a solution (the bill AB1589 needs to be passed by 30th June so time is of the essence!). These geeks need your help and they’ve found a way for you to have fun in the process.

The problem as stated by one of the founders of the game:

“We are on a mission to help kids be more active physically.”

The TreesureGame intrigued me so I spoke with one of the founders, Ville Kormilainen, to find out how they are trying to solve the problem. My first question is always “Why are you doing this?”. It turns out that both founders of Treesure Ltd have kids and have been watching how their kids are activated by new technology but not ever physically motivated. Add this to the rising threat of obesity in Europe and you have a serious problem. Since they have a story-telling background (they’re both journalists), they knew that a story element was needed to help engage children and get them outside. Using mobile phones, GPS technology and stories they created the TreesureGame.

The game gets the whole family outside to have fun. Once outside you can pick a story, plan a route and while you’re doing the route interesting tasks and activities come up. After completing all your tasks and finishing the route, the kid is rewarded by the game. The best part of it is that it actually works!

Ville pointed me to a story from his creative director. One night, despite the insane Finnish weather (-15o C!!!) his 7 year old son wanted to try out the game. They quickly put on their protective clothing and went outside to try a new adventure. After 30 minutes, 1.5 kilometres and completing tasks like “Walk as slowly as possible”, they went back home. Not only did they have fun and exercise, his kid even asked if they could take the other direction of the route next time.

The team has even moved a step further and will be introducing the game in an amusement park in Helsinki with stories and bonus tasks at every game. If you have young kids and an iPhone then you need to give this game a try.

War on Terror and Crunch

War on Terror and Crunch are the two old-school games we came across dealing with social issues. The first was a board game having to do with terrorism and the second, a card game dealing with our banking system. I caught up with one of the founders, Andy Sheerin, to find out what the games bring to the table and why they started working on them.

Andy, Andy and Tom (the founders) joined forces to create games that are closer to more traditional activism topics and founded Terrorbull Games. The initial idea came while the two Andys where watching the invasion of Iraq on the news back in 2003. This gave them the push to look at how these actions can be explained and maybe experienced through gameplay. After a lot of work and trial War on Terror was born.

What really surprised them is what they observed during the user trials. Even though players were entering the game from a level playing field, while playing they were transforming by assuming a persona and disassociating from their values. When the time came to make a nasty decision they could blame it on the other character for a suspicion of having nuclear weapons. Over and over, they have observed how the players mimic our political systems and make decisions very similar to our history.

Their second game, Crunch, does to the banking system what War on Terror does to the political system. Through the game they have found a way to show people how the system works and how certain actions are not viable in the long term. Players even get a chance to experience the collapse of capitalism.

A small sample of the Crunch cards

These games might not fix our current problems, but they can help us understand what caused them and how we can act in the future. They are fun, satirical and can provide our friends and family a good time while teaching us important lessons.

Before I go into how Alleyoop is solving our society’s problems I’ll pause and mention a point that Gerard LaFond, their VP of Marketing, made during a chat we had. In the 80s, 90s and even 00s, when you wanted people to pay attention and change behaviour you had to use media that they were used to. A controversial film, a progressive song, an engaging ad, were all ways to make people act in a certain way and think differently. Now, that we are dealing with our geek generation, in which video games are their media, we need to act accordingly and use them as a way to change behaviours and drive action.

Alleyoop is doing this by gamifying education. The company’s initial focus is in math and trying to pick up where the school system is leaving off. By gamifying the experience, the company is able to provide affordable tuition and games that can further children’s knowledge. The beauty of this system is that it’s flexible and adaptable to the person’s needs and way of learning. It uses one-on-one tutoring, whiteboard sessions, recorded lessons and of course games. Having a freemium model also allows users to start learning immediately and only get more services when they really need to.

Starting with Alleyoop is a breeze

Along with other initiatives, this is a great start to fixing our education problems. By not giving just a pass mark but focusing on an understanding of all the important concepts, children have a better chance at succeeding in the future. If you know someone that needs help in math, tell them to give Alleyoop a try.

Tuition fees around the world are sky-rocketing. To a point that people have started questioning if getting a degree is worth debt for most of their adult life. Even in Europe where education has been heavily subsidised, we see a rise and introduction of fees. In the UK, next year will see an increase of at least 80% for university fees, which has had a severe effect on applications. That’s where Grantoo comes in.

What they do is really simple. They get companies to sponsor tournaments that have tuition fee grants as prizes. These tournaments feature games like quizzes, word games and even Texas Hold’em, and give students a chance to get a grant while doing what they already enjoy doing. The games are also educational, so it’s a win-win-win scenario.

A tuition grant for playing a word game? Who can say no

Grantoo has a second benefit. Every winner has a chance to donate a portion of their winnings to their favourite charity. What really surprised the founders (Dimitri and Mikhael) was that even though they advise a 10% donation, their average donation to charity is a whopping 35%!

The above games and initiatives are just the beginning. There are so many problems to be solved and geeks need to use their superpowers to make an impact. My personal quest is to educate kids about what goes on inside a computer (it turns out that they don’t know), what’s yours?