Black-rimmed square glasses, printed t-shirts, utility trousers, short sleeve shirts with a pocket and strange techy accessories used to be the essential items in a geek’s wardrobe. Wearing these made you stand out and probably made you a bit less popular than the other kids at school. But in past few years something has changed. Look around you and you’ll see people wearing big black-rimmed glasses, t-shirts with geek in-jokes and even women wearing fitted utility pants. What’s going on?

To understand this we need to take a quick trip down memory lane. In the 80s and 90s a new stereotype was created. Thanks to movies like “Revenge of the Nerds” people created a certain image about what folks that are into science and technology should look like. Ill-fitted clothes, shirts, black-rim square glasses and a lack of social skills meant that you were a nerd. Being a nerd then was not something you really wanted to be called, as it usually ended with being bullied by the “popular” kids and being invisible to everyone else. Back then mainstream fashion paid no attention to geek culture and geek movies were rare. I remember discovering my favourite movie, WarGames, when I was a kid and I still can’t find people that have seen it or like it. 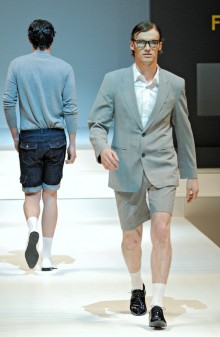 During the following decades we saw a huge shift in people’s behaviours. When I was growing up in the 80s, computers were expensive and required skill. Most people that owned one were also geeks and interested in programming or at least games. During the 90s, computing started invading all parts of our lives and by the time we entered the new millenia we all considered mobile phones a necessity and computers became part of our everyday lives. Culture started changing. More and more people were playing electronic games and becoming interested in what was originally geek and nerd territory.

Pop culture and especially movies had an incredible impact on the change of our culture. People that had never read Lord of the Rings queued to catch a screening. The Matrix created a sensation that a few years back would have only been noticed by geeks. Spiderman 3 (a Marvel Comics hero) for years held the top position on the opening weekends chart only to be outranked by The Dark Night (a DC Comics hero) and the last film of Harry Potter. Add to that popular TV shows (Big Bang Theory anyone?), the Star Wars franchise and geek living is starting to seem a lot more fun. People that used to make fun of our AD&D group would now devour any Lord of the Rings content and probably take part once they understood the concept behind the game.

In the past decade things have become even geekier. Day by day more people are getting online and technology that used to be science fiction is now part of our daily routines. People from every age group and walk of life now have the tools and skills that only a few years ago would put them in the geekosphere. There has also been a huge change in the people we look up to and admire. The bankers of the past decade and the magnates of the one before, have been replaced by geeks like Jobs, Gates and Zuckerberg. Success and geekiness appear to go hand in hand and have become mainstream.

This brings us to its affect on fashion. In the past few years we saw people borrowing elements of our geek style and adapting it to their own. The black-rimmed glasses, one element that has always been characterised as geeky and nerdy, is now part of the wardrobe of celebrities, emos and hipsters. With the shift of our culture people started seeing the value of our geek jokes and the utility of our clothes. Fashion saw the shift and by making geek fashion even more stylish they created the Geek Chic look. Do a search for Geek Chic and you will even find how-to articles on adopting Geek Chic style and what essential items you need.

A few years ago you could only get geeky t-shirts from ThinkGeek, now I have even seen a ctrl+alt+del t-shirt at high street fashion stores. Geeky accessories have also filled the shops and people’s wardrobes. Cool belt buckles, bow ties, binary watches, suspenders, stuff made from circuit boards and even jewellery made from computer parts can be found at market stalls and worn by geeks and non-geeks alike.

Where there is demand there is also opportunity and some brands have taken the Geek Chic style completely on board. Blackmilk Clothing (the creators of the Retro Gamer Leggings that Boris, Courtney and Hermione rocked on the TNW Conference stage) has more than 5 fabrics that are completely geeky. They include Tetris pieces, circuit boards and even galaxies. They do fashion, they do it with style and they are geeky. New York City eyeware startup Warby Parker has so many geeky frames in their collection that I lost count. People want geeky glasses and they can now find them in every eyewear store. Or go to Threadless and devour all the geeky t-shirts that are now available to the mainstream consumers.

With technology infiltrating every part of our lives people are getting geekier every day. We have reached a point that geek culture is not just a small group of people but becoming one of our main cultures. I’ve even read an article from Lars Konzack where geek culture is compared to the hippie culture in the 70s and I think he’s right. As he puts it “The geeks are the third counterculture, rejecting both the values of the hippies and the yuppies, demanding focus on fields of interest and introvert activities rather than extrovert performances.” Moving forward the line between geeky and mainstream will continuously become thinner and blurrier. I don’t know if it’s a good thing but I kinda like it…