WCIT is the signature event of the World Information Technology & Services Alliance. This year it was Armenia’s turn to be at the center of the IT world map. The consortium of ICT associations from 83 countries claims to represent 90% of the industry. Technologists, entrepreneurs, and big thinkers in tech arrived in Yerevan to explore the power of decentralization the effects of technology in our lives.

However, this tech conference had something different up its sleeve. An eclectic mix of guests such as Kim Kardashian, Reddit co-founder Alexis Ohanian, Giphy founder Alex Chung, and former System of a Down frontman Serj Tankian gathered inside Armenia’s largest venue. But, it was Gary Vaynerchuck that I was able to sit down with and explore his thoughts on the digital Landscape.

Vaynerchuk passionately understands how people have a desire to do multiple things at once. We are multitasking at a level that we’ve never seen before. Many of us are now listening to a podcast, watching TV, and working on our smartphones. He told me how he firmly believes that our capacity to do more is far higher than most people realize.

Vaynerchuk told me for these reasons alone, “Joe Rogan is going to eventually sign a $100 million-plus deal to go exclusive on a platform because of the level of attention he has.” Rather than just consuming podcasts, maybe it’s time to take creating audio content such as podcasts seriously too.

Why we need to pay more attention to our history

There are endless examples of businesses that have steadily got further and further behind the digital curve. Despite readily admitting he was a terrible student, Vaynerchuk is quick to highlight how his love of history plays a big part in his success.

Looking back throughout history helps us see that everything we are experiencing has happened before. Factories turned to machinery to increase productivity and farmers turned to tractors, it’s nobodies fault it’s just progress.

However, here in 2019, it seems to be easier to demonize technology than take responsibility for our own actions. “People used to not have traffic lights, and somebody used to get paid to help you get through intersections.”

“Does everybody cry when they get to the airport, and they go through a machine now, not somebody who checks your passport? No, they’re happy, because they don’t want to wait 15 minutes.” Gary went on to say that if you only care when your own job is in jeopardy, it makes you a hypocrite.

“If you’re a 28-year-old truck driver, and you know that autonomous vehicles will be arriving in 20 years when you will be 48 years old. Is it an autonomous truck’s fault? Or is it your fault for not creating a new skill and getting a new job?”

As we enter the fourth industrial revolution and head towards web 3.0, maybe it’s time to admit that it’s nobodies fault and focus on accountability rather than blaming technology for everything. 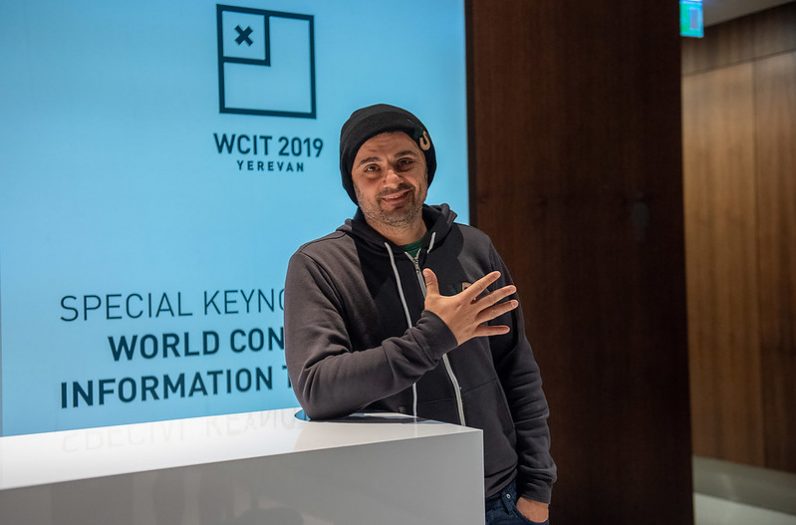 An online land of opportunity

Bad news sells and generates more traffic for websites that are desperately trying to keep their advertisers happy. It can be difficult to see opportunities when your newsfeeds and timelines are bombarding you with scary stories painting a dystopian future after the rise of the machines.

However, when others see a crisis, maybe we should look for hidden opportunities. Vaynerchuk told me how he believes that we’ve never lived in a time where if you love sneakers, that you can build a $200,000 a year business around talking about sneakers. He also added, “People didn’t believe me ten years ago. People may think it’s hard today, but they believe it can be done.”

After investing in Facebook, Twitter, and Snapchat early on, Gary Vaynerchuk has a reputation for spotting a platform’s potential before most of us have hit the create account button. Now that the regulators have Facebook in their sights, I asked him if he was still a fan of the social media behemoth.

Vaynerchuk advised that he is only a fan of Facebook when it’s the most underpriced potential. But he is less a fan if he’s trying to reach those age 40 and under. For that, he’s much more of a fan of Instagram, and if 15-year-olds are your target audience, then he would opt for TikTok.

The message was clear. Gary Vaynerchuk follows attention and doesn’t fall in love with any platform. The only things that matter are how and where people are consuming content today.

It’s time to get serious about esports

The next LeBron James or Tom Brady might not be a sports star in the traditional sense. Kids are now looking up to guys like Tyler “Ninja” Blevins and his gaming streams on Twitch. This is just one example of how esports is continuing to take the world by storm, and the audience figures don’t lie.

When I asked Vaynerchuk why he chose to invest in esports, he told me how the market has matured and much more organized now. “It’s less of the Wild Wild West. I saw an opportunity to invest in a franchise with NFL owners in a very established market.”

Gary Vaynerchuk has his fair share of critics and is very aware of why some people may think that he doesn’t bring value. But he argues that his substance has been very historically correct and it’s the way that he’s creating awareness that really matters.

“I’m sure that every business would like to figure out how to never come to Armenia in their lives and when they come here, many, many, many people want to talk to them. That’s called a building brand. Every business and organization can learn from that.”

Armenia showed the world that it could talk tech and put on a show just as impactful than anything Silicon Valley has to offer. After securing some of the biggest names in tech and entertainment, every individual and business should learn to follow their own path and silence their own critics too.

Whether you see crisis or opportunity on the horizon will depend entirely on your mindset. So which will you adopt and be accountable for?