Online venture capital firm FundersClub has launched a new feature geared towards recognizing its most active investors and entrepreneurs in a bid to keep itself competitive against the likes of AngelList. With FundersClub Venture Point system, members are awarded points for “knowledge sharing and value creation”. In essence, one could think about this as a evangelism program.

As FundersClub explains, members receive points and achievement badges simply by helping grow the community. The individuals with the most Venture Points are displayed on the company’s website. How the scores are tabulated is based on three specific categories: connectors, value-add, and ambassadorship.

With the first category, connectors, FundersClub will award Venture Points to those who refer startups and companies its service, thereby helping the community source deals. But it’s not all about bringing in new businesses — rather, it’s about becoming stewards and helping startups grow and mature. That’s why points will also be granted to those who go above and beyond their financial obligation to portfolio companies. Lastly, referring other investors to FundersClub is another way to accumulate points. 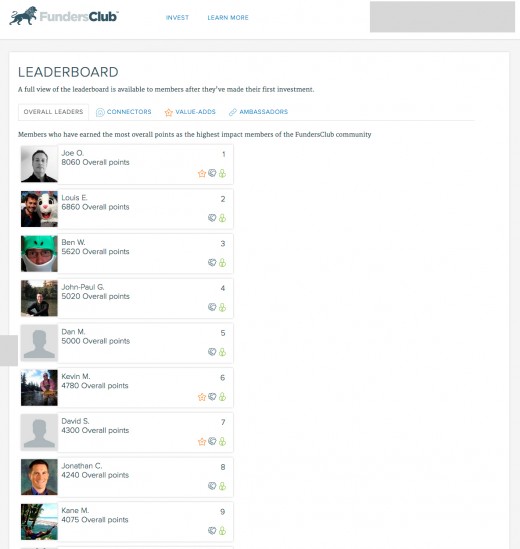 What exactly do members get from their points is not really known — at this point it could be just about bringing out the competitive nature of investors and founders.

FundersClub co-founder and CEO Alex Mittal said that this new program is aimed at converting “the potential energy of our network into a powerful wave of kinetic energy.” The company is no longer about passive recruitment — it wants to not only help startups grow, but itself as well.

And with the ability to crowdfund legally, thanks to the passage of the JOBS Act, FundersClub is looking to jumpstart their marketing opportunities and gain some momentum.

Its competitor, AngelList, has already darted out of the gate, seeing $1 million invested in the first day after general solicitation was permitted. It also recently made it possible for syndicates to be formed to pool resources to help fund startups.

Started in 2012 by Mittal and Boris Silver, FundersClub has set its mind on accomplishing one goal: changing the way the world fundraises and invests. Today, its network has more than 7,300 members, of which 35 percent are C-Level executives, directors, vice-presidents, presidents, and above.