Given a whole twenty minutes to prepare his wildcard pitch at The Next Web’s conference ten days ago, Brouns did a stellar job of composing himself to win over the panel of judges and collect the ‘Most Remarkable Presentation’ award at the TNW Startup Rally.

Ten days on from this 5-minute impromptu pitch, we caught up with Brouns again to delve a little deeper into Frommees, and see what it’s really all about.

So…what exactly is a Frommee?

I’m not quite sure whether this ingeniously simple concept could be big, or whether it’s destined to go the way of the dodo before it’s even gotten off the ground. It is a neat idea though, and it’s certainly worth exploring further.

But what, exactly, is a Frommee? There’s a clue in its name – ‘from’ and ‘me’. In the simplest possible terms, a Frommee is a physical keepsake of digital content. It is a token with a unique code printed on its back, and once you enter this at Frommees.com (post-registration), you’re asked to add something you like to the Frommee. This could be a YouTube video, picture…or any kind of digital content.

After this you pass your Frommee to a friend, or leave it somewhere to be found by a stranger. “Once registered, you can always return to the world of Frommees,” says Broun. “It’s a place that is filled with travel information about your Frommees like the connections and treasures it collected on its journey.”

Armed with a Frommee, you enter the 9-digit code on the back of it into Frommees.com.

If the Frommee is fresh and unregistered, you’ll be told so and then invited to attribute content to the little plastic disc. You’ll need to give it a name, and a message:

There is also a section in your account called ‘More From Me’, where you can add things like Twitter and Flickr streams, or integrate blog updates, meaning that Frommees can act as a sort of convoluted business card to dish out to curious strangers at events.

The potential use cases for Frommees are plentiful. You can hand them out when courting someone you like, or leave them in public places for people you don’t know to pick up. However, it’s clear that these could be used by brands to market new services or products…they could perhaps be given away in cereal boxes or through other marketing channels.

“Another section we are extremely proud of and building at the moment is ‘From me to the world’, adds Brouns. “This is a place where we give our users real money that they can donate to charity of their liking. This money, of course, comes from the company whose brand, logo or campaign is associated with the Frommee.”

In terms of getting hold of a Frommee, the idea for now is that companies will order them in bulk to hand out content on, or the startup will hand out starter kits to those that request them.

Founded in the Netherlands in the winter of 2011, Brouns says the company saw about 3,000 Frommees travel from person to person within four days of launch. “At the moment about 20,000 Frommees are traveling, with some going as far as Switzerland,” he says. “Kids and young adults went nuts for Frommees, they liked the fact that they could find and spread something that has traveled far and holds secret content on it that they could unlock.”

How did they get the good word out though, given that you can’t just walk into a store and buy Frommees? Brouns explains:

“In December 2011, there was a big charity event in Leiden, called 3FM Serious Request. We thought it would be cool to have a preliminary open beta launch. So we invited people into our office, which we’d rebuilt to hold a midget-golf track.

In exchange for money people could play the Frommee-themed course, afterwards they could register a special themed Serious Request Frommee. In the course of 5 days we had 3,000 people entering our office and most of them went home with a handful of Frommees and a smile on their face. We raised more than €3,400 for the Red Cross. It showed us that Frommees had the potential to really help charity.”

I asked the 28-years-old Frommees founder what the inspiration behind the idea was, and it seems it has been brewing within him since long before the World Wide Web.

“With Frommees, I am following a dream or a wish I had as a child,” says Brouns. “It all started when I was six years old. I really wanted to have the Lego Monorail, so my mother thought it would be a good idea to let me empty my piggybank, and head to the toy store. The money I paid the cashier with, I had gotten every week from my grandmother, so strangely enough I had formed a bond with this money and found it somewhat hard to give it to a stranger. My eagerness for the Lego bricks won out though, but not before my mother had convinced me that the money would be safe and would start to travel again and make other people happy. I thought about the idea that my money made other people happy a lot and would have loved to meet this people and see what cool things they did with “my” money.”

As Brouns grew older, this fantasy never really vanished, and when he was in his early twenties, he founded a small media company. “I came into contact with all kind of brands, and I noticed that most of their Web efforts actually went unnoticed by their target audience,” continued Brouns. “At first I thought it was a lack of interest in the products, but when I thought about it a little bit more, it occurred to me that the audience wasn’t unwilling to engage with a certain brand, it was the fact that they didn’t come into contact with it at all.”

So whilst banner ads and such like do guide some Internet-users to a certain website, Brouns says that most people ignore them completely. “What this world needed was something you could physically hold and would direct you to all these great Web initiatives,” he says. “I wanted something that I could hold in my hand that would symbolize the Internet.”

It has taken Brouns the best part of four years to get Frommees to where it is now, and he has been combining everything that he loves about the Internet in the years leading to today. ” The launch at the Next Web 2012 was really strange, because it was the first time the global potential of Frommees was fulfilled by an eager international crowd,” he says. 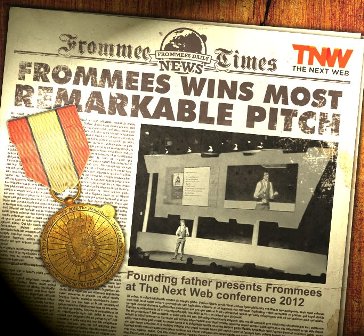 Frommees is headquartered in Leiden, the Netherlands, and currently has six employees, “…but with all the requests and great feedback we are getting now, I think this number will be growing,” says Brouns.

Thus far, they have largely been working during weeknights and weekends, as they have had no external funding. “All the money I have earned making movies and e-learning modules, I’ve  invested in Frommees, ” he continues. Though it’s worth noting that they switched to full-time upon launching at the TNW conference.

Frommees is still in beta, and Brouns says that they’re looking to work on things quite a bit to get things up to standard.

“The site you are seeing now only represents 25% of the final design,” he says. “So we need some time to make it bigger and tweak it. We started to look for an outside app developer. The next thing we need to do is find companies and brands that like to have a big social or charity presence and who like to try out new ways of social media branding.

“But probably most important of all is we need to have our Frommees on the street and that’s why we turn to our users to ask them to spread them,” he continues. “For as long as we can afford it, we will also send starter kits to everyone who wants to get started with Frommees.”