It’s Sunday today…this means there has been a whole six days of media news to catch up on. What do you do…take to your RSS feeds and Twitter streams in search for all the tidbits you missed? Or read on here to see a selection of the week’s most notable newsworthy nuggets? We think you know the answer…

News and social media are becoming increasingly intertwined…you may have noticed. Earlier this year we reported that The Guardian had notched up the best part of 4m downloads for its Facebook app, but recent data seems to suggest active users of social reading apps from The Guardian and others have begun to plummet. Why? Well as Nieman Lab notes, whilst fluctuations had been expected, something changed recently. Tanya Cordrey, director of digital development for The Guardian, said:

“We’re still learning a lot about our Facebook app, and as with all brand new content platforms, we always expect fluctuating degrees of usage. Since our app launched in September last year we have repeatedly seen upswings and downswings in use depending on the type of content being shared by users, and the way that this user activity has been displayed within Facebook.

Major changes made in the last month or so by Facebook have indeed resulted in a fall in usage since early April. However, this is not a signal that users are “abandoning” social reader apps, rather that articles which were previously surfaced predominantly in a user’s newsfeed are now much less visible.”

So it’s not all sweetness and light in the social news space, and it serves as a timely reminder that publications shouldn’t rely too heavily on traffic from social channels…they can only exercise so much control over it.

‘Facebook’ can sometimes be synonymous with ‘social media’, and this is all too evident over at Hulu, as Forbes reported. Whilst users could once connect through Gmail, Hotmail or Yahoo, Facebook has become the default – and only – means of connecting to the social sphere. “The company says it prefers to use Facebook Connect because it’s such a strong social platform,” said Forbes.

Remember Digg? Well, we all knew it was happening but All Things Digital reported this week that The Washington Post closed the deal to acquire some of Digg’s technology staff, who will now work for SocialCode, a Washington Post subsidiary that helps marketers buy ads on Facebook and Twitter.

Finally, an interesting case came to light this week, as noted by PaidContent. A publisher that sells nude model photographs is suing Tumblr, saying that it turned a blind eye to copyright infringement. It also accused Tumblr’s staff of uploading images themselves to jump-start the business. “Perfect 10 President Norm Zada claims the company has sent 6 detailed take-down requests to Tumblr but did not receive any response,” said PaidContent’s Jeff Roberts. 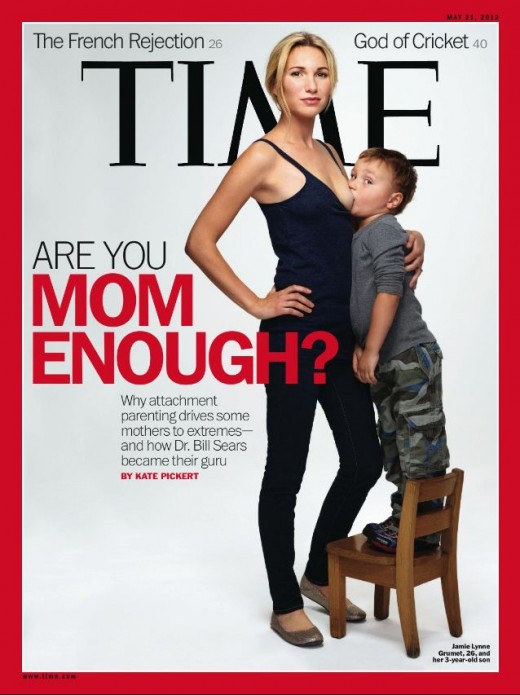 It was a scandal that rocked the media world. Well, I exaggerate, but it certainly irked a lot of folk.

Time magazine caused quite a stink in the wake of its latest cover, which features a 26-year-old mother breastfeeding her three-year-old son. And as Forbes wrote, “It was a taste of that controversy that convinced Rick Stengel, Time’s managing editor, that the story deserved to be on the cover.”

Personal opinions aside, Forbes questioned whether such controversy would be good for business, with retailers able to select which magazines they display, and which ones they don’t. Indeed, stores such as Kroger, Walmart and Target will often censor mags with risque content on the cover.

“Spokespersons for the retailers mentioned above weren’t immediately available for comment. An executive in consumer marketing at another publishing company predicts the chains will “have a fit” over the breastfeeding image.”

Whatever your opinion, there’s little question Time’s front cover got it a lot of attention, and may well even boost its sales as a result. Speaking of which, SFWeekly reported that desperate newspapers are pinning their hopes on annoyed readers, something that manifests itself in news sites’ comments section.

“Comments sections, in fact, are just another way for publishers to commodify readers, and to many publishers, the angry, illiterate readers are no less valuable than sane, thoughtful ones.

If comments sections didn’t drive pageviews, you can bet that most publishers would get rid of them. In fact, most of what newspapers do on the web is driven, not by reader empowerment, or even journalist-empowerment, but by the short-term quest for pageviews. Many of the tactics they employ annoy the shit out of readers rather than empower them.”

Perhaps a better tactic would be to follow the likes of The New York Times, a paragon for how news can make money in the digital age. And as Poynter notes, there’s still a lot of room left for advertising, it seems, as a means of getting new revenues.

The Times is looking to increase its digital subscription base by launching a new ad campaign, and is leaving the likes of The Washington Post far behind, with Forbes noting that the WP is in much worse shape than we all previously thought. AppData showed Social Reader’s monthly actively users falling from 17.4 million to 9.2 million over the past 30 days.

This is in addition to its falling revenues and drop in circulation elsewhere. Another reminder that, as with The Guardian, it’s best building a digital media model that can be controlled from within, rather than relying on third-party platforms.

Read it and weep

It seems that JK Rowling can do no wrong with her all-conquering boy wizard enterprise. Harry Potter has been killing it since it first arrived in digital format in March, and this week Amazon announced that all seven Harry Potter books will be coming to Kindle Owners’ Lending Library (KOLL). Amazon purchased an exclusive license from Pottermore.com to make the addition of these titles possible, though Amazon still won’t be selling the books directly.

Speaking of Amazon, Pando Daily this week noted that nobody seems to understand what the Internet giant’s founder Jeff Bezos is doing, questioning whether he himself knows. “I am frequently flummoxed by Amazon, the most inscrutable of all the companies I cover regularly,” wrote Pando’s Farhad Manjoo. “Amazon is the one major tech firm whose operations, investments, and short- and long-term goals are completely hidden from the reporters and analysts who try to watch its every move.”

So…are Amazon’s efforts well-targeted and does Bezos know exactly what he’s doing? Or is he simply winging it? We’ll let you decide.

We’ve known for a number of weeks that UK-based music-recognition service Shazam was lining up a landmark advertising deal with British broadcaster ITV. And this week, Britain’s biggest commercial broadcaster and Shazam announced the first of these ads were to feature during the Britain’s Got Talent grande finale, which took place yesterday.

The deal saw ITV become the exclusive UK distributor for Shazam-enabled broadcast advertising in the UK, and ITV has since signed up Pepsi MAX and Cadbury as the first brands to offer viewers the chance to use Shazam during adverts.

Elsewhere, in what is certainly a growing trend, Orange launched its hugely popular TVcheck app for second screens, after proving a hit with TV viewers in France.

The concept behind the app is pretty straight forward – it lets users interact and discuss programmes with other people, friends or otherwise, whilst watching TV in real time. It’s a little like Zeebox, another second screen app we’ve covered before. Whilst Zeebox is also compatible with subscription TV channels through its BSkyB partnership, at launch TVcheck will be restricted to 25 free-to-air channels in the UK, including the BBC, ITV, Channel 4 and Channel 5.

Finally, Microsoft’s Xbox 360 is now the leading non-PC digital viewing device, a report showed. According to its findings, the Xbox 360 game console edges out wireless devices such as iPad, iPhone, Android, and iPod Touch in terms of digital video viewing and ad consumption.

Poynter highlighted an interesting story this week, which helps to demonstrate that investigative journalism with a purpose is still alive and kicking.

Two young journalists managed to bring down a corrupt Kentucky sheriff through being smart and paying attention to the finer details in the case. Samantha Swindler, 27 at the time, had been managing editor of the Corbin (Kentucky) Times-Tribune and was looking for an attentive reporter to work with her on the story.

“I had to go through three different reporters before I found one who could really work on this with me because it was really hard to find somebody who wanted to do all the research involved,” said Swindler. You can see the interview with Swindler here: